Way More Than Ice Climbing: Climbing in itself can be an intimidating sport to enter, so attempting to enter a sport that combines climbing AND an ice ax seems even more daunting. Chicks with Picks tears down those perceived barriers by providing access, instruction, and support to enter the ice climbing world, from a bad-ass group of women. Today, Annie Hughes shares her Chicks with Picks story, and the inspiring women who taught her so much more than how to swing an axe. 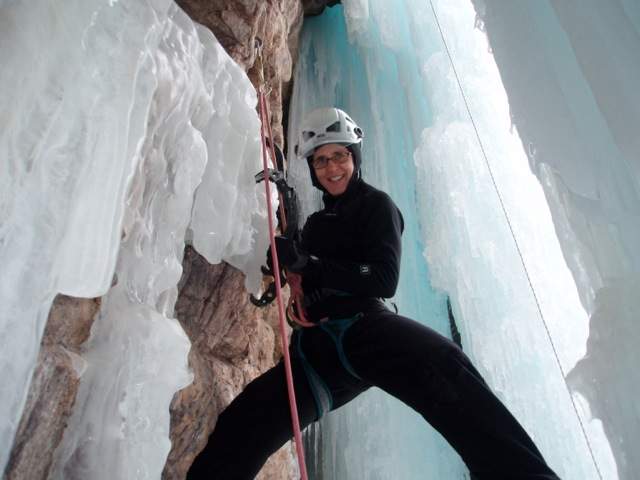 I took a stab at ice climbing 14 years ago when I was invited to the Michigan Ice Fest by a couple of my regular rock climbing partners. While her boyfriend worked at a demo gear booth, my girlfriend and I let ‘er rip, bashing our pointy crampons at ice and then attempting rock climbing’s drop knee moves. Drop knees don’t work on ice, let me just warn you right now! We pecked away with the unfamiliar axes, timidly at ﬁrst and then wildly, the left-hand swings often ﬂopping sideways on the ice like a frozen ﬁsh.

Don’t forget to check out another post of Leigh-Anne, here!

But we had fun wielding those sharp points and creeping awkwardly up gorgeous curtains of ice, shiny, white, blue and clear. We wanted more. We Googled ice climbing women, found Chicks with Picks and registered as soon as we could. There has been no turning back for me.

Betty, the Chicks with Picks mascot. And yes, she is smoking an ice screw.

Ice Climbing Is A Fun

The Chicks website features a sassy, sporty red headed beauty, Betty, with a distinctly sassy edge (think Thelma and Louise on ice.) The site promises safe thorough clinics taught by the world’s best female ice climbing instructors, dubbed “Girly Guides”. Google them and you meet women who are at the top of their sport — adventurers, alpinists, and frozen waterfall climbers.

You’ll see them in climbing magazines, even on the cover, and they are sponsored by major gear manufacturers who count on their accomplishments, strength as climbers, and personal integrity to inspire the rest of the ice climbing community. Climbing fame is no guarantee of teaching talent. So Head Chick, Kim Reynolds hires guides who also are devoted instructors, ready to take women as far as they can, from novice climbers testing themselves on a low angle ice ﬂow in Ouray’s Ice Park to multi-pitch lead climbers on seriously steep, long backcountry routes, handling complicated technical and safety decisions for themselves and their climbing partners. 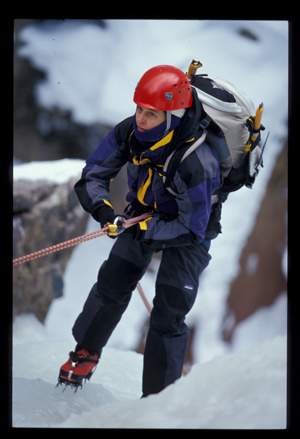 So there is attitude, and fun, along with the in depth instruction. And, somewhere on the website it hints that CWP is “way more than an ice climbing clinic”… I didn’t give that much thought when I said, “Hey, sign me up!” With all that was promised, if it came with something more, well, that would be the icing on the cake (the icing on the ice?). I’ve now been to a dozen CWP clinics! Call me an addict, but it’s an addiction that feeds the body and soul. Thanks to all CWP, I’m well equipped to ice climb independently, but I keep coming back for that something more. Now I know what that is.

Here’s the deal. Chicks learn the movement technique needed to ascend ice and to scratch their way up patches of bare rock or even entire climbs of only rock, no ice – called mixed ice (my favorite!). I’ve learned to stay warm even in sub zero, windy weather while standing still on belay, focused on my climber’s progress. I’m proud to know how to take care of myself in extreme weather. I know where to stand to be safest from falling ice.

There is a lot more falling stuff during ice climbing than rock climbing. Chicks learn to use and maintain their equipment and how to build and use various anchors and belay systems. There are optional day-long clinics at some CWP sessions on avalanche safety and rescue skills. Guides guide Chicks toward safe practices and give them experience making judgements and decisions. 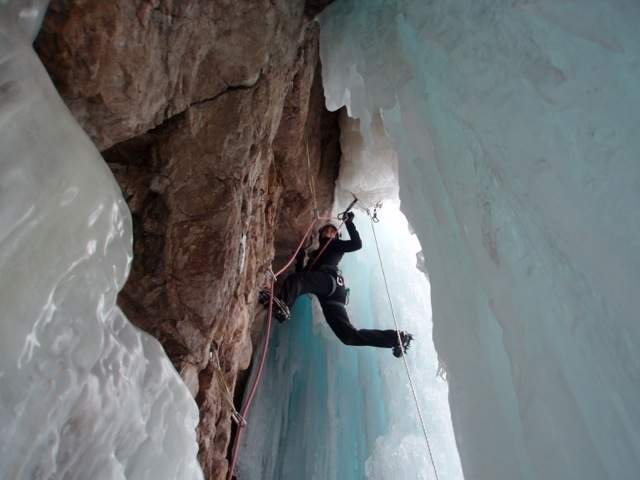 It’s instruction at it’s best, not mere guiding. Typically a guide shepherds clients safely through a fun day, taking responsibility for systems and safety while their group suits up, enjoys a snack, and waits for their turn. A CWP’s Girly Guide is of course the expert in charge but she imparts every bit of knowledge possible, every minute of the day, and presents exercises and experiences that will give her students practice so they can become the competent.

A Girly Guide will take her student’s goals into account and seek to meet their expectations. More often than not by the end of the clinic I realize my guide has provided what I asked for and then challenged me in ways I didn’t dream I was ready for (ah… I’m beginning to get the idea of “it’s way more than an ice climbing clinic”). 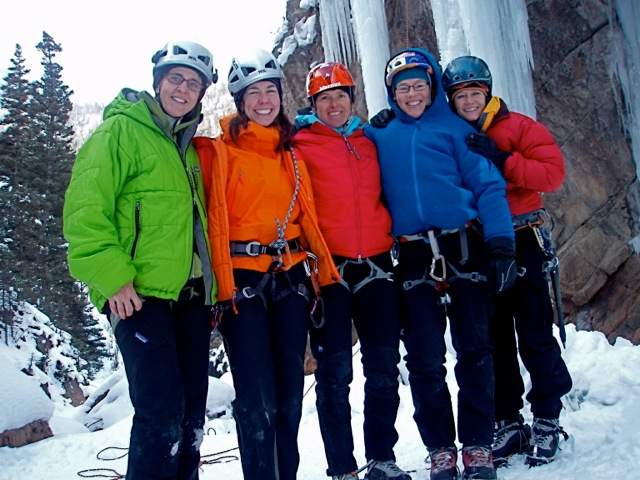 Unique and adventurous ladies are drawn to ice climbing and I have amassed a whole slew of mentors and heroes who inspire me. I remember one woman who was so old she lied about her age on her CWP application for the ﬁrst couple of years she came, afraid that CWP wouldn’t let her come if they knew how old she really was! Of course we loved her for her age and adventurous spirit. Her persistence earned her the nick name “The Energizer Bunny.”

At age 59 and a half I think of this woman more and more. There was the woman who moved to Ouray to win the ice festival competition, devised her own training regime and then grabbed the ﬁrst place prize she’d been aiming for. She has inspired me to have mental toughness and how to respond to failure and success in competition.

Then there was the woman who made it her business throughout an entire year to climb half the time with women who climbed harder than herself and half the time with women she could mentor. Paying it forward. Recently, that same woman gave up her usual climbing and workout schedule for months to help the victims of the Colorado 2013 ﬂoods rebuild their homes and lives. I value this kind of service and mentoring in my own life. 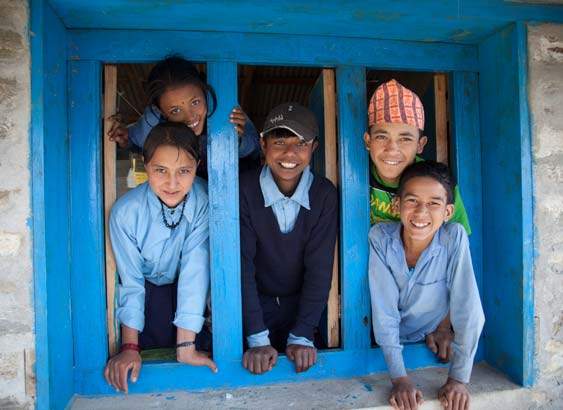 Chicks guides raised $23,000 for the dZi Foundation which promotes sustainable local development in the Himalayas

Helping Others To Support Women and Community in Nepal, India

A decade ago while at CWP, Chicks guides and chicks decided to mount an all women (almost all Chicks) ascent of Ama Dablam, 22,494 ft., in Nepal which raised $23,000 for the dZi Foundation to start a safe house for girls in Sikkim India. They did it without high altitude Sherpa. Another amazing Chick took her midwife skills abroad, working year after year in the most war torn, poverty stricken countries in Africa. There are women who uprooted their lives after being inspired by their Chicks experience and became guides themselves, sharing their outdoor passions with others.

I have become a better instructor in my local climbing gym by watching Chicks guides teach so effectively. There have been many Chicks who because of challenges faced while climbing ice, found they could now face scary and disruptive situations such as a career change, a move across the country, or ending a relationship that was no longer positive.

Many women at Chicks have become friends, though in different states, and they get together to climb, to support one another through depression, recovery from illness, injury, or personal loses, grief and other challenges that I’ve got to say are really way more important than climbing. These women know the value of giving back and are good friends, mentors, volunteers, business owners, family members and employees…yup, way more than ice climbing. 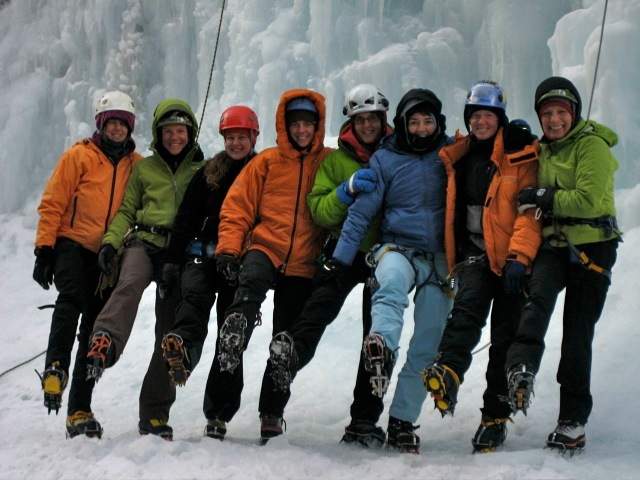 Take the Head Chick herself, Kim Reynolds, who turned her passion for an admittedly self centered activity, climbing, into a number of pathways that improve lives. She founded the dZi Foundation as a result of encountering a struggling orphanage while she was on a personal mountain climbing trip in Nepal. dZi works in poor regions of the Himalaya to build sustainable locally driven programs that advance education and health, and reduce poverty.

When Kim founded Chicks with Picks she included a fund raising component — to date, CWP has raised $176,000 for Colorado women’s shelters and $17,000 for the Ouray Ice Park, where most CWP clinics are held. She is a talented life coach too, helping her clients know themselves and achieve their goals… I ended up as Kim’s coaching client during a time of transition in my own life. I came out the other side feeling rock solid, having checked in with my passions and values and able to make sure my life was in line with those convictions. …Stuff that is way more than ice climbing.

And that’s saying something since ice climbing is my favorite thing to do! I can only hope that I’ve been able to pay it forward myself by being an example to others the way so many Chicks have been to me.

Thanks for sharing your story with us Annie and inspiring us all to use climbing (and ice climbing) as an outlet to live a full and meaningful life!

Annie Hughes is a mentor, friend, and instructor, at her home gym, Boulders, in Madison, WI, where she serves as an ambassador to new female climbers, after getting her start climbing with the Madison Women Climbers in 1996. She also serves on the staff of Chicks Rock Devil’s Lake, a Chicks Climbing rock climbing workshop held in Wisconsin each summer. When not climbing, she volunteers with the elderly, children, and visual arts and has recently gotten into rowing (She took third in the World Indoor Rowing Championships). By the way, Annie will be 60 this year and explains that, “My sports keep me happy and healthy and strong, while my friends and family give my life meaning.”