Haven’t heard his name before? Try his internet persona: The Climbing Narcissist. If you were obsessed with climbing in 1994, you wouldn’t have had at-the-crag access to DPM’s archive of beta videos on your smartphone. You’d have had to wait 3-4 months after the fact until Rock and Ice hit the shelves of the local gym to find out that Sasha sent a 5.14d on American soil. Climbing was forcibly more personal, local, and sub-cultural. 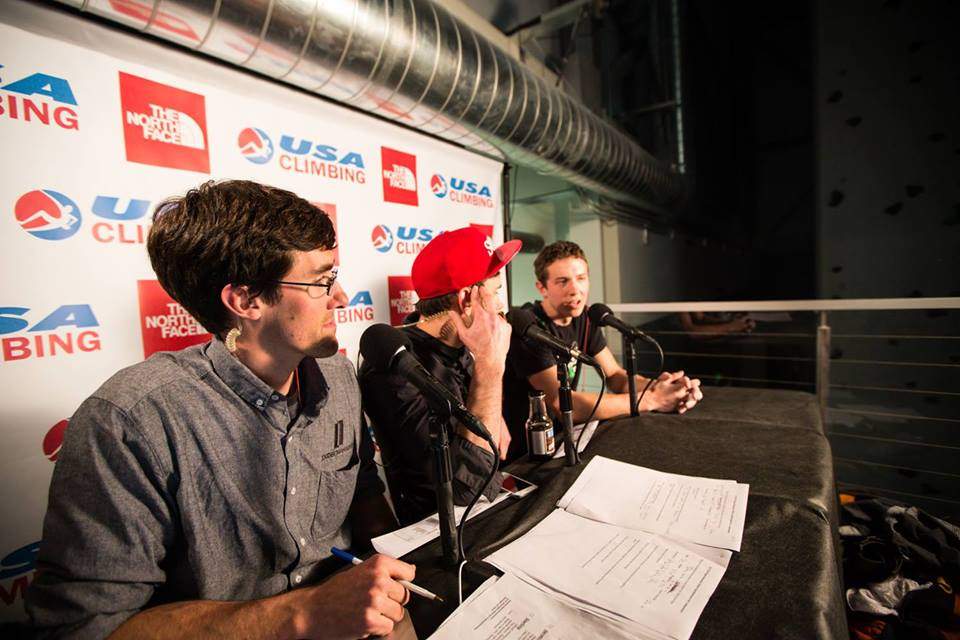 Climbing in 2014 is an entirely different world. Not only can we find out within hours of clipping the chains that Sasha sent 5.14d, but thanks to Instagram we can see what she ate for breakfast before climbing. Whether you call it progress or commodification, it is quite clear that the reigning “King of Internet Climbing” is 30-year-old Wisconsin native, computer programmer turned blogger, Brian Runnells.

Flash Back Seven Years Ago

Runnells had a habit of wasting copious amounts of time combing the internet to get his climbing gossip fix. In order to spare you the pain of this same addiction, Runnells started Climbing Narcissist on a whim in 2007. Until last year, Brian ran Climbing Narc from Wisconsin, known more for the Packers and cheese than being a climbing mecca (although I do have a special place in my heart for Devil’s Lake, Governor Dodge, and Necedah, where I learned to climb). Despite being (physically) outside of the climbing “scene” (aka Boulder),

Climbing Narc quickly earned the title of “best climbing blog,” sure evidence that the Internet has removed geographic limitations on climbing culture. “The globalization of climbing has been huge for my site, and is really the only reason it was possible from the outset,” says Brian. Thanks to computers, you can be up to date on Ondra’s recent send or Daila Ojeda’s gorgeous project whether you’re in Tonsai Beach or Poughkeepsie.

The Internet Has Given Voice To The Voiceless Climber

Those average everyday climbers from anywhere. It’s pretty hard to see this in a bad light, since location and prowess shouldn’t define the members of our community. In a sense, we’re more tightly knit as a whole now: “I’ve “internet met” someone from a random place and then met them in real life down the road.  I think that will always be my favorite thing about doing the site,” shared Runnells.

However, even for someone as Internet-famous (at least in the climbing world) as Brian, his influence in the climbing arena still catches him by surprise. “I’ll have competitors come up to me at the event talking about things I said about them on the broadcast.  I think I just always assumed that [the] people I was writing or speaking about wouldn’t ever pay attention to what I was saying, but that apparently isn’t the case…

As far as having influence goes, that has been an odd thing to see happen over the years.  I still tend to have the mindset from when the site’s traffic numbered in the teens, and now that it’s grown to be thousands per day I sometimes forget the reach the site and the words put on it can have on people.”

Regarding his recent move to Boulder, CO, Runnells confirmed that screen time can never fully replace old-fashioned being-there. “Being more plugged into the scene out here has opened up opportunities for me to attend more events, to host a live talk show with cool guests and to meet a lot of the people I’ve written about over the years.  In a lot of ways these things are a culmination of all the hard work I’ve put into the site over the years.”

However, proximity to climbing and climbers does not always make writing about climbing easier. “The major downside is that it’s hard to write about a lot of the topics I do once I’ve gotten to know these people I’ve spent the last 7 years posting about.  It’s one thing to write about someone when you don’t know them and/or never see them, but it’s quite another when you know you’ll probably see them whenever you go to the gym or the crag.

It’s not that I’ve made a habit of writing negative posts about people in the past and now I’m afraid to do that.  For me it’s more a matter of it always having felt a bit awkward to write about other people, and that’s only gotten worse now that I actually know and like many of them on a personal level.” 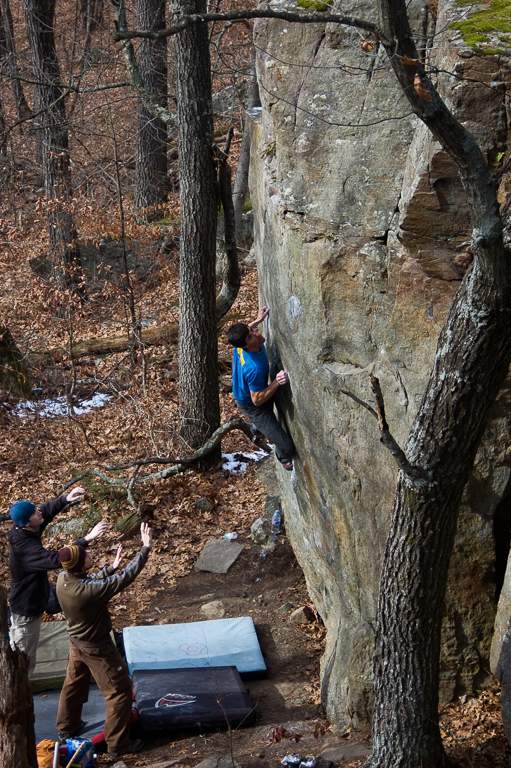 Brian Runnells in his native state of Wisconsin at Governor Dodge

The other downside to moving to the heart of the US climbing scene is that his under-the-radar-internet-pseudonym cover has been blown. “Until recently, I could climb pretty much anywhere outside of my home gym and not get recognized for being the ‘huge internet celebrity I am. The past year has seen me spend a lot more time in front of the camera though, so those days may be coming to an end.

I might need to step my game up or just grow a Jimmy Webb-style beard to throw people off,” joked Brian. And then there’s the pressure to be able to climb with the big dogs, for better or worse. “There are so many good climbers here in Boulder that it’s hard not to feel some pressure to become a better climber. I think I would have felt that regardless of whatever my status in the community happens to be though.  Nobody likes feeling like a punter in front of Lynn Hill or Daniel Woods.”

We all face tight shoe problems at any stage, so check out these 5 simple steps to break in too tight climbing shoes.

He stays true to his personal mantra: “Stay brave and humble” and dismisses the impact of the industry and media on the everyday climber’s experience. Says Runnells, “Certainly climbing media has some impact on climbing, but for the average climber I’m not sure how much of an impact it really has.  The media can play a big role in popularizing areas or certain professional climbers, but at the end of the day that doesn’t have a ton of impact on your average climber on a day-to-day basis.  Most people still go to the gym during the week and try to climb outside on the weekends.” 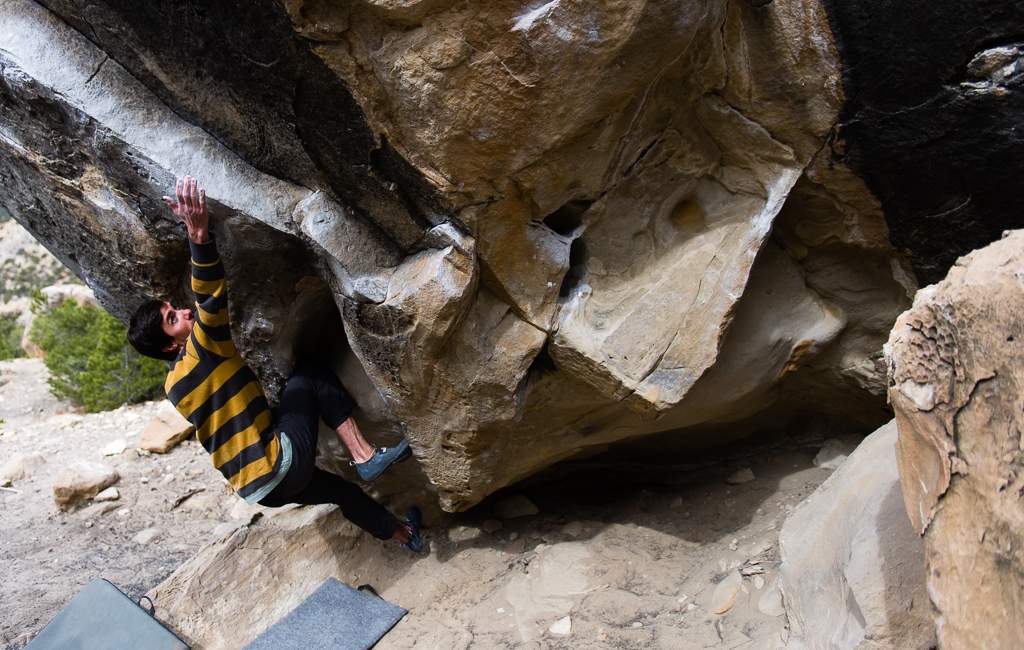 Climbing media may have little influence on the average climber, but Runnells isn’t pulling his punches when it comes to the role of the internet and social media in professional climbing and the endless pursuit of sponsorship. “Right now, the only thing I would like to see less of in climbing media is pro climbers being [un]able to post a picture to Instagram without mentioning and hashtagging all their sponsors.

What I would like to see more of in climbing media is more reality surrounding the portrayal of professional climbers.  I feel like a lot of the media’s portrayals of the pro climber lifestyle is not very realistic in that it generally ignores the… long term prospects of being a professional climber and/or ignore the fact that most ‘professional’ climbers don’t make anything close to what people would consider a profession in any other walk of life.  I suppose that part of the problem is that much of the climbing media these days, at least in video form, is paid for by sponsors and it wouldn’t really behoove them to get into this sort of thing.”

While we can’t predict the next step in the evolution of climbing, we’re certain that Brian Runnells helped shape climbing Internet culture, and single-handedly changed our experience of the sport. Beyond chronicling the gossip and achievements of professional climbers, the ‘Narc gives all of us unique access to crags, climbers, king lines, and choss. In a way, the ‘Narc has managed to push through the videos, ads, and “pros”, and quietly make sure that the core of our culture remains a humble love of climbing. That’s keeping it real.

Thanks Brian for taking the time to talk with us! See ya on the Internets!

In the words of Climbing Narc, “Be brave and humble”…and climb on! ~Cate