Let’s have a look at climbing’s next generation. With all the amazing things young guns are doing across the world, it can be easy to forget that we’ve got a few impressive ones here at home. Today we’re recognizing the efforts of Bimini Horstmann (15 years old), Katie Lamb (17 years old), and Lily Canavan (16 years old), who are right in Crux Crush’s backyard. At the end of 2014, these three out-climbed other formidable little crushers to bring home some hardware from the PanAm Championships in Mexico.

(There is always an excuse/debate on a “specific climbing body image,” here is the survey).

If you’re from the Boston area, you’ve probably seen these girls at local comps, gyms, and crags. They are a great reminder that the next generation is quietly and tirelessly working in your local gym…even if most of them don’t have their driver’s license yet. 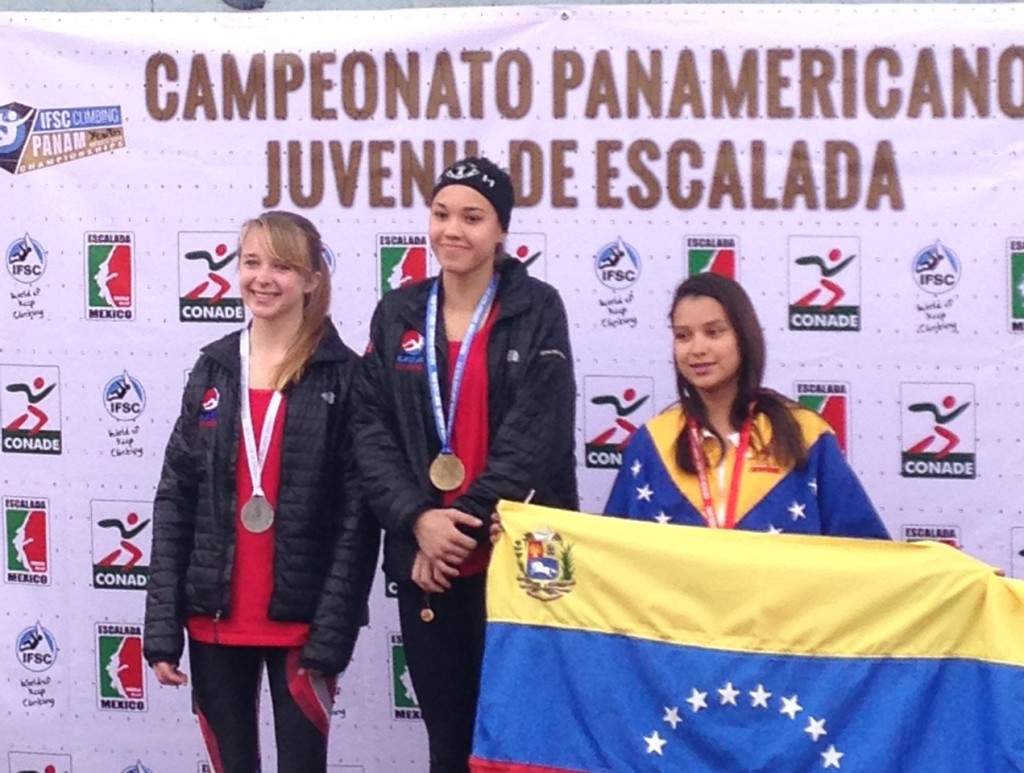 CXC: When I was a kid, there was an overwhelming amount of sports to be a part of through school and local community centers. How did you end up finding climbing?

Lily: For a birthday party, I went to a gymnastics place that had a climbing wall. Fred, the guy running the birthday party, convinced me to join the team at that wall. When he moved to the Rock Spot, I joined the climbing team there. Eventually I quit ballet, figure skating, and swimming, just because I was having more fun at climbing practice.

Bimini: I was taking classes at the Newton YMCA and really wanted to keep climbing. We searched around for a team, and my mom (who knows Lily’s mom) saw Lily’s name on the Rock Spot website. So I also joined the Rock Spot team. I ended up quitting softball, and then swimming as well. Swimming especially was hard on my skin.

Katie: My whole family started climbing when I was still really young. I didn’t really have an option so we’d pack toys that I could play with at the gym. Eventually I decided to join the Boston Rock Gym’s Team Waimea, and at some point, I got to the age where I really started to try.

CXC: How do you balance time between training for climbing with school hours, extra-curriculars, and even your non-climbing friends?

Lily: Usually I just get less sleep. I know a lot of people who don’t do any sports at all, but they get the same amount of sleep as me, because they procrastinate. Having so much to do gives me motivation – even the days I don’t climb I’m more productive and get work done.

Bimini: Sometimes you have to make hard choices. Earlier in the year, I qualified for World’s in Australia, but I would have missed 2 weeks of school. For the most part, I’m pretty self-motivated and my parents step in to help motivate me when I’m running on fumes. I’m lucky because most of my best friends are climbers, so I spend a lot of time with them.

Katie: On weekends, I try to go to school events, or at least make sure I’m not doing homework on a Saturday night. I’m part of the Improv Troupe, make costumes for schools plays, and play the piano. I try to keep my climbing life separate from my school life. My other friends hear about what I do, but I generally try not to go into the specifics or bring people climbing because I don’t love feeling better than people at other things or feel like I’m showing off.

CXC: How did you try to handle the mental pressure of being at PanAms?

Lily: I’ve never been to a PanAms before, and in some ways, because I didn’t know what it was going to be like, I wasn’t as worried as I’d be at another comp. But I tried not to think about the results throughout the comp so I wouldn’t get nervous. We got there a couple days early to explore and tried to go to the Pyramids and eat good Mexican food. 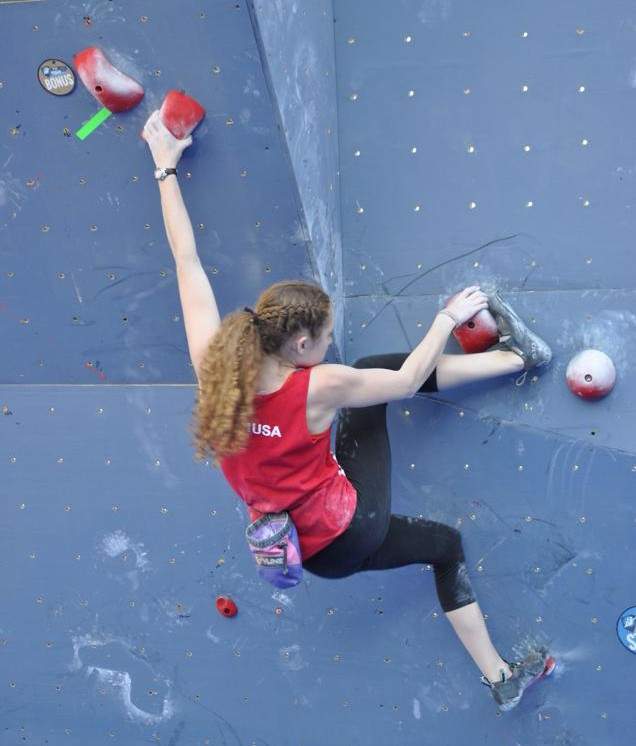 Lily Canavan focused on setting her toe on the fourth qualifying boulder at PanAms. Photo by Lori Bolin Buhrfeind.

Bimini: I wasn’t that nervous because I’ve been to PanAms before, but this one was different than other comps I’ve been to. They weight the climbs (so if one climb only got one top, the person that topped it would get more points). It was also outdoors, so climbing could be affected by conditions (though it was beautiful!). This year, my team also trained with a mental game coach who taught us competition strategies and ways to relax in order to compete at our best levels. I’ve found that even if I’m not in the best physical shape, a strong mental game can more than compensate for that weakness.

Katie: I had to costume a play the week before Mexico. I showed up and climbed the first qualifying day, trying to remember to be loose. I was there for sport climbing, but back in the States we’d already transitioned to bouldering season. I just didn’t want to embarrass myself. It was nice that I knew the majority of the kids on the US team. We’ve been collectively doing better in international competitions, and have come together to really feel like a team. We have US team meetings, go to Opening Ceremonies, and represent the USA together. 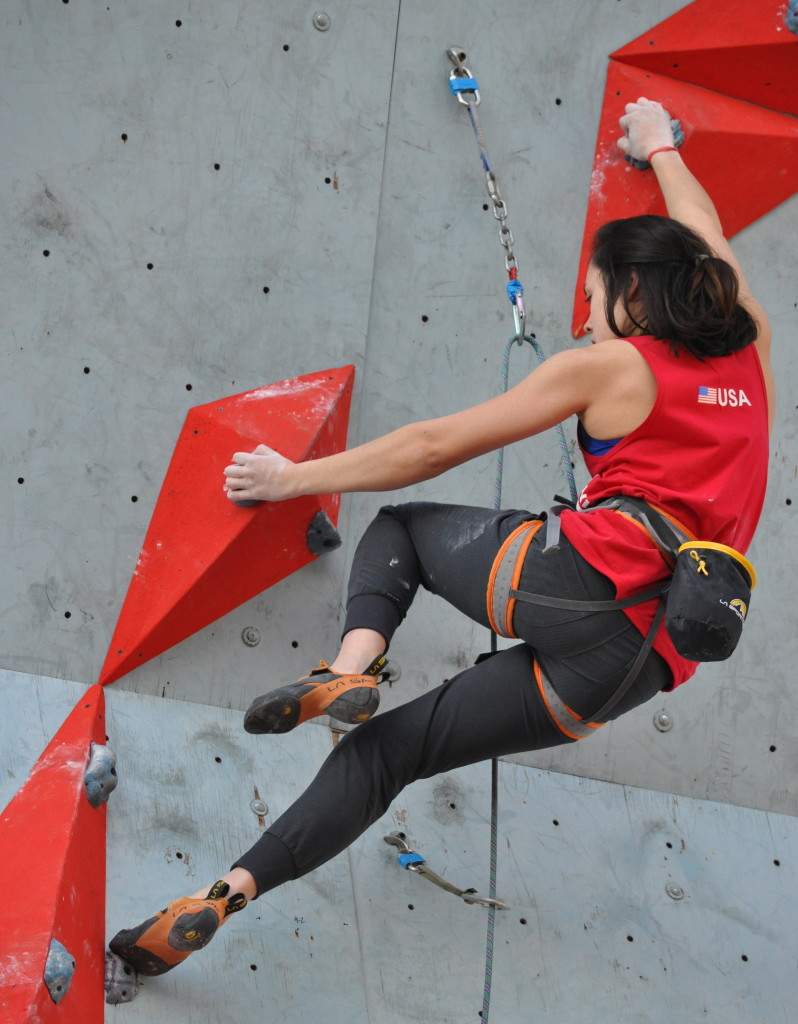 Katie Lamb navigating new angles through a section of volumes at PanAms. Photo by Linda Lee.

CXC: There is so much camaraderie in climbing and between you three girls, but how do you support each other while still trying to compete against each other?

Lily: For PanAms, we all happened to be competing in different disciplines or categories so it was really easy! We are good friends, and I always want Bimini and Katie to do well. You sometimes hear about those stories at gymnastics meets where kids cheer when someone falls. You’d never see that in climbing.

Katie: We’ve known each other for so long, and we all have days when we beat each other. But being on the US team together also means we get the chance to build these bonds when we’re in unfamiliar environments together. 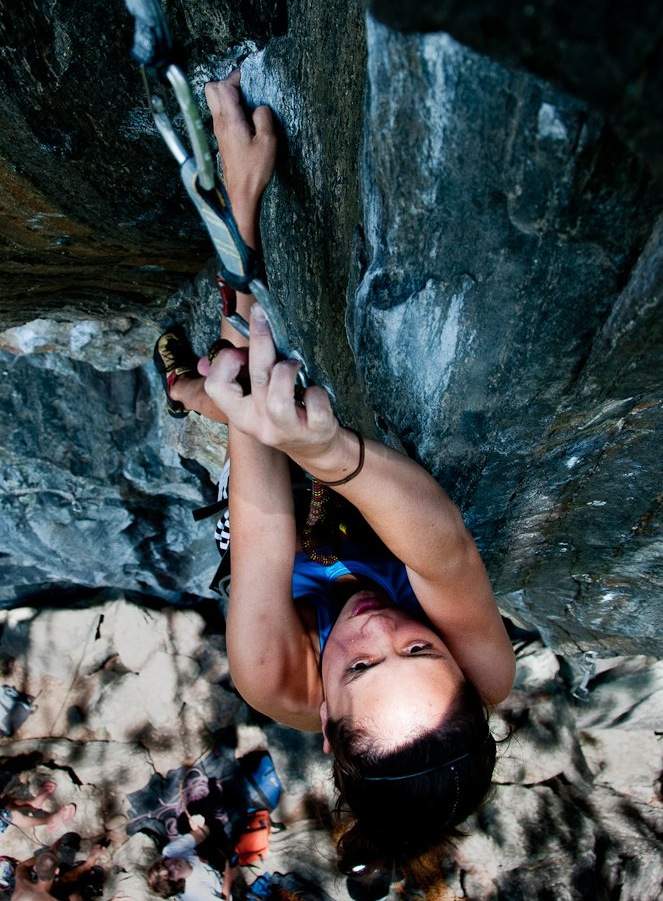 Katie Lamb making sure she gets a chance to try hard outside on projects as well. (Muscle Beach 5.13a/b, Rumney, NH)

Bimini: We all push each other, and I know I wouldn’t be nearly as good without the other kids. I think we’ve all seen that the younger kids are generally getting more competitive with each other as they’ve gotten stronger earlier. It’s really important that we set good examples for the next generation. My little sister got 8th in bouldering this year at Nationals, and I’ve loved supporting her. When she gets nervous, I like to talk to her about how I used to deal with my nerves, and I see her and her friends pushing each other in practices the way my friends and I do.

It’s incredible how much skill and dedication these girls have in order to manage their many activities, but also how thoughtful they’ve been about the community they’re representing and helping to nurture. Now that you know a little about these girls, are you excited to see them in their bouldering element? They’ll be at the Dark Horse Championships, competing with the pros, on January 31st in Everett, MA.

Thank you to regular contributor Lily He for writing this piece and to Timothy Roy for suggesting a profile on Lily, Bimini, and Katie.