Today’s post continues our analysis of the 2,014 responses to our climber body image survey.  If you look around the climbing gym or the crag, of course, you’ll see some degree of variety in body type, but by and large, we can probably agree that what we are going to see are people who have less body fat and more muscle than the general population. So how does this affect a person when they spend a lot of time with this cohort? Personally, I have realized that spending a lot of time with ultra-fit folks causes my view of reality to be a bit skewed. 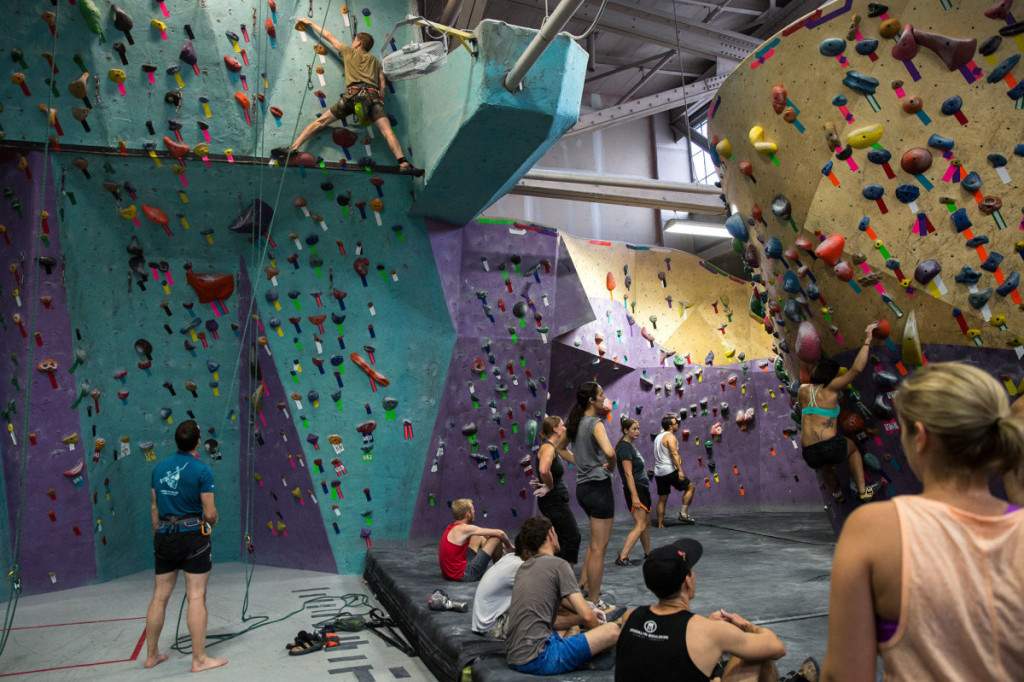 I have had my moments of being at a climbing gym and feeling like, “Man, if only I was like 10 pounds lighter and my thighs weren’t so damn huge I could probably send that climb,” only to go to a regular gym or some random social situation and have people actually remark on how fit I look. After reading through our survey results it was a bit of a relief to see I’m not alone in this experience, but at the same time it’s been saddening to hear the painful experiences people have when they feel they don’t measure up to what a climber “should” look like.

Is There A Right Body Type For Climbing?

In our first post on body image, we looked at some of the ways in which climbing improved body image. Today we look at some of the more negative trends including a surprising find about male climbers and their body image issues. We conclude with a deeper look at the question “Is there a right body type for climbing?”

You’ve heard comments like these at your local gym or crag before: “Of course, she can send that climb – she weighs like 5 pounds” or “Obviously he can do that move, look how tall he is.” As human beings, most of us compare ourselves to one another in some area of our lives, and it appears that climbing it’s no different. Many respondents who completed our survey echoed the sentiment that they didn’t have the “right” type of body for climbing, many expressing a wish to be thinner, taller, or more muscular. They look at the bodies of the pros they admire, or the other climbers at their gym and think “Is that what I have to look like to be a strong climber?” 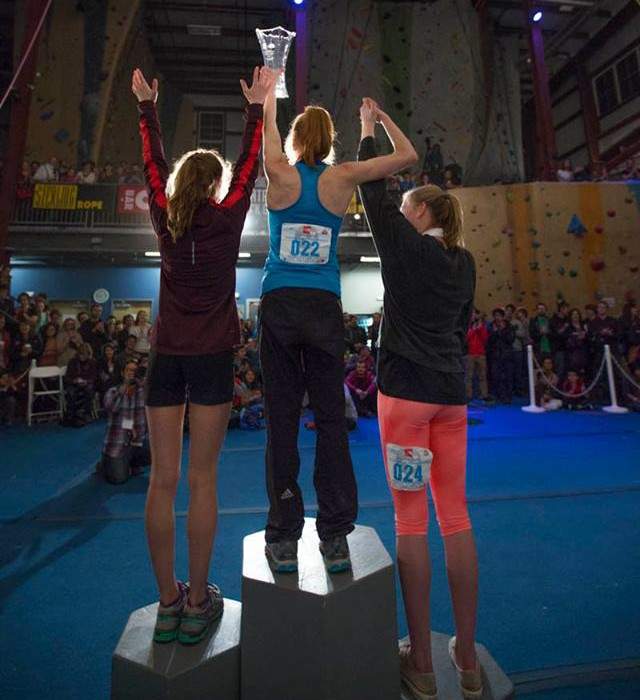 To begin unpacking this idea of the “right” body type, let’s first define what that means. One female respondent sums it up quite well in this quote “I feel very pressured to be thinner for climbing. I’m very strong, but I will likely never be thin, and I think that it holds me back…I don’t have that classic thin, long-limbed climber body…” So for women maybe we picture someone who is muscular, but not bulky, and with little body fat.

For men we picture something similar – broad shoulders, smaller hips and legs, muscular but not bulky, with little body fat. And where do we get this idea? Well, partly it could be just sheer physics. Muscle helps you to get up the wall, fat is excess weight, and the lower the weight the easier it is to pull oneself up, right? Sure. But that body type is not as easy to achieve or maintain for every person. Some of us put on muscle really quickly, others struggle to keep weight on, and some of us store fat like it’s our jobs.

Take three people and have them eat and exercise exactly the same and their bodies are all going to do different things. So given that, how does the concept of the ideal body type affect those of us who have a harder time achieving or maintaining it? 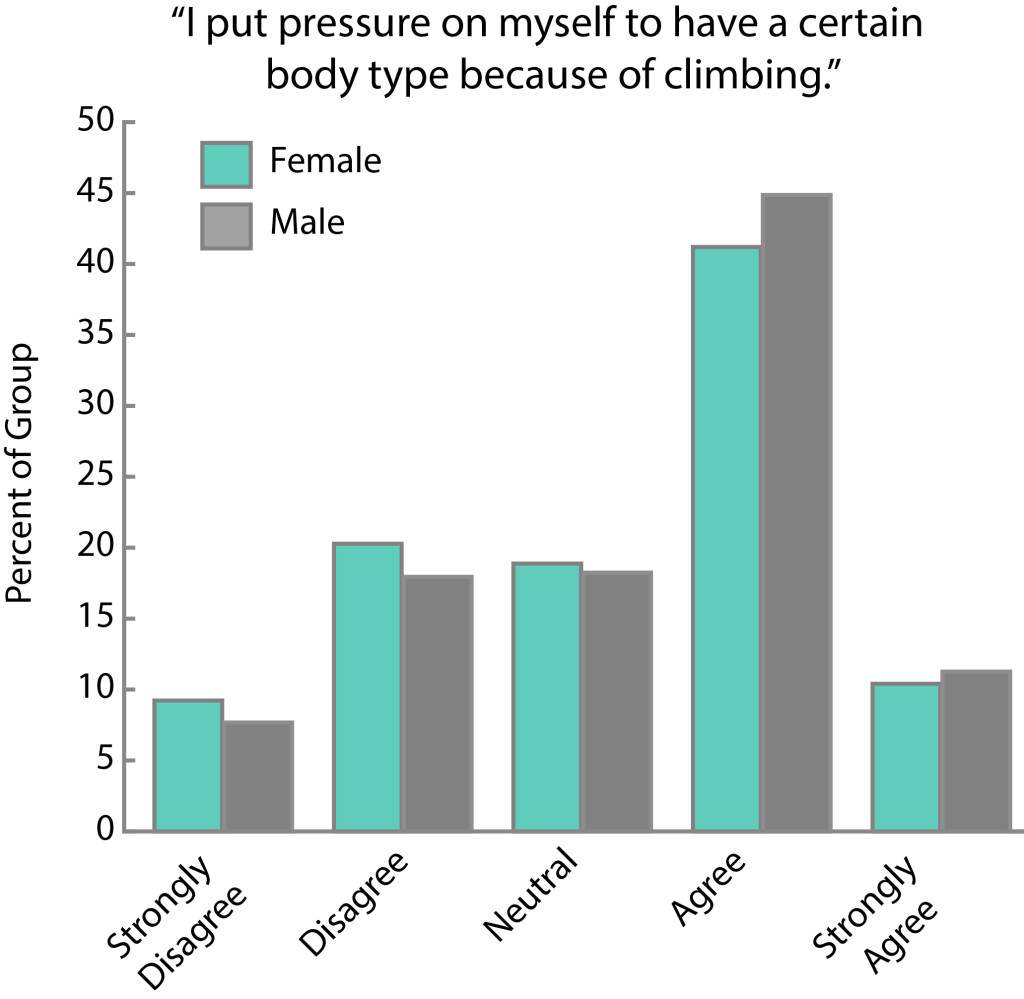 More men than women put pressure on themselves to have a certain body type for climbing.

One group that might be more affected by this idea than we realized is men. As discussed in the first part of this series, far more women than men said that climbing did not help their body image. However, it turns out that the males were significantly more likely to respond that they put pressure on themselves to have a certain body type than females.

To be honest, this initially surprised us. We’ve all heard the stereotypes about male climbers and how much they all just love to strut like peacocks and climb with their shirts off and beanies on. However, there seems to be another side to that stereotype. This finding prompted us to look a little further into what might be going on. Is this unique to male climbers? Or is this trend actually consistent in the general population? What we found surprised us even more.

Why Male Climbers Put More Pressure On Themselves: NEDA Report

According to the National Eating Disorders Association (NEDA) “Large scale surveys concluded that male body image concerns have dramatically increased over the past three decades from 15% to 43% of men being dissatisfied with their bodies.” NEDA has data to suggest that men have more of a focus on muscularity and strength (while women put more emphasis on thinness) and that there is emerging clinical prevalence of what is being called “Muscle Dysmorphia” a disorder wherein “the individuals obsess about being inadequately muscular”.

Alarmingly, NEDA also states that men are far less likely to seek treatment for eating disorders than women, despite having similar rates of occurrence. As a way of explaining the rise in prevalence of such disorders in men, NEDA cites studies that link rates of disordered eating in men to a documented increase in sexualization of men, as well as an increased cultural emphasis on an ideal of muscularity. Perhaps the pressure male climbers are placing on themselves to have a certain body type are for these same reasons.

One of our male respondents from the 30’s age group remarks, “When I’m training hard I do believe that my body fits American ideals of what is attractive…flat stomach, muscles, low fat percentage. It can be a double edged sword though. When I train less or my diet goes out of whack I’m fast to start hating my own body…”  Though we aren’t sure exactly why male climbers put more pressure on themselves to have a certain body type for climbing, it’s clear to us now that male climbers are not exempt from putting this pressure on themselves.

Another finding that was somewhat less surprising was from the female respondents. We found that while men put pressure on themselves to have a certain body type, women felt more of a sense of pressure from the community. One obvious theory to explain this could be that women in general feel an expectation placed on them by our culture to have a certain type of body. However, we also see that, as noted above, there is evidence to say that men also experience a sense of societal pressure as well, so perhaps the answer is more complicated. 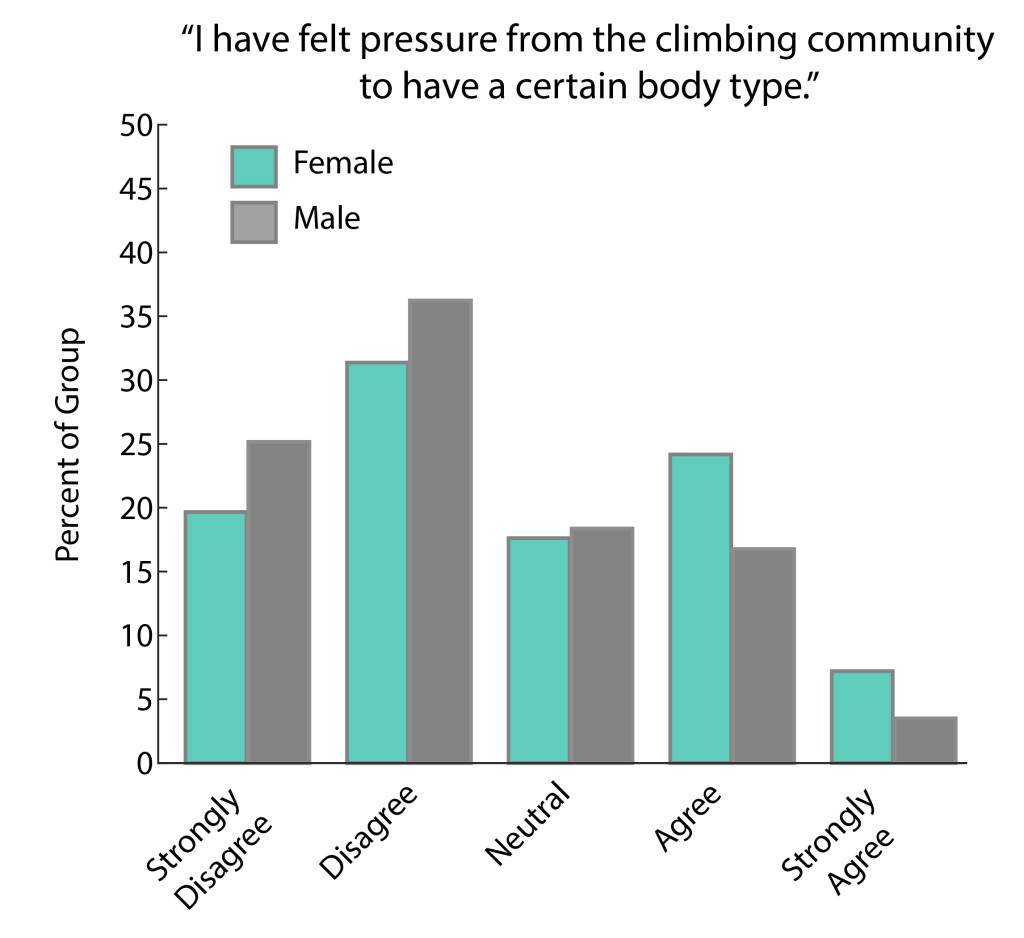 More women than men feel pressure from the community to have a certain body type.

Another theory I would put forth is that perhaps there is a difference in the way women talk about their bodies when they are in groups that men don’t experience in the same way or to the same degree.  For example when you get a group of women together it seems that the conversation is almost always peppered with self-deprecating jokes about one’s own body, or conversations about how one “ate badly” or “eats so much”, or whether one lost or gained weight and why (which is why this very NSFW video is funny – because it’s painfully true).

This is purely speculation on my part based on my own life and conversations I’ve had with other women who have noted the same phenomenon (so much so that I have one friend who instituted a body-shame/food-shame free policy with her friend group). This is also not to say that men don’t talk badly about their own bodies, or that they don’t even criticize one another (because we heard from respondents that they definitely do) but perhaps this is happening among groups of women at a higher rate. 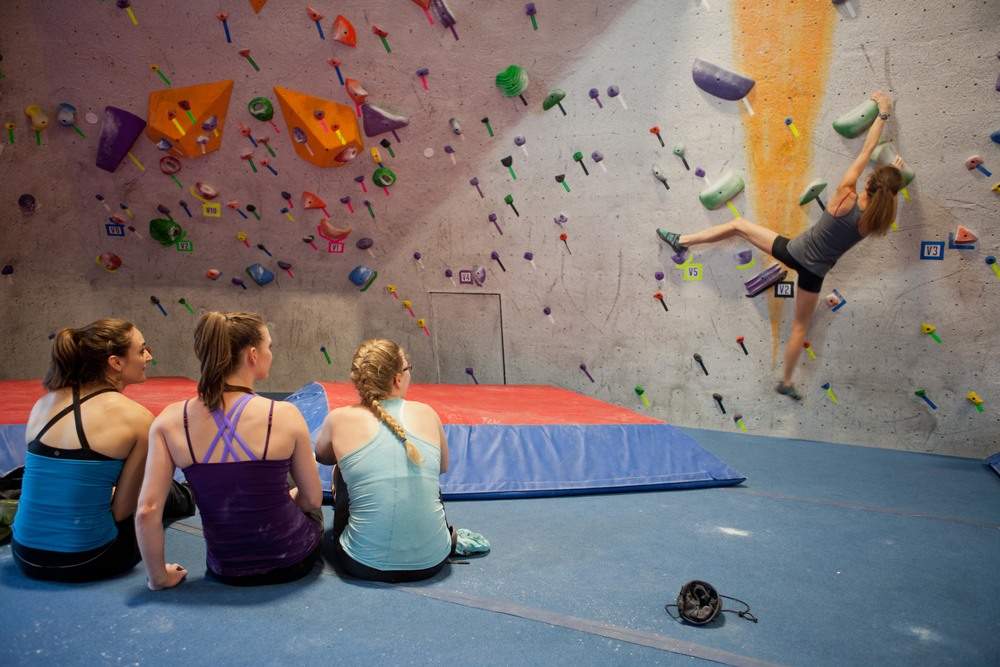 Another theory could be that females in our community are comparing themselves to the pros in our sport. One respondent in her 20’s says “I’m maybe 10 to 15 pounds overweight and am constantly hearing about how I need to drop weight to become a good female climber. I love that there are strong female climbers out there serving as role models, but I sometimes wish they were not all very, very thin and climbing in sports bras and spandex short shorts.”

Another respondent shares a similar sentiment, “It’s awesome seeing professional athletes with different body types like Meagan Martin, but even at the gyms, it’s frustrating seeing climbers with super nice bodies and not feeling like I match that. I definitely don’t consider myself fat or anything, but I’m not nearly in super good shape and sometimes that makes me more self conscious.” In our third installment next week we will look further into the role of pro climbers in the area of body image, as well as delve deeper into the sad and scary findings around extreme measures to lose weight among pro climbers.

To sum up, we have learned that while overall people feel climbing improves their body image, there is a significant portion of our community who feel a sense of pressure, both from within and without, to have a certain body type. While our survey doesn’t get into the exact reasons behind this, and leaves room for further research, we don’t think it could hurt for folks to try to take a kinder stance towards both themselves and others in their words and actions.

One of my favorite quotes we received was from a male climber in his 30’s who said, “Rock climbing teaches a great lesson – there is no perfect body type. Climbers quickly learn that certain body types which make one situation easier often make others harder. Smaller climbers can use smaller holds. Taller climbers can reach over a crux. Tiny fingers are best in small cracks; and big hands in wide jams. Climbing lets us celebrate every body’s strengths.”

It can be easy to get caught up in all sorts of pressure and forget this truth about our sport – probably one of the things that draws so many people to it! And lastly, next time you catch yourself starting to hate on your own body, think about where that might be coming from and how it might be affecting you and those in our community.