Today Chelsea shares her story & useful tips for conquering a fear of falling with you.

Chelsea has been climbing for 11 years and has dedicated her life’s work to outdoor education as an Outward Bound instructor. The self-proclaimed lover of all styles of climbing: bouldering, sport, trad, mountaineering, and ice, has worked hard to overcome her fear of falling. 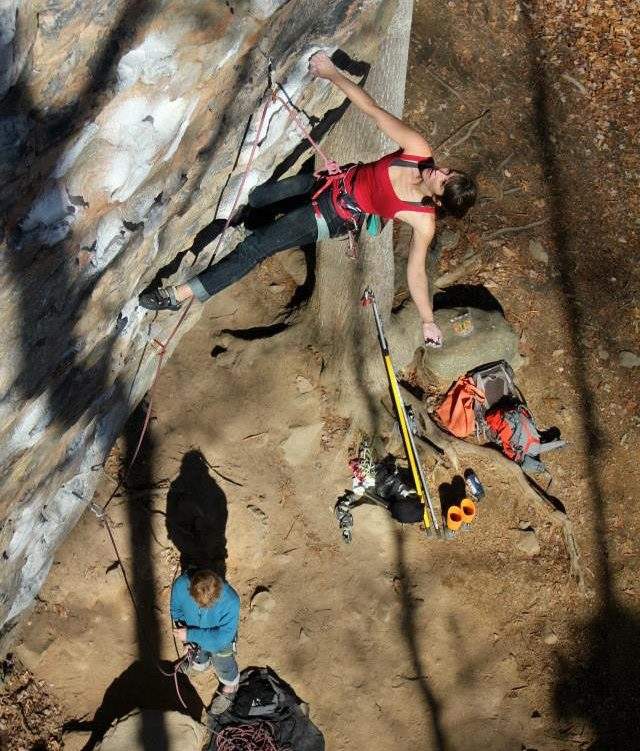 Chelsea on Fuzzy Undercling (5.11b) in the Red River Gorge. Photo by Erik Thatcher.

I was fed up, utterly frustrated, on the brink of quitting climbing all together.

I had spent the majority of my decade-long climbing career not climbing anywhere close to my physical limit. Here I was, an Outward Bound Instructor whose job it was to teach people to push their comfort zones in order to learn what they are truly capable of, and I was not able to do that for myself. It’s not because I didn’t want to. I really did want to know what it felt like to try hard and climb while pushing my physical limit.

Tips For Conquering A Fear Of Falling

There are two types of fear: Rational fear where there is a genuine risk present, and irrational fear, which has to do with perceived risk rather than actual risk. For me, it was this second type of fear that dominated my thoughts and kept me from performing. I had explored articles, books, and blogs by famous climbers about overcoming fear. Many of these spoke to risk analysis of the rational fears I mentioned above, but no techniques resonated with me.

As was taking a couple of rest days in the Red River Gorge last fall I started to really think about the causes and possible solutions for overcoming my fears. We were in Louisville visiting my parents, and I was talking about my battle with fear with my fiance and my mother, who is a therapist. I walked away from that conversation with some new ideas and tools for attacking my fear of falling. I had a game plan, and it was time to go back and put it to the test.

Entering the crux sequence (and big whipper territory) on my project Bettavul Pipeline (5.12a) at Bob Marley Wall. Photo by Beth May.

I decided to set daily goals as well as goals specific to each climb. These goals were not directly associated with sending a route or climbing a certain grade. Rather these goals followed the SMART goal format: Specific, Measurable, Action-oriented, Realistic, and Timely.

For example, I would tell myself, “When I get to the crux on this route, right before the traverse, I am going to shake out for a few seconds and then climb. Even if I am pumped and think I can’t do it, I am going to go for it. And if I fall, it’s okay, but I will not say take at the bolt.” The goal is specific to a certain section of the route, but a goal that applied to the whole route could also be specific such as, “I am going to climb until I fall, not saying take at any of the bolts.”

The goal is measurable because I know that I have succeeded at my goal, if I do not say take at the bolt and instead continue climbing into the “scary” crux. The goal is action-oriented and realistic, unlike saying, “I am going to climb 5.12 today.” Once the goal was accomplished, I could relax and feel SUCCESS! All of a sudden I did not have to send a route, or red-point a certain grade to feel the magical elation of success! All I had to do was set a SMART goal and execute it. 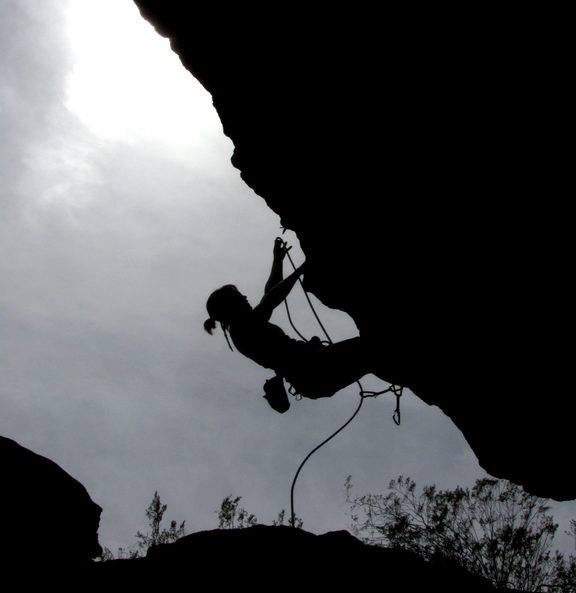 To build on the concept of success related to goal setting, I employed the concept of successive approximation. This concept has been used in therapeutic settings to help individuals overcome phobias that hold them back in their normal day-to-day lives. For me, I would use it to slowly tick away at my fear of falling. I realized I had certain “triggers” when climbing that led to a fear response, so I start by identifying my triggers and then set my smart goals for each climb to address one of these triggers.

(Piedra Parada is the best climbing destination, check it out!)

Some of my triggers include: traversing away from the bolt line, getting in and out of huecos, run-outs, less steep terrain, and bad clipping stances. Upon arrival back in the Red, I quickly had many small successes in overcoming one of these triggers per climb by setting a SMART goal to address a single trigger on each climb. I started feeling better about myself, and my climbing. The next step was to climb routes with multiple triggers present, tackling a series of goals in a single route.

By parsing the routes into chunks I could focus on my specific goals and overcome them one at a time. Then on the sections of the climb between the triggers, I found myself flowing through the movement and enjoying the climbing even more. 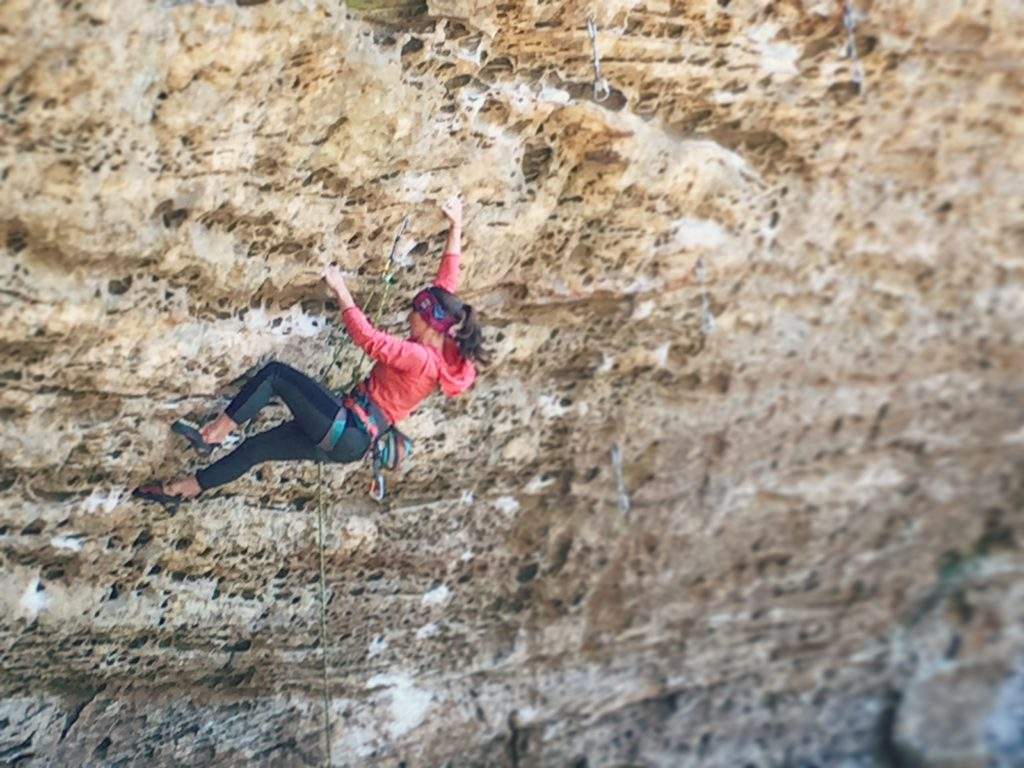 More climbing and conquering fear in the Red. Photo by Beth May

One of the most important things to overcome for me was the fear of falling. The only way to do this was to fall. So many of my goals were specific to fall. An example includes: “I am going to climb until I fall; No saying take!” I also did not top-rope a single route after returning to the Red. If I was not willing to lead it, I was not moving forward or putting in the work necessary to overcome my fear.

Finally, if I was starting to climb poorly because I was afraid of the fall, then I would take the fall, period. The more I repeatedly taught my body that falling was okay in different situations, the less power the fear of falling had over me. If I was scared of what a fall would be like from way off to the side of the bolt line, I would climb way out there and let go.

If I had to climb past a bolt before I could clip, resulting in a big fall if I screwed it up, I would test out the fall. Then the next time I went up, the uncertainty of a particular fall and the resulting scariness, were no longer issues.

One thing I realized as I started to become more comfortable with falling, was that taking a controlled fall became my new “Take!”, meaning that I would just let go from a place that I felt okay about falling rather than continuing to try hard and climb into a place that I was less certain of falling from. So I had to incorporate breaking this new habit into my goals and intentions on climbs. The new goal would be, “I am not letting go or saying take. If I fall it’s going to be while really going for it!” 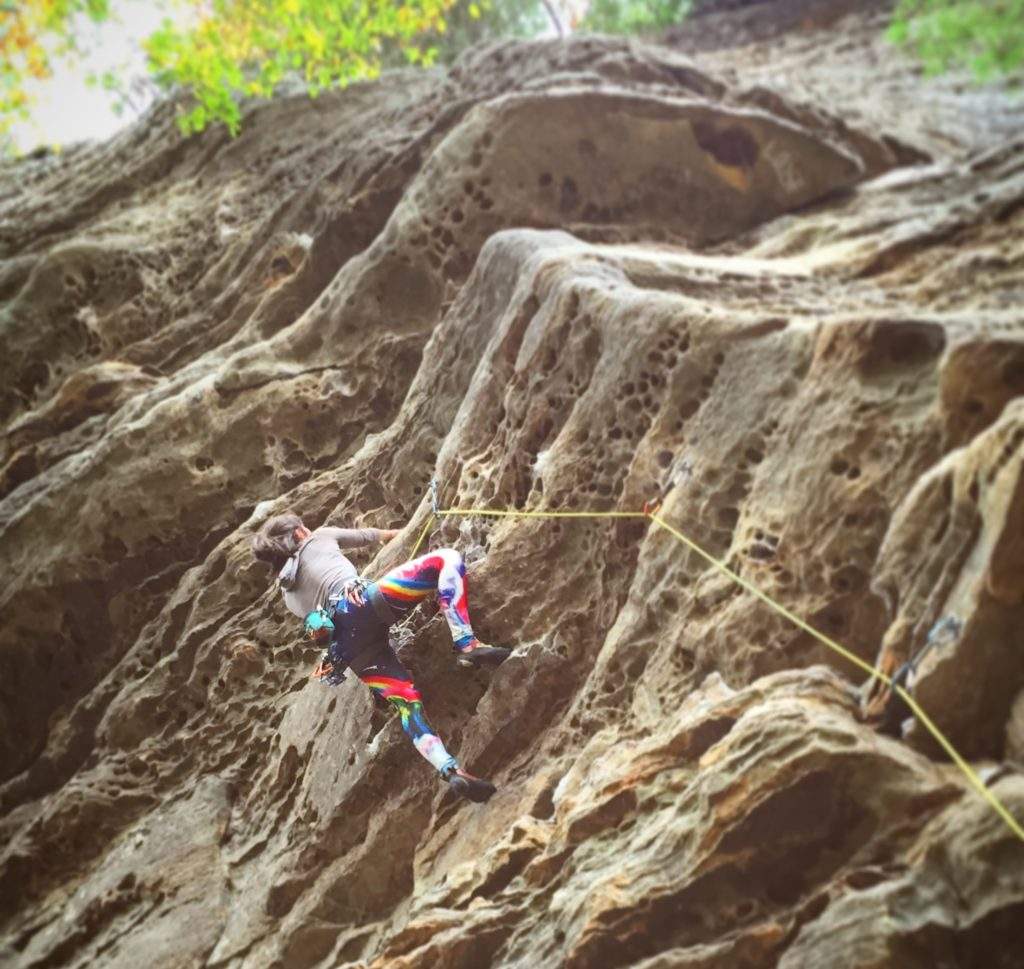 At the beginning of my breakthrough (the pants probably helped) on Captain Blondie Sinks the Ship 5.11b.

The final tool in my fear conquering toolbox has to do with all that defeating self talk. I noticed that I had a bad habit of looking up at a climb and identifying the things about it that I found scary, and then talking myself out of my ability to do it based on that script. In my head I would say things like, “Oh I don’t think I am going to like that run-out between the fifth and sixth bolt”, or, “Wow, that section looks blank!”

One of the things I needed to be more intentional about was what I told myself, both before and during the climb. So I began to catch myself in those thoughts and force myself to switch it up. Instead I would make myself identify parts of the climb that looked particularly fun, or interesting, or even specific holds that I was excited about grabbing, creating a positive relationship with the climb before I even started climbing. The things we tell ourselves both before engaging in climbing, as well as during, have incredible power over our ability to perform.

I have learned to tell myself supportive, encouraging things and look for the parts of the climb that I am excited about rather than the parts I dread.

Putting it All Together, Your Way

Many of these concepts are not new. It’s a hodge-podge of things people have said or tried before with a few ideas that were new to me combined with my process of self-discovery. I think that even if I had read all of these exact steps in an article, it may not have worked as well as having to struggle with my own process and figure out what worked for me. Every person is going to have a slightly different relationship with their fear, and therefore, a slightly different strategy for working through it.

I can’t express what a relief it has been to discover a method that works for me. I feel liberated. I feel free from the captivity of my own mind. I am having so much more fun rock climbing than I ever have before. I can’t wait until the next time I get to go climbing. It’s like falling in love with the sport all over again. It feels incredibly rewarding to try really hard, and to know that if I fail, I fail giving it everything that I have.