Today we talk to the brains (and the beauty) behind The Heist, Brittany Marryott and Andrea Brennen.  If you haven’t heard, The Heist is going to be the first all female competition where all the elements, from the route setters, to the forerunners, to the DJ, and emcee, will be run by 100% women.  That’s right, the ladies are taking over Central Rock Gym, for a whole weekend of not only the bouldering comp, but female-oriented climbing clinics as well!  This is a big deal for women in climbing, and Brittany and Andrea were kind enough to take some time to talk to us about how this competition came about and give us a sneak peek behind the scenes.

We have an extensive guide to the newbie climbing training with useful tips, check out! 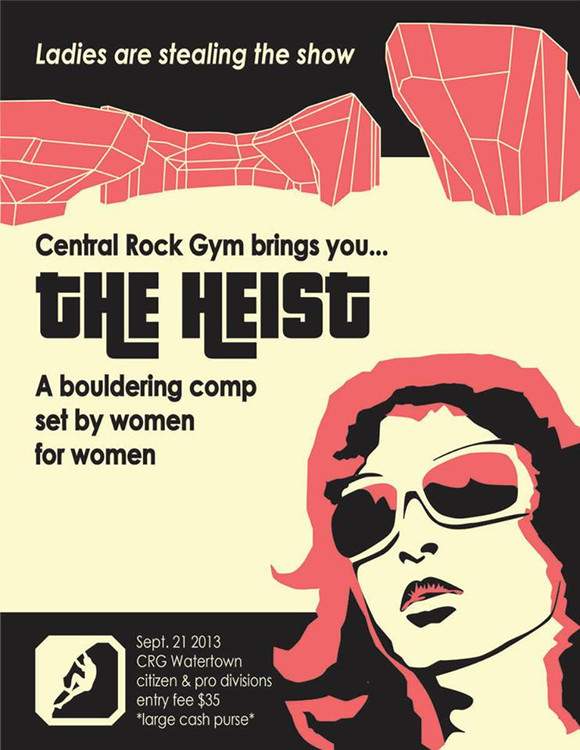 Just to give you an idea of their qualifications, Brittany was Office Manager and Director of Event Logistics at NE2C, working with Jason Danforth and Pete Ward to run events like the Eastern Mountain Sports Nor’easter and the Unified Bouldering Championships Pro Tour. Andrea’s been involved with multiple high profile events in the climbing industry, setting and forerunning for MetroRock’s Dark Horse Championship and running real-time scoring at ABS Nationals (using a scoreboard system she developed with STNCL-co-founder Chris Brown).  So let’s just say this comp is in some very capable (and chalky) hands. Here’s what they had to say about the ladies stealing the show: 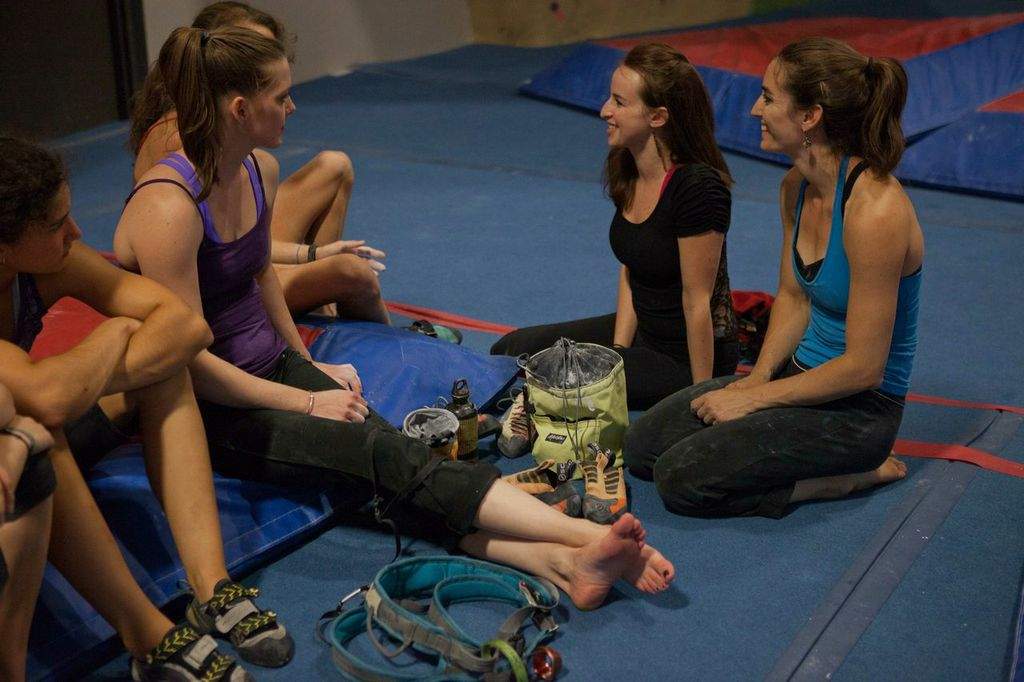 Britt and Andrea (on the right) chatting it up with some of The Heist competitors.

CXC: First off, what drew you to the idea of putting together an all female comp?

Britt: I was immediately drawn to the project because of the originality of it. I have worked on a lot of competitions but this is the first one that would give me the freedom to really design it from the beginning. The concept of empowering girls in the industry is such an obviously needed avenue that inspiration and support surrounding the event came quickly.

Andrea:  Personally, I’m just psyched to create an event that celebrates women in the sport. Even though more and more women are getting into climbing, the industry is still pretty male-dominated. A majority of first ascents are established by guys, and a lot of climbing media gives more coverage to male athletes, but I really think things are starting to change. Women like Sasha DiGiulian and Daila Ojeda are showing us that pushing the boundaries of the sport isn’t just about hunting down FFA’s [first female ascents] of male-established routes, it’s about celebrating the fact that women climb differently than men and having the confidence to explore what’s possible.

CXC: What makes an all-female comp different (aside from no dudes)?

Britt: I think the atmosphere will be a little more collaborative. I am hoping to get a lot more first time competitors involved and I want the atmosphere to be a supportive one to help encourage each other.

Andrea: For me, the experience of climbing with women is a lot different from climbing with guys…when I see a female climber crush a move, even if she’s way stronger than I am, it somehow makes the move seem possible. When someone with a similar body type can do a move, I can’t make as many excuses; I can’t give up because I tell myself it’s “too reachy” or “too burly”…I know I just have to try harder. And for me, that’s really motivating.

I hope that at The Heist we can create an environment where this kind of supportive motivation plays out at a big scale. I can’t wait to see what the vibe is like during the event — I’ve never been in a situation where so many ladies will be crushing together without any guys! 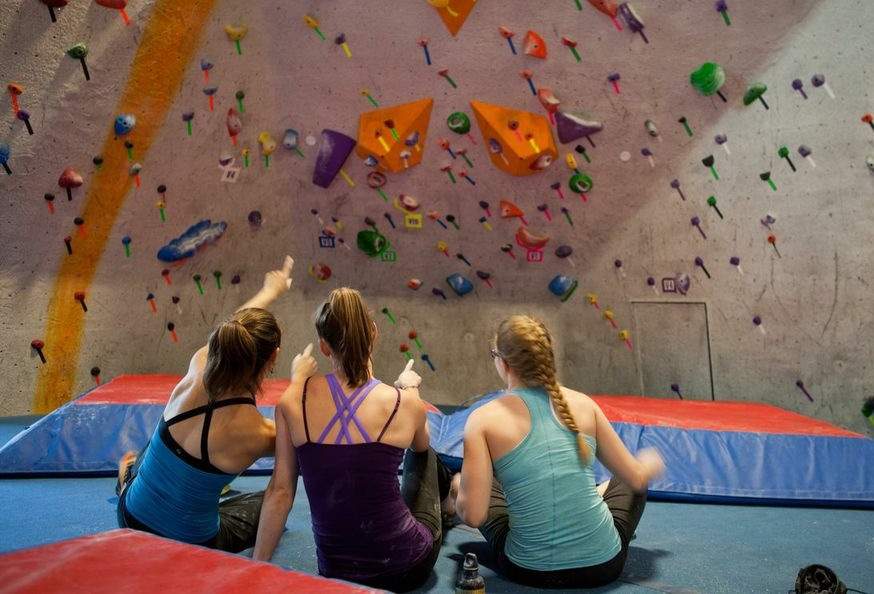 CXC: What were some of the challenges to creating an all female-run comp that you’ve encountered so far, and how did you deal with those?

Britt & Andrea: We definitely had to do a bit of networking to find the right people. We both have great contacts in the industry but the majority of them were men, so we found ourselves searching a bit more than normal for females that could do the same job. It was a perfect example of why this event is so important.

CXC: How have men responded to the comp so far?

Britt: Most men I have talked to about it have been psyched at the idea, but a bit jealous that they can’t compete.

Andrea: I’ve had the same experience so far; guys have been incredibly supportive! I’ve been surprised, actually, at how many guys keep telling me that they are psyched to come to The Heist to hang out, watch, and support the event. I think a lot of guys see that the dynamic can be quite different when women climb with other women and that this can really help their friends, girlfriends, sisters, etc. climb harder, be more confident, and have more fun.

CXC: What makes a good comp vs. a so-so comp?

Britt: A successful comp usually comes down to the personality of the event. The routes need to be fun and the event needs to be well organized and entertaining. Obviously crazy lights and music bring the production value of an event up, but the key is the experience. All the money in the world won’t help if the athletes and spectators don’t have fun.

Andrea: In addition to the personality and the vibe, I think the route setting is really critical. In the redpoint qualifying round, there has to be a good variety of styles and grades and the problems have to be really fun! And finals has to be set in a way that challenges and separates the field of competitors, but is also inspiring and entertaining for the audience to watch. 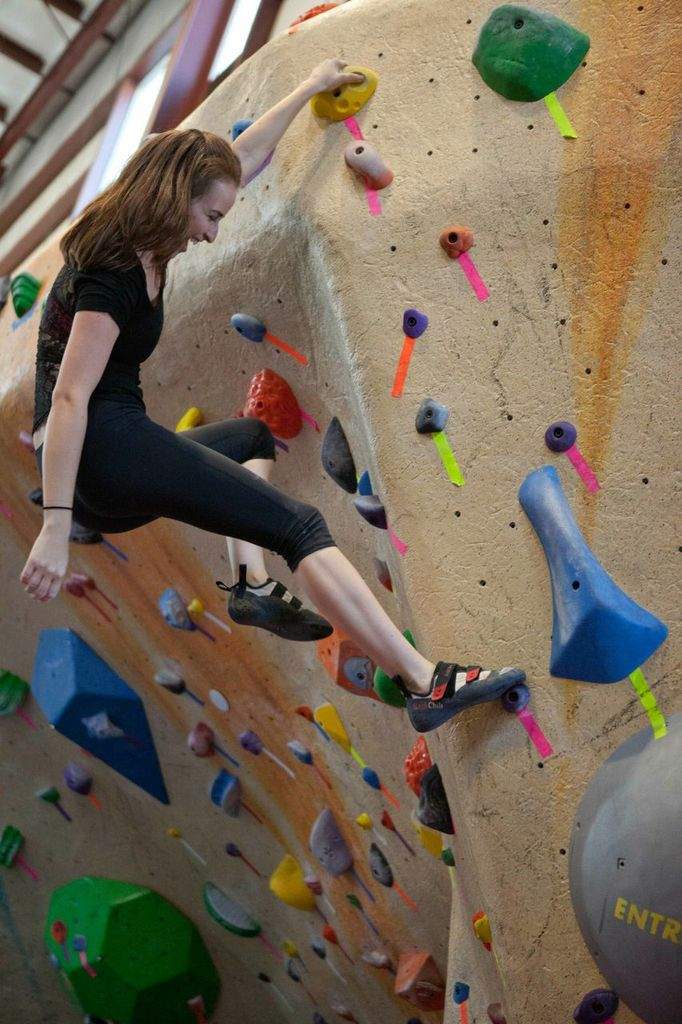 Britt showing us how to have fun on a climb.

CXC: We just saw the PsicoBloc comp, in which the objective was, in some ways, to push the boundaries in climbing. Do you see The Heist as pushing the boundaries of climbing?

Andrea: We also want The Heist to push boundaries in the climbing industry — I hope that we can help to change people’s expectations and assumptions about how the industry is run, to show that female setters can hang with their male peers, for example.

CXC: What are you most excited about for the day of the comp?

Britt & Andrea: At this point, I think we’re most excited just to see this project come to fruition! It’s been a lot of brainstorming and planning and work and we’re so psyched to see it all come together. Finals is gonna have a really interesting twist and it will be fascinating to watch how the girls deal with that. Also, the day after the comp will be filled with female-oriented clinics covering a range of topics like climbing technique, setting, and nutrition that we think people are going to enjoy.

CXC: Who can we expect to see there?

Britt & Andrea: We have a lot of local talent gearing up to compete and some big names are coming in for the Pro division. Meagan Martin, Sasha DiGiulian, Tiffany Hensley, Lizzie Asher, Katie Peters, and Francesca Metcalf are all coming to climb. And we’re bringing in Kasia Pietras as head setter.

We want to thank Brittany and Andrea for taking the time to talk with us.  We’d also like to thank Central Rock Gym for championing this event from day one. Their new gym in Watertown, MA is a great space with tons of awesome terrain that will make an impressive home for an event like The Heist, which is going down on September 21st.  Check out The Heist’s official website for more information, and on-going updates, and you can like them on Facebook too! If this post got you psyched to register, go to Central Rock Gym’s website to sign up today!