Let’s talk about the truth of rest days. Today’s post comes from Galina Parfenov, who recently launched her own training site, Parfenov training. Her site focuses on online training programs, private coaching, and training posts. If you’ve ever watched any of Galina’s Training for Climbing Youtube videos, you know she takes climbing and training seriously. Keeping that in mind, when Galina tells you that rest days are important, you should listen.

In the time I have been coaching climbers, I have discovered one common link: all of my clients hate rest days. The truth of the matter is, I hate them too. You can’t climb, you can’t throw weights around, and you can’t cardio too much…essentially all you can do is go to work and school, eat, and sleep. Yup, rest days are the worst.

ANY training program can be described by Han Selye’s General Adaptation Syndrome, or GAS for short. The GAS model describes the body’s response to stress in three stages: alarm, resistance, and exhaustion. The first alarm stage, more commonly referred to as the “fight or flight” response, describes the immediate hormonal disruption to the body’s normal, homeostatic state. For instance, a fight or flight response is triggered during and immediately following a 20-minute campus board session. Among other catabolic hormones, cortisol and adrenaline will be released, causing the breakdown of muscle tissue and the depletion of the body’s energy stores.

Wait a minute? Breakdown of muscle tissue? Sounds pretty bad. Fear not, the breakdown of tissue is actually a good thing and allows us to rebuild bigger and stronger muscles, IF WE TAKE ENOUGH REST.

The second resistance stage, otherwise known as the adaptation stage, occurs DURING RECOVERY. When you continue to expose yourself to a certain stressor, say campusing once a week, the body adapts at the cellular level to better be able to cope with that stress, which is why next time the same workout will feel just a tad easier. More specifically, the micro-tears that were formed in the muscle tissue during the alarm stage are repaired and energy stores restocked.

The third exhaustion stage occurs when there is too much stress and NOT ENOUGH REST, and the result is injury, minimal gains, and something we call overtraining. Using our campus board example, this would happen if the climber was campusing three days in-a-row, each week. Actually, this would happen even if they were campusing one day and climbing the other two days. Either way, they are not giving their body nearly enough time to repair damaged muscle tissue. In other words, they just did twice the work for half the gains. If only they’d known the truth about rest days.

What if I told you that theoretical climber was me, just a year ago? Always on the campus rungs, every other day for up to two hours, climbing 80-90% effort on the “rest days”. Shockingly, I saw almost no progress during that phase and was constantly in a state of fatigue and exhaustion. If only someone had told me the truth about rest days.

Well, learn from my mistakes, and let me tell you the truth about rest days.

#1: This Is The Definition Of A Rest Days

As assigned to my clients on Addaero: 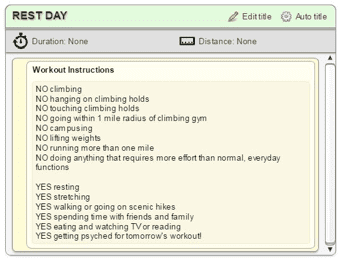 #2: There Is Such A Thing As Active Recovery

Active recovery refers to low-intensity exercise done immediately after or in the days following the workout and has been shown to improve the rate of recovery, which is why I’ve included walking and hiking in the Workout Instructions. This also means that, in theory, you can climb relatively easy problems the day after your campus workout. However, knowing you are a climber and unlikely to succumb to climbing below your limit, I have excluded this option from the list. Likewise, even though we can repair muscle tears we cannot heal our skin, even on easier climbs. Such is the nature of the sport.

No matter how hard you work and how much you rest, you just won’t get the results you’re looking for if you don’t fuel your body properly. As a general guideline, you want to consume protein and a fast-digesting carbohydrate about an hour before and after your workouts, in about a 2:1 carb-to-protein ratio (carbs are essential in replenishing energy stores and getting the protein to your muscles faster). Fast-digesting carbs include potatoes, white rice, white bread, bananas, and almost anything with low fiber content.

No, carbs aren’t bad, and yes, for workouts, fast carbs are better than their whole-grain counterparts, as they are metabolized faster. As an example, I usually have a banana protein shake before a strength workout and chicken or steak and white rice afterward. 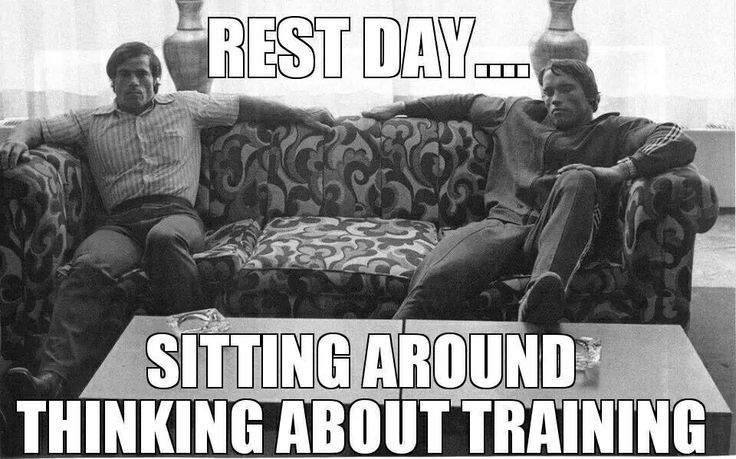 #4: Amount Of Rest Is Directly Proportional To The Intensity Of The Workout

The harder the workout, the longer the rest period should be. In general, the rest period will range anywhere from 24 to 72 hours, and for most things, two days should suffice.

You hate it, I hate it, all climbers hate it. But there’s just no way around it if your goal is to get stronger. You can’t cheat the system and magically trick your body into recovering instantly. What I found when I started taking more rest days was that I started to appreciate and look forward to the training sessions a lot more. I also began to see progress again and had more time for other things, like school, family, and friends. After all, strength gains are made on rest days, not training days.