All Women Big Wall Ascents: There’s top-rope climbing, there’s sport climbing, there’s traditional climbing, and then there’s big wall climbing. For any newbies out there, big wall climbing is what it implies – climbing up a really big wall, think the 2,000-foot face of Half Dome. It involves multiple pitches of climbing, so sustained that it usually takes multiple days. (Yes, that means you’re sleeping and sh!*@ing 1000 feet up in the air). Unless you’re uber hardcore and place gear, climb, build anchors, rappel, and clean all on your own, big wall climbing involves a team – someone leading and someone cleaning.

In 1973, Bev Johnson and Sibylle Hetchel etched their names in climbing history, as the first all-female team to climb the Triple Direct route of El Capitan. In 1971, at the age of 24, Beverly Johnson was already an established member of the Camp 4 community in Yosemite. She had also already also won over the hearts of the Camp 4 climbers and earned the nickname, “Big Wall Bev”, as the first woman to solo climb the Dihedral wall of El Capitan over a period of 10 days in October 1978. (See note above about being uber hardcore).

Lynn Hill, who would later become the first PERSON to free The Nose, credits Bev as a mentor and a friend. You get a glimpse into the mindset required to climb a big wall in the letter Bev wrote a few days later: 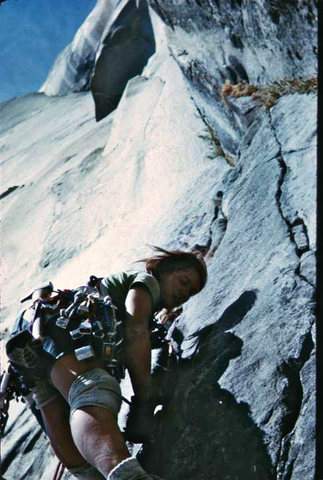 We had an amazing interview with Flannery Shay-Nemirow, check out here!!!

I was still fairly strung out from the Triple Direct which I had finished five days before.   My mind was still boggled and my wounds still open–an incredible set of blisters from my boots, chunk of meat still missing from my hands, my back raw from my waist loop.  I couldn’t believe I was going back up.  Extended climbs are at least as punishing mentally.  Can’t relax.  Seven days of trusting life to flimsy gadgets and fragile ropes.  Got to stay alert.  No mistakes–ran out of food and water and had to sprint from the summit, climbing most of the final night by headlamp and moonlight.

Walk out eight miles the next morning.  Very tired but glad to be released from the clutches of El Capitan at last.  Walking through the forest along the rim.  The forest and the wall seem surreal by turns.  It is impossible to hold them in the mind together.  Ethereal forest.  Cool, autumn shade for parched throat.  Slender, white aspen with yellow leaves, gold grasses, and dark conifers.  Down a thousand switchbacks, feet protesting.  Endless switchbacks.  Finally Camp 4, home free. 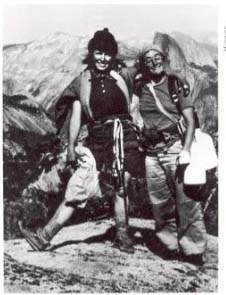 A few years later in 1977, Molly Higgins and Barb Eastman completed the first  all-women ascent of the Nose. Molly Higgins had recently joined the Camp 4 community in Yosemite, after surviving a devastating alpine expedition in the Soviet Pamirs. Higgins was the only female member of the US Pamirs expedition team that comprised some of the best American climbers of the day. During the expedition, an avalanche claimed the lives of eight female Soviet climbers and one of the American team members.

This story would later be told in the book and film, Storm & Sorrow in the High Pamirs. Higgins recounts finishing her first big wall in Yosemite with Barb during the summer of 1976 and setting a goal to come back the following summer to complete The Nose. While Eastman expressed some incredulous hesitation that the two of them could do it, they trained throughout the following year with dedication and persistence, and came back the following summer to claim the title of the first all-women ascent of The Nose.  You can see their joy and pride in the picture above.

Flash forward to today, where women continue to push and inspire, on the same granite Yosemite cliffs that Bev, Sibylle, Barb & Molly made history. In June 2010, Kate Rutherford and Madaleine Sorkin spent five days climbing The Freerider (VI 5.12+, A1), a 3,000ft. route on the Southwest face of El Capitan. More recently, the team traveled south to Patagonia, to send Mate Poro, the north face of Fitz Roy (VI, 5.10, A1). Bev Johnson claimed she approached climbing a big wall in the same way that one might approach eating an elephant, one bite at a time.

Kate and Madaleine offered the same advice, “there is a lot of climbing up there, take it one pitch at a time, or looking up will make you want to puke.” 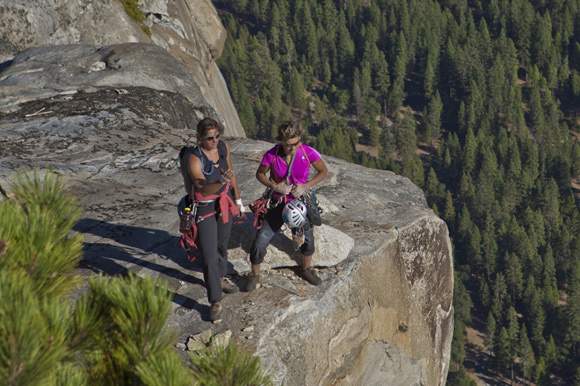 Marking their own place in Yosemite history in September 2012, Mayan Smith-Gobat and Chantel Astorga set the record for the Fastest Female Ascent of El Cap, climbing it in 7:26, shattering the previous record of 12:15. As if that weren’t enough, the pair then proceeded to skip on over and climb Half Dome, becoming the first all-female team to link-up both walls in less than 24 hours. (Smith-Gobat simultaneously claimed the title as the first Kiwi to climb El Cap.)

Mayan knew that women could climb faster than the record showed and was motivated by her fellow female climbers, “I first started thinking about doing it when the women’s record was 12 hours, basically because I felt that this was almost an embarrassment to us.

Then two good friends of mine brought the record down to 10 hours and 40 minutes [Libby Sauter and Chantel Astorga]. Half a year later a couple other women joined the game and broke their record by 20 minutes [Jes Meiris and Quinn Brett]. The race had begun… I knew that I could still break this record without investing too much time into it. So, I decided to and in the process I realised that it is actually a really fun way to climb big walls!” A few days later, Gobat would climb The Nose with Sean Leary in 4:29.

And that’s your very brief history lesson of all women big wall ascents! Now it’s recess time, so grab your girlfriends, get out there and climb on! ~Cate