Every year the International Federation of Sport Climbing (IFSC) hosts a series of competitions in each discipline of climbing: bouldering, sport, and speed. This year the climbing World Cup series has come and gone, and now the sport climbing World Cup series is underway. Did you even notice? Okay, maybe you noticed, but how many comps did you watch? How many did you care about? For most of us, at least Americans, the answer sounds something like “Not many”, “Zero”, or “Huh? You mean that Euro comp?” 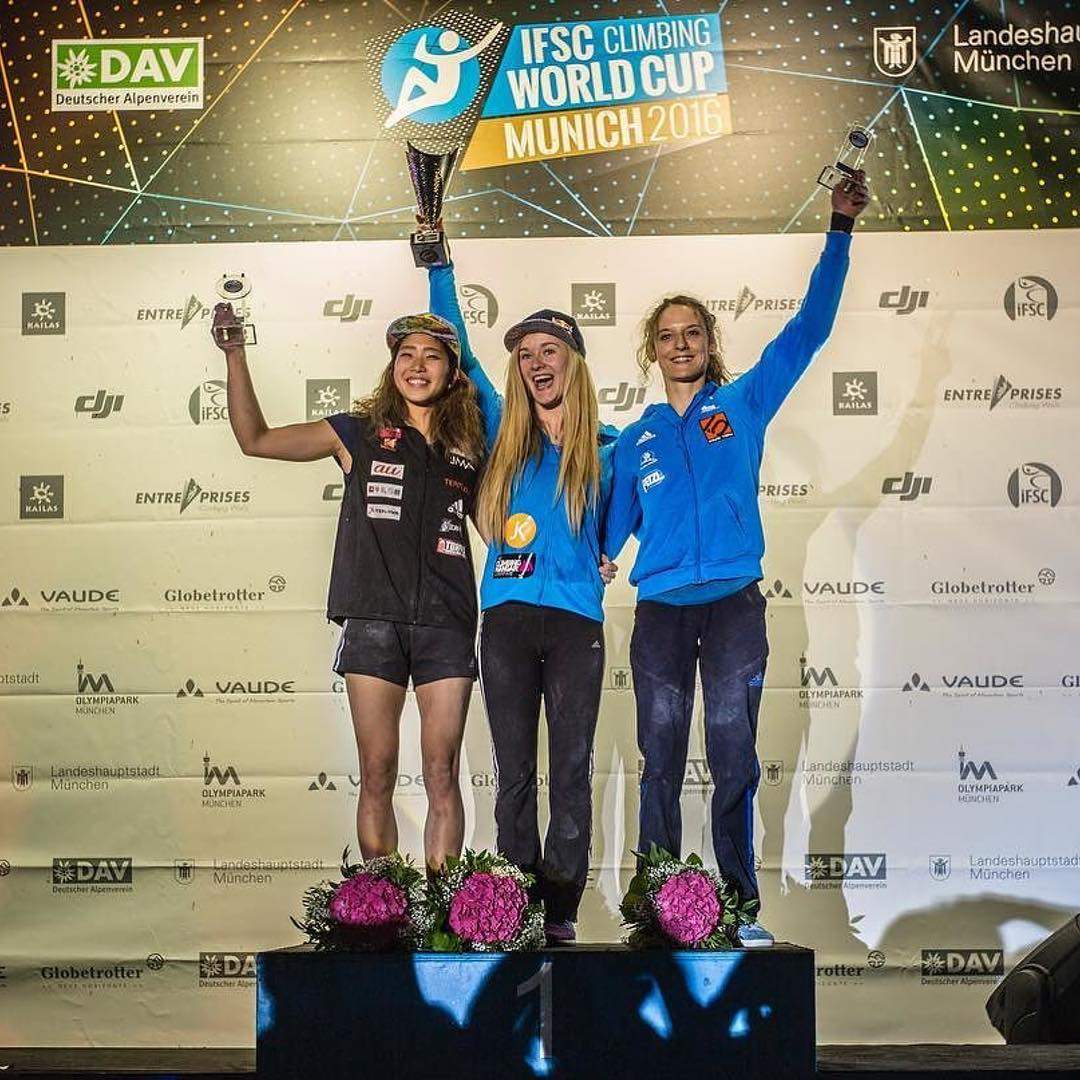 The 2016 Overall World Cup bouldering podium: Shauna Coxsey of Great Britain, Miho Nonaka of Japan, and Melissa Le Neve of France. Photo by Liam Lonsdale via Shauna’s IG. We have another amazing post here, don’t forget to check it out!

Having covered each Bouldering World Cup competition this season on Crux Crush, we also noticed that very few of you read, commented on, or shared these posts. I’m not calling you out here, I’m just saying that we, as Americans, don’t seem to care.

There are really two sides of the not-caring-equation: the competitors and the spectators. Each side isn’t getting into it for different, but related reasons. To dig into the issues surrounding the World Cup we caught up with a bunch of American climbers who have competed in the series, including Megan Mascarenas, Margo Hayes, Ben Hanna, Sierra Blair-Coyle, Michaela Kiersch, and Josh Larson. Here’s what we found out.

In order to have a chance of winning the bouldering or sport climbing World Cup series climbers must compete in at least 5 of the 6+ comps, and each comp takes place in a different location around the world. So it’s no surprise that almost all the climbers we talked to brought up the cost; not only financially but also physically and emotionally. 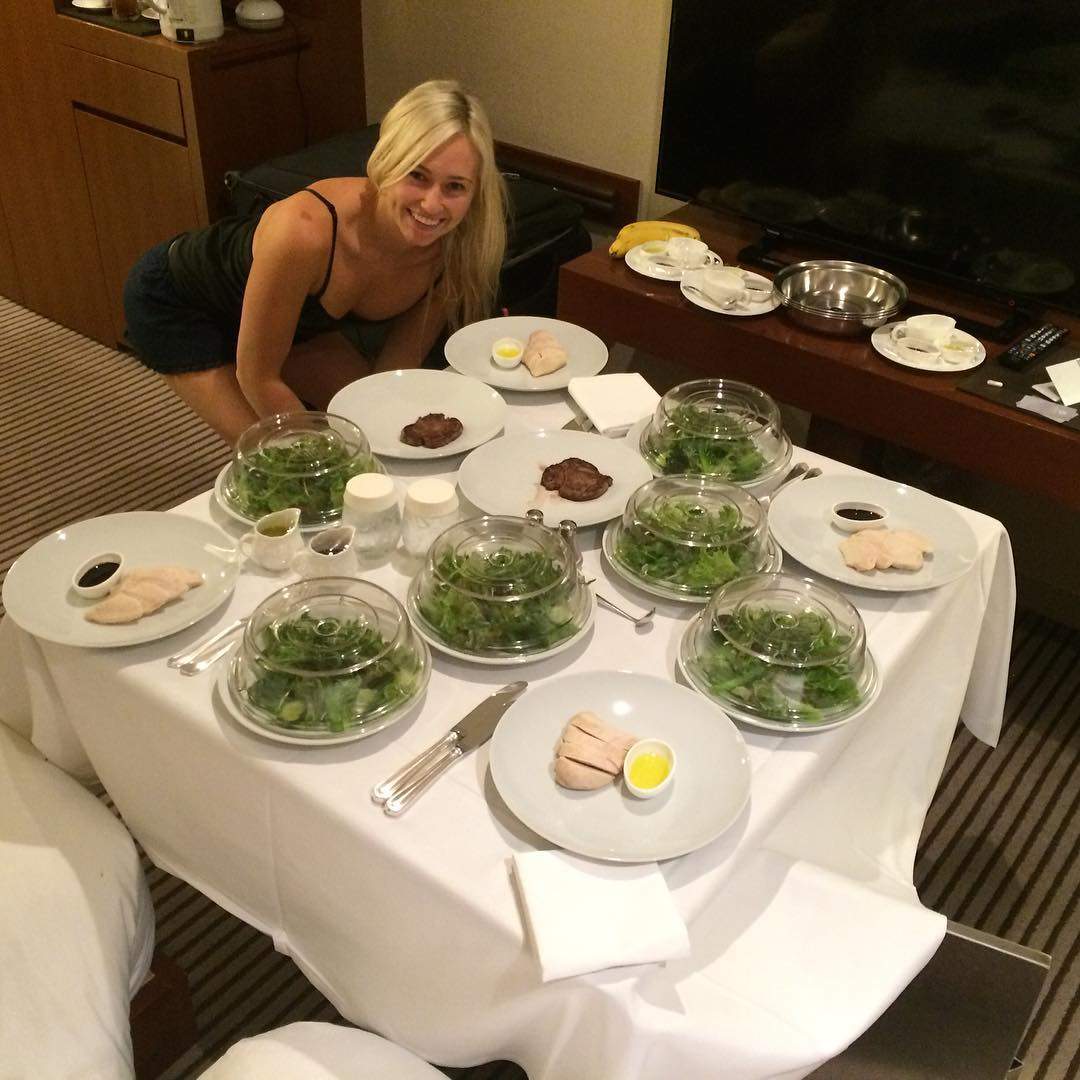 Sierra making the most of room service while in Tokyo for a WC comp. Photo via Sierra’s IG.

The average person is lucky if they get to travel internationally once or twice a year. The idea of doing it 5 or 6 times is pretty ludicrous. At just 18 years old, Margo Hayes already gets it, “The primary issue is financial. It is extremely expensive to travel to the competitions, and it really adds up if you compete in the entire circuit.”

Complicating the financial issue further is the fact that, unlike other countries, American climbers are not supported financially by a central governing body. While they may have sponsorship money, it is largely up to the individual climber to finance his/her own travel. Michaela Kiersch shares, “All US Team athletes support their own travel fees which add up very quickly while going between Europe, Asia, and the US. Other federations contribute to their athletes travel either partially or completely.”

In addition to finances, extensive travel can be taxing physically and emotionally. 14-time World Cup competitor Sierra Blair-Coyle tells us, “My least favorite part is the long travel it can take to get to some of the competitions. I am definitely better at traveling now, but jet lag can still kick my butt!” Let’s not forget that these climbers have to hop off a plane, in a different time zone, and then perform at the highest level with the best climbers in the world.

This might sound lame at first, but hear me out. What’s the point of investing tons of time, money, and energy into a comp series that you probably won’t win? Sure you get the experience of climbing on the world stage against amazing climbers, but tens of thousands of dollars and hundreds of travel hours? It just isn’t worth it for some climbers.

Competing with the best is an incredible honor, but it also ups the game in a major way. “I love how many strong people are there, it’s literally a competition of the best climbers in the world and I think that’s awesome for the challenge, the motivation, and the honor of being there,” says Ben Hanna. Ben ultimately sees the stiff competition as a positive thing, but we can’t ignore that it also greatly decreases your chances of winning. 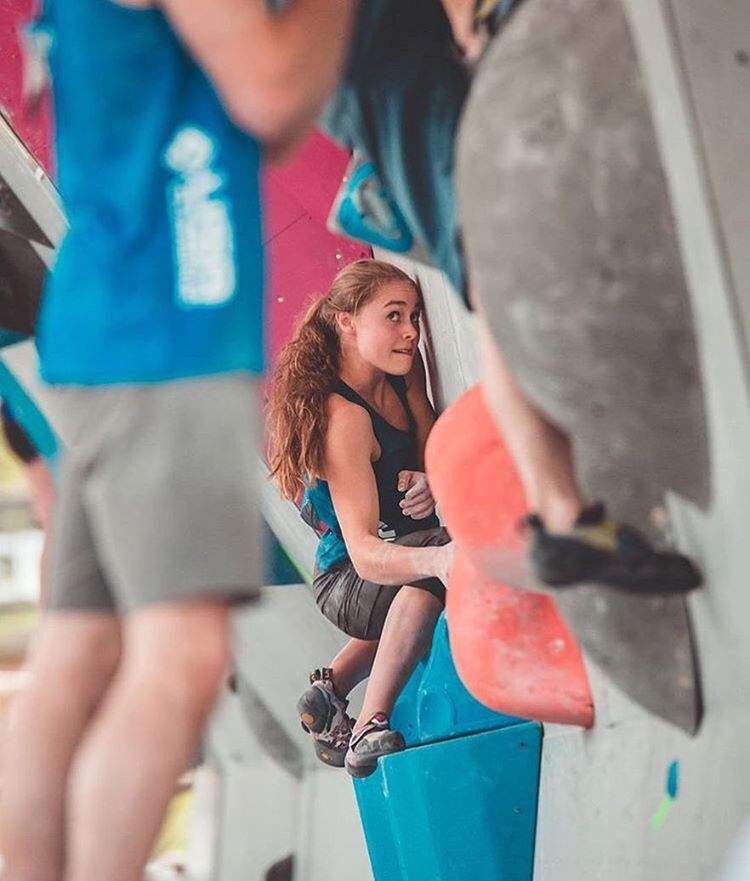 Another aspect working against American success is the type of climbs set at World Cup comps. While most climbers welcome the interesting comp-style setting, it can also be a daunting challenge. Ever-positive Sierra shares, “The setting at the WC level is always amazing. I have so much fun trying new problems. I am constantly learning on the World Cup circuit and that has been amazing!” Michaela Kiersch adds to this, “World Cups like Vail are expected to put on a show, and it takes a particular set of boulders to make that happen – it’s hard to prepare for the wacky things they throw out.”

For whatever reason, the American climbing community currently values outdoor ascents over success in competitions. Michaela makes this clear, saying that the World Cup “really does not advance the professional climbing careers of US athletes. The American climbing community is much more focused on outdoor accomplishments and US competition.” Time will tell if the next generation of climbers and the inclusion of climbing in the Olympics will shift our priorities, but this is fodder for another article altogether. 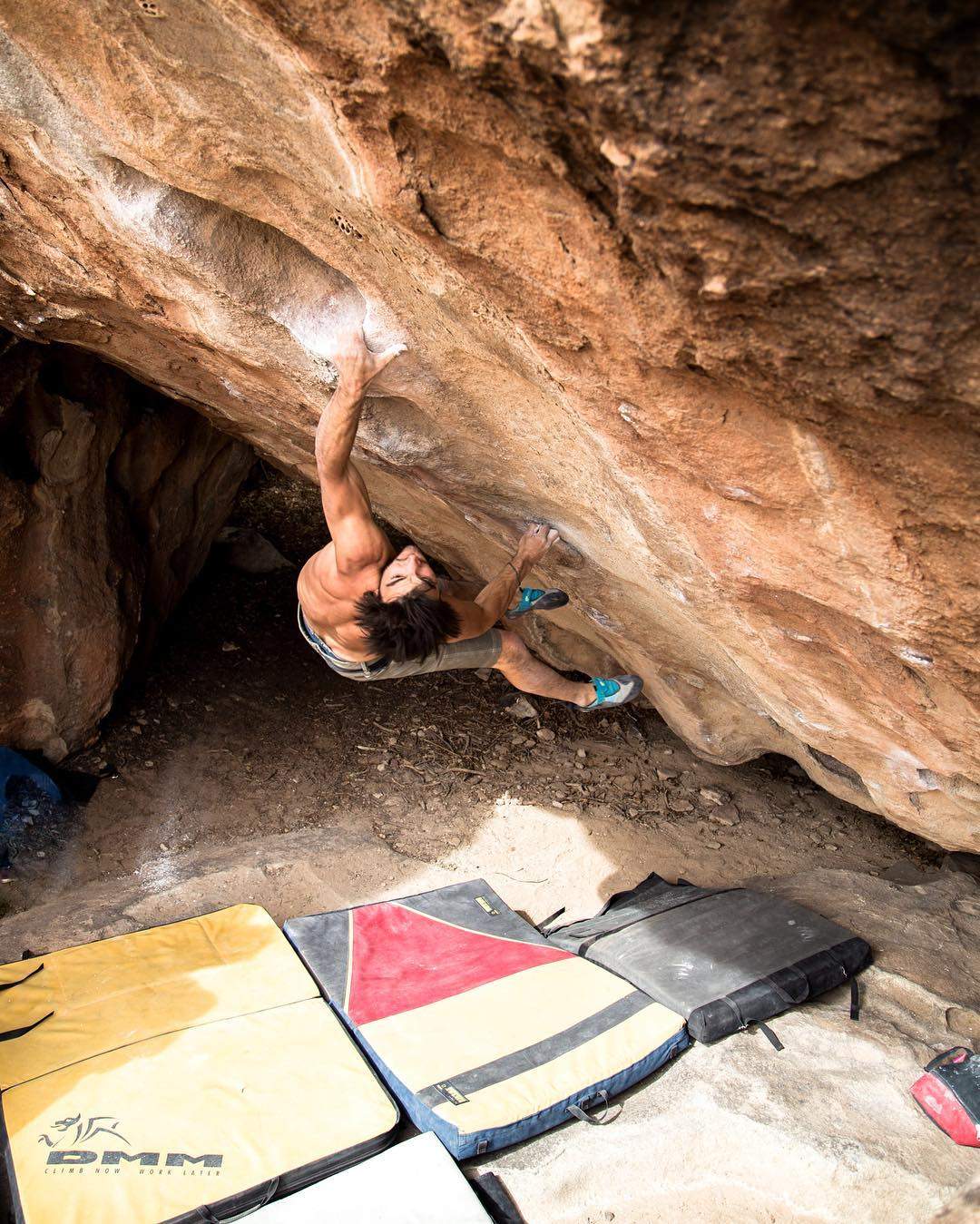 To further complicate the story of American values, Josh Larson adds that in the World Cup, “Bouldering isn’t all about climbing V15 or flashing V13, it’s about flashing V8’s on volumes or figuring out a weird sequence that is unknown to man. This different level can be overwhelming to our top athletes who don’t compete in it regularly.

It can also scare some away by not wanting to test their skills and not have the results they want or that the general public might think they should get.” So imagine you’re Daniel Woods or whatever top American climber crushing it outside – why would you want to go inside and get shut down on some low percentage moves on a funky, plastic V8? Yeah, I wouldn’t either.

Ben Hanna gets even more philosophical with us and comments on the state of mind and priorities of young Americans these days, “We put so much emphasis on the American dream, which is basically that you need to make a lot of money. And to make a lot of money you need to do well in high school, go to college, get a job, so on. A lot of the kids who could do well in the IFSC circuits are all at the point in their lives where they need to either go to college or commit to the IFSC circuit and they have all chosen the college path because that’s what’s important in America.”

Well I say damn The Man! Climb on! But in all seriousness, he does highlight that American climbing, unlike other major sports, doesn’t have the following and support to make competition climbing a viable financial option for young climbers.

Coming full circle with the points above, American spectators just don’t have many climbers to root for. Josh Larson simply points out that, “We don’t always have our strongest competitors at these World Cup events.” Michaela Kiersch adds that there is an emotional element lacking for spectators, “There are no American athletes to watch, no one that American spectators can follow whom they have a relationship with via media or otherwise.” 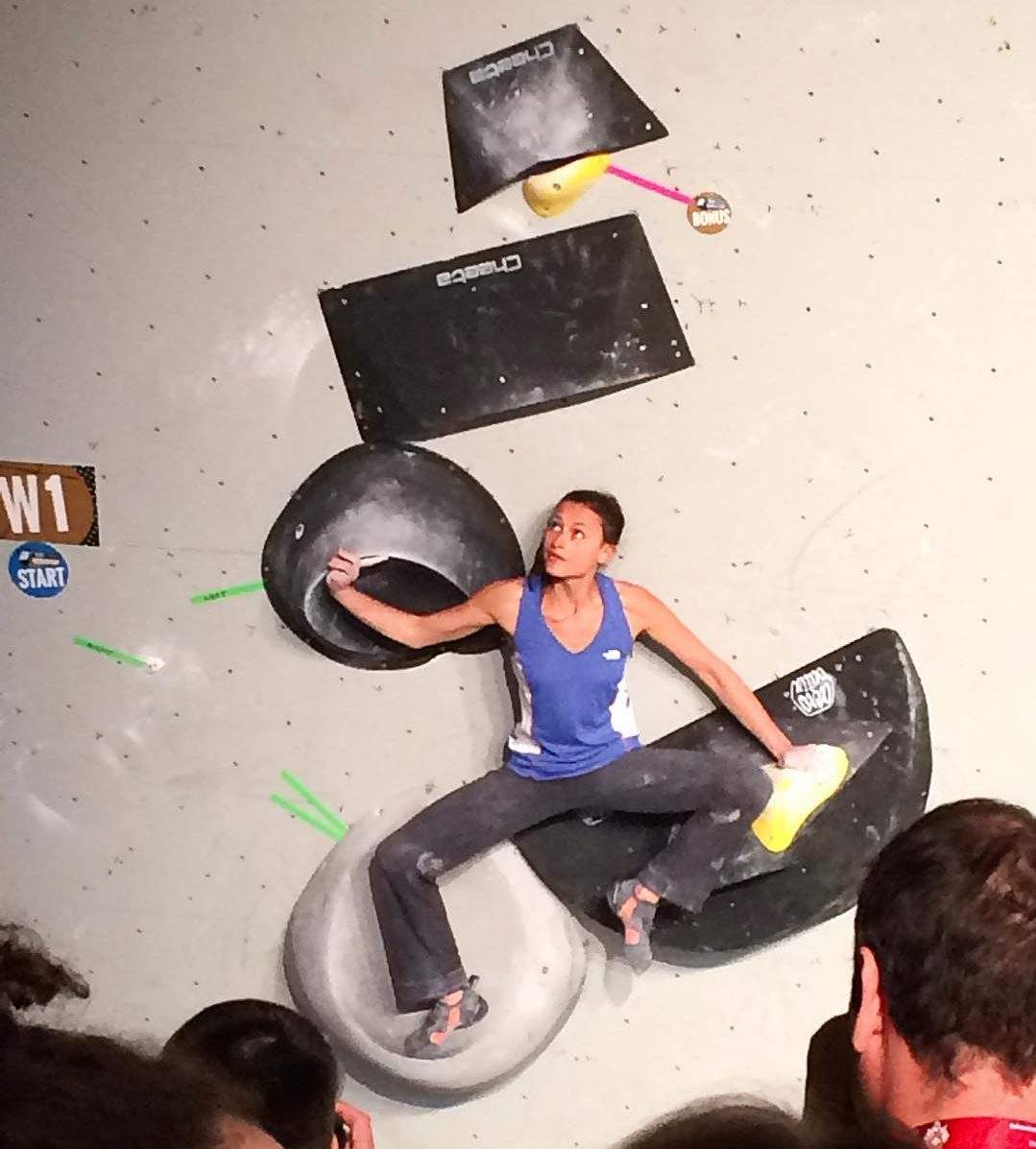 Megan Mascarenas is one of the few top US athletes competing in some of the WC comps. Here she is in Austria, where she took 3rd. Photo via Megan’s IG.

With approximately one World Cup event taking place in the US each year, there are very few opportunities for Americans to see these events in person. I imagine that if we had more opportunities to attend events we would become more attached to them and potentially follow them more thoroughly.

Even if we can’t see them in person, we can still watch the livestream, right? Not necessarily, Sierra explains, “When the competitions are happening overseas, the livestream often takes place in the middle of the night, which definitely decreases viewership.” So you’re pretty much out of luck, unless you want to stay up until 4AM to watch a sometimes spotty livestream.

The overall format of the World Cup series is hard to understand; believe me, I wrote a whole post trying to decipher it. Even the individual competitions can be difficult to follow. Megan Mascarenas, who has won 2 World Cup competitions says, “Bouldering WCs are mildly hard to understand or follow as a spectator. Even when I know exactly what’s going on, it can still be hard to decipher who is winning, or what a competitor needs to do in order to win.”

The Future of the World Cup

While the World Cup is definitely fighting an uphill battle with American competitors and spectators, many are hopeful that interest is growing. From the perspective of young guns like Megan Mascarenas, to veterans of the sport like Josh Larson, it looks like the next generation may have more interest in these events than their predecessors. “The events are very attractive to younger climbers and I feel that each year both the comps and the climbers are evolving and the competition side of the sport is growing!” says Megan.

Josh, who recently took the role of USA Adult Head Coach and Manager, adds, “I think this is the beginning of a new set of World Cup competitors! The kids these days are so fit and ready from being on elite teams and having almost an unlimited amount of competitions to choose from.” 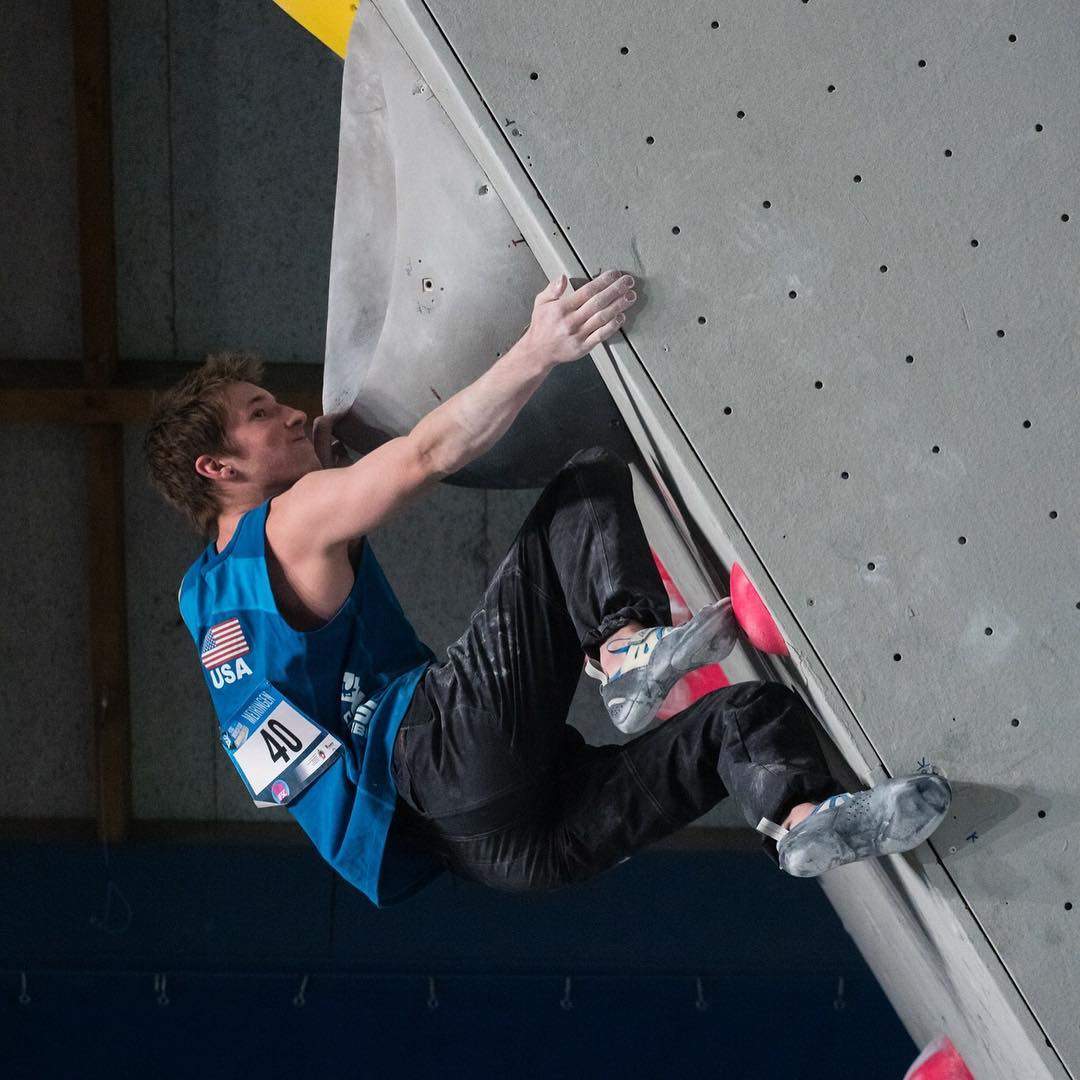 17-year-old Ben Hanna competing in his first WC comp in Switzerland. Photo by The Circuit Climbing via Ben’s IG.

The inclusion climbing in the 2020 Olympics may very well stimulate interest in the World Cup as well. Whatever the future of comp climbing holds, we’ll be here to see who’s climbing and who’s watching. In the meantime, thank you to all the climbers who shared their thoughts with us and best of luck in your upcoming endeavors, inside and out!