Deyo started her setting career in Seattle and quickly moved up the ranks to become head setter before being asked to interview for the position in Austin. In Texas, Deyo is one of only 2 female head setters at the 10+ commercial gyms in the state. While a setter is in charge of putting up new routes or boulders each week, the ahead setter is in charge of overseeing the work of all the setters in the gym and for Christine, this includes a whopping 250 boulders in the gym at any one time, with 2 new sets going up each week. 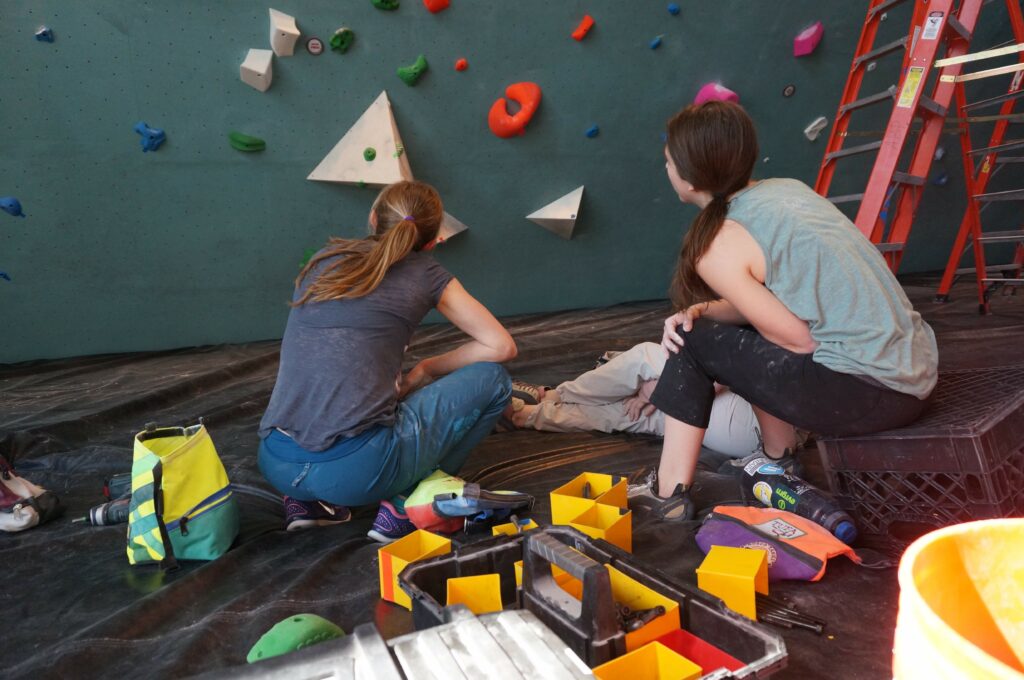 The Setters Of Austin Bouldering Project

While the setting community has historically been male-dominated, these days more and more women are joining the crew. At ABP Caitlin Kirshbom and Chelsea McLofland also round out the team of 6 full-time setters, a nice 50-50 ratio. I sat down to talk with Caitlin and Christine about their experiences. They have a lot of great insight into the plight of the female route-setter and a pretty refreshing viewpoint on gender dynamics in the community, plus some good advice for any setter–no matter your gender.

CXC: How did you first get introduced to route setting?

CD: I started setting up when Seattle Bouldering Project opened up in 2011. I had never set before, but they were looking for a strong female to add to the crew and asked if I was interested. I guess I wasn’t the only one that they offered this to, but I think I was the only one who really pushed the Head Setter at the time to follow through. I came in to forerun the opening set and then got myself trained up and put on the schedule for the first set.

CK: I started setting in 2010 when I began working at a climbing gym for the first time. I was a freshman at LSU trying to get a job at the REC center in hopes of making friends in an active/healthy lifestyle. As I was walking around the REC center getting my bearings I was drawn to a racket ball court that was being used as a climbing gym; they were playing really loud awesome music and the staff was eating pizza. Intrigued by this apparently anti-sport I applied to the rock wall and got the gig! 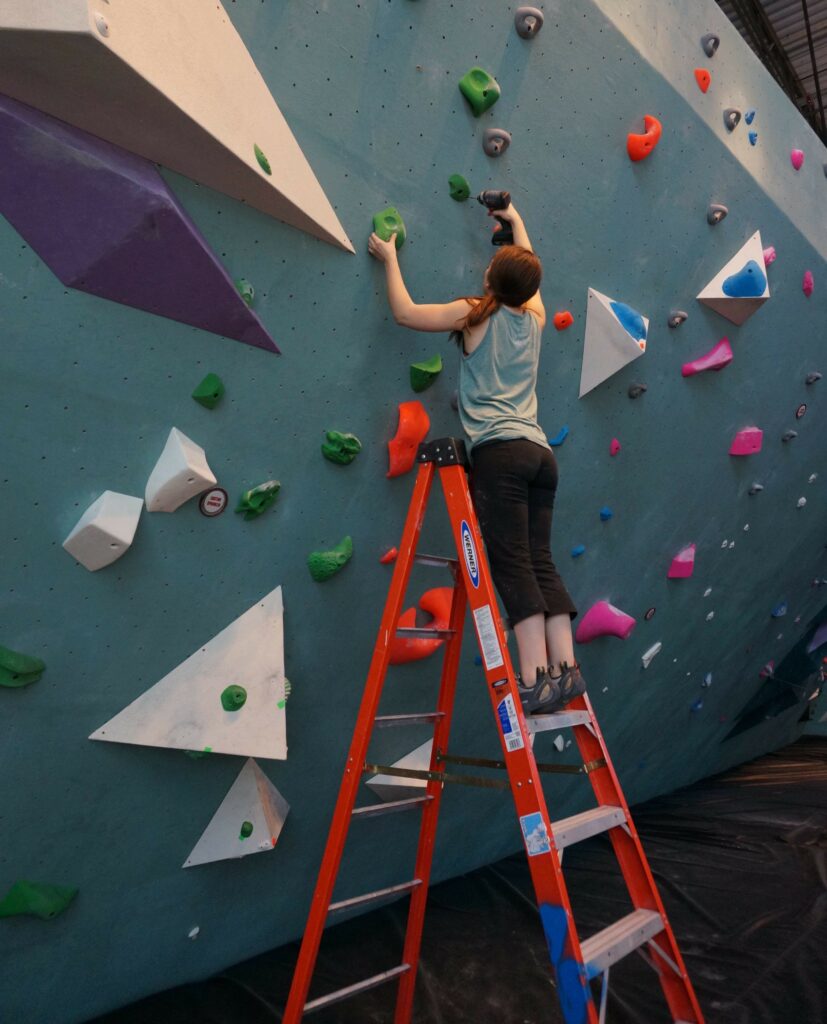 CXC: What drew you to set?

CD:  I think initially I just wanted to be one of the cool kids in that roped-off section of the gym. But I think it was the challenge of trying to constantly come up with new and interesting boulders that kept me in the game. That, and I feel I am always learning new things. I like where the setting has taken me, and I am very excited about where I think I can go with it in the future.

CXC: Christine, I know that you are really passionate about teaching your setting crew about movement and technique. Can you describe the process you go through to train your setters?

CD: I think that no two setters progress in their learning in the same way. Because they are experienced climbers already before starting to set, they each will have a different background of strengths and weaknesses, styles they are comfortable with or not, moves they have seen, etc. The first step is getting everyone on the same page when it comes to setting basics, like how to attach holds, how to tape, set screws, and the like.

Next, I wanted to get everyone comfortable with some of the bigger concepts of our setting at ABP. So we focused on volumes and how to use them, how to forerun, how to communicate with other setters, as well as terminology and concepts that allow us to explore what makes up a problem’s difficulty.

Finally, I started working to push people out of their comfort zones. This one is a continuous process, but I use a lot of challenges and assignments to get people to set things they normally wouldn’t. The focus is more on the process rather than the outcome, but my goal is to create a crew of setters that are willingly challenging themselves to try new things. I am planning on bringing in guest setters, as well as sending my crew out to other gyms to explore new learning opportunities.

CXC: From what I can see, it seems that men far outnumber women in the route-setting world. Why do you think that is?

CK: Since men outnumber women in climbing in general, it comes as no surprise then that they outnumber women in setting as well. In my experience as a climber having traveled around and outside the country climbing in many gyms along the way, I’ve noticed a trend of setting crews consisting of mostly if not exclusively men with the occasional woman.

CXC: Have you ever found it difficult to be a woman in a mostly male-dominated job?

CD: I have actually had very few instances where being female directly impacted my actual setting in a negative way. Most men that I have worked with have treated me with respect. As a Head Setter, however, some subtle, but noticeable instances have occurred. I have a harder time getting a crew of just guys to do tasks that they don’t enjoy, but the same request from a senior male setter is met with less resistance.

I have also had male co-workers do my work for me without asking, again something they didn’t do to the male Head Setters I have known. The best I can do is communicate with people when they do this, and try to keep it from becoming a pattern.

CXC: Any advice for female setters or future setters looking to get into the game?

CD: Develop yourself as a climber first. The best setters I have worked with are very good climbers (note: good, not just strong). They understand the relationship between the holds and the movement they encourage. When I am looking to hire a setter, if they are able to talk movement, and climb well, I am much more interested in them, even if they have very little setting experience.

CK: Don’t wait to be noticed – find the head setter and ask them what it takes to join and be on the crew. As for females, forget about the gender disparity and remember why you want to set. It’s not about being the only girl, you are the only you on the crew.

Keep up the great work, Christine and Caitlin! Hope you guys learned something from these two inspirational ladies. Let us know what you think about gender in the setting community in the comments below.