For hundreds of years, sheep herders roamed among the cliffs and caves dotting El Chorro, resting in the natural shelter-forming limestone caves. In the 1920s, the Spanish King ordered a hydroelectric dam built, cutting through “la garganta” (throat) of the valley. In order to ensure the workers stayed on task, he also had a “caminito” (little walkway) built along the sheer side of the cliffs, hundreds of feet above the pummeling river, which would later become the terrifying and exhilarating “Camino del Rey” (see more below). In the 1930s, rebels fighting the Franco dictatorship took refuge in the endless caves and cliffs traversing the Andalucian countryside. 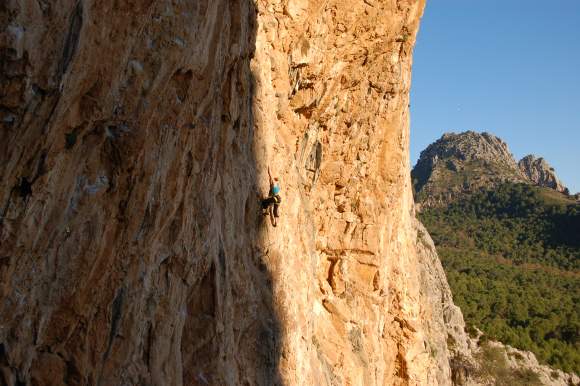 And in the 1980s, rock climbers (rebels in their own way) began bolting the magnificent routes El Chorro has become known for. Inspired by these tales, my husband and I descended upon El Chorro for our honeymoon in December 2011. What we discovered was the quintessential sleepy, yet gossip filled Spanish town, a fantasyland of climbing, with characters that we thought only existed in such fantasies.

Here’s The 411 On Climbing In El Chorro 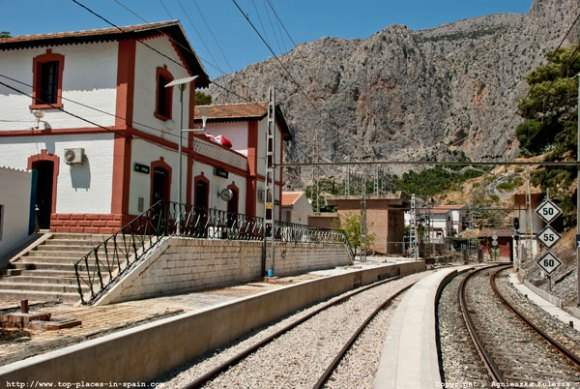 Read our climbing campus board training tips before you go on a climbing tour!

How to Get There

Coming from the United States, we found it easiest and least expensive to fly into Madrid, taking a day to adjust to the time zone, and then hopping on the Ave, the super-fast train down to Malaga. We had a few hours to wait (which we filled with getting hot chocolate and churros – a Spanish specialty) before hopping on an evening local train to El Chorro.  As a heads up, there are only two trains a day (unless it’s a holiday, strike, or they just don’t feel like running a train), so check and double check the time, and then don’t miss it.

The train got us into El Chorro late at night, at which point you realize that El Chorro is a really quiet, small town. There’s no one to greet you or give you info on where to stay, so plan ahead to know where you’re going, which is something we didn’t do and ended up wandering around with all of our gear for an hour before lucking out (and shelling out) at the lovely La Garganta Hotel.

How to Get Around

While we were able to get everywhere by foot (which definitely kicked our butts into shape), if we were to do it again – we’d rent a car. Car rental is available in Madrid or at Malaga airport. Hitch-hiking is also an available option.

Over 1000 sport routes flood El Chorro, all within a 5-30 minute walk from the town center. The British company, RockFax has an excellent guide book, essential to identify the endless routes. They’ve also marked the “Top 50” routes in the area which is helpful in narrowing down your tick list. You can order the guidebook online or pick a copy up at the local El Chorro climbing shop, along with any other essential gear you may have forgotten. 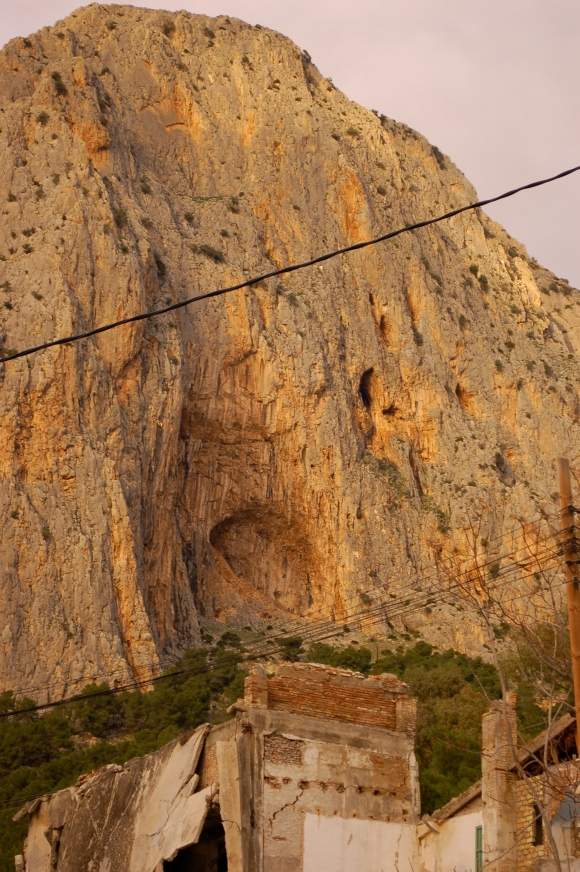 At the center of the El Chorro sectors is Poema del Roca, complete with long, tufa featured routes and spectacular views of the Gorge and valley. The crag’s namesake, Poema del Roca, is a must try and popular route. If you’re looking to get high, Amptrax is an 8 pitch, mostly bolted, moderate line at the Frontales sector. And then there’s the King of Crags – Makinodromo, filled with long, overhung, tufa-dangling routes: a 45 minute approach and an adventure all on its own; to get there you can either walk the Camino del Rey or cross through a few railroad tunnels and bridges (and yes, trains do pass).

However, if you have a car, there are endless sectors to visit outside of El Chorro, which we eyed enviously from the train as we left town.

When to Go to El Chorro, Spain

Mid-December to mid-January were pretty good conditions. The mornings and evenings left us wishing we’d brought our big down jackets, but by the middle of the day, you were down to your tank top. Locals say it’s too hot to climb in the summer, late spring, and early fall.

After sampling a little bit of all El Chorro accommodations had to offer, I would highly recommend La Finca La Campana. We’d originally crossed this place off as too far a walk away, but soon came to find out that this is where the party’s at: camping, bunks, private rooms, and apartments, in addition to an awesome communal kitchen, community space, laundry, and pool. Just as a side note – if you’re on a budget, there is free camping at the old abandoned church grounds, complete with a spring fed fountain. And remember those caves the rebels hid out in?

Apparently, so long as the cave is unoccupied, it’s yours for the taking. Climbers and hippies alike have set up some pretty sweet digs that you’ll pass on your approaches. 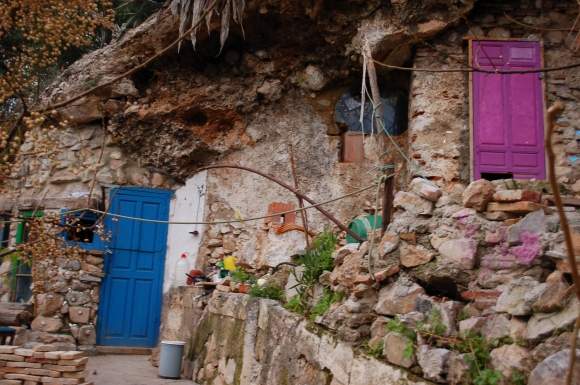 Locals and climbers alike have turned cliff side caves into their homes.

Food options are limited to a train depot cafe (skip the food here for sanitation’s sake and opt for a well deserved beer instead), a fancier restaurant at La Garganta (amazing, fresh-squeezed orange juice), and an overpriced, yet fully stocked mini market. Despite the plethora of options, having a car to get to the big super market in Alora (a 15 minute drive away) is pretty clutch. However, even without a car, we were easily able to hitch a ride (get ready for Spanish driving). Another option (which we failed to plan for) is stocking up on groceries in Malaga. There is a ton of fresh fish in the cities…you just have to be able to get there. 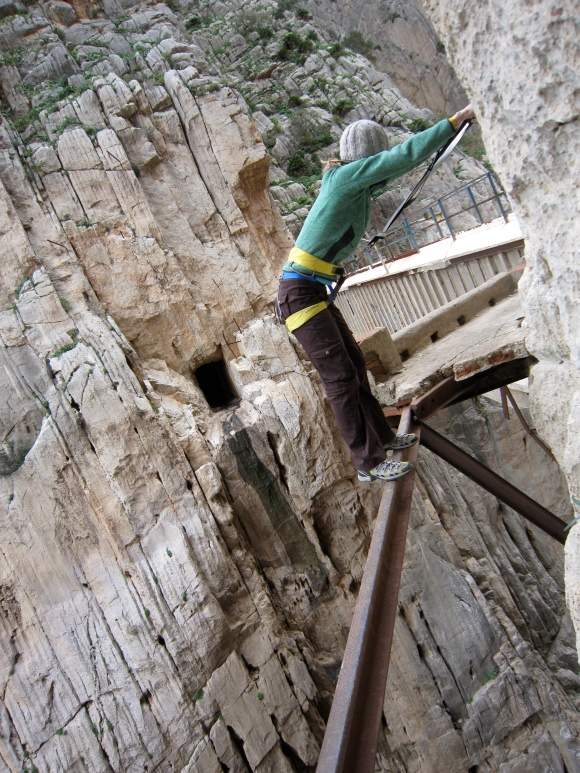 Cate traversing the remnants of the Camino del Rey.

After checking out the entire town in about a day, we ventured out for day and overnite trips around the area to Sevilla, Cordoba, Cadiz, & Malaga – where there are spectacular architecture and artifacts displaying the mezcla of Spain’s Christian and Muslim history. If you’re looking to stay close by, check out the infamous Camino del Rey – just watch this (and we recommend clipping into the fixed line on your traverse).