A trad climbing heaven, Refugio Frey is a self-contained Disneyland where the only ticket for admission is a 4+ hour hike and stoke to climb. Whether spending a week or a month there, the Refugio Frey is a rare gem in the world of backcountry alpine climbing: even while easily accessible from town, the only thing stopping you from climbing there for months on end is the tedium of the hike to town so you can replenish your food supplies. Situated in northern Patagonia in the high alpine of Bariloche, the dusty orange and pink granite spires called to me as soon as I Googled “Refugio Frey.”

How to Get There

A critical part of my trip—owning a car in (which enabled me to haul gear for mountaineering, snowboarding, and climbing)—means that I started in Chile. Driving from Chile’s “magic island,” Chiloe, I had to get my car’s paperwork in order before crossing the border into Argentina. This was surprisingly easy as the car’s title was in my name. If you’re driving a rental car (which plenty of people do), you’ll need to get a notarized letter from the car rental company. 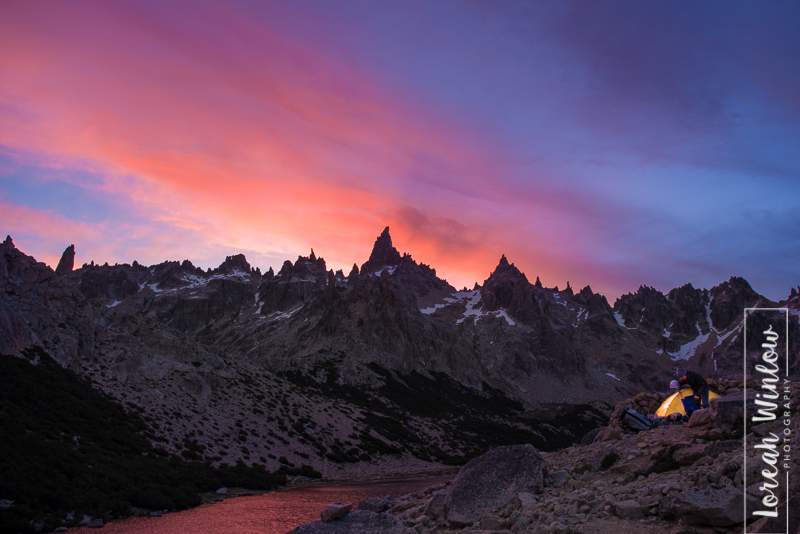 If driving a car into Argentina from Chile, buy inexpensive car insurance (liability only) for just the time you plan in being in Argentina (i.e. 7, 14, or 30 days). Small kiosks stationed at the border crossings can help with this task. Note that if you overstay your insurance in Argentina, you’ll need to re-purchase insurance before attempting to re-enter Chile (or risk denial of re-entry). Driving into Bariloche from Chile, pay attention to border crossing schedules —and if you happen to cross from Puerto Montt, check out the Argentinian town Villa Angostura for lunch and some shopping.

Also common—and very easy—is approaching Bariloche via bus. Grab a ticket from either Via Bariloche or Cruz del Sur if coming from major cities like Santiago, Buenos Aires, or Puerto Montt. If coming from far south in Patagonia (i.e. el Calafate), look into buying a domestic plane ticket.

Regardless, if you are flying into Argentina from abroad or crossing over from Chile, you will need to pay Argentina’s Reciprocity fee if you’re from the United States, Canada, or Australia. In 2015, this fee was $160—but your “visa” is good for unlimited entries/exits, and lasts for 10 years. Make sure you pay for the fee before you are at the border crossing—and be sure to print your receipt to show to customs agents.

If you plan on visiting just the Frey, take the bus. To arrive at Bariloche from any major city, it’s the cheaper and simpler of the options—plus when you’re in town, the local buses service mostly everywhere you could want to go.

Price aside though, a car is preferential. Having a car enabled me and the crew of friends I met at the Frey to visit surrounding attractions, and perhaps more importantly, continue climbing in other spots on our own schedule, with minimal logistical hassles. My Subie made it much easier for us to trek out to Piedra Parada (near Esquel) and eased planning for our trip to Cochamó (in Chile) as well. 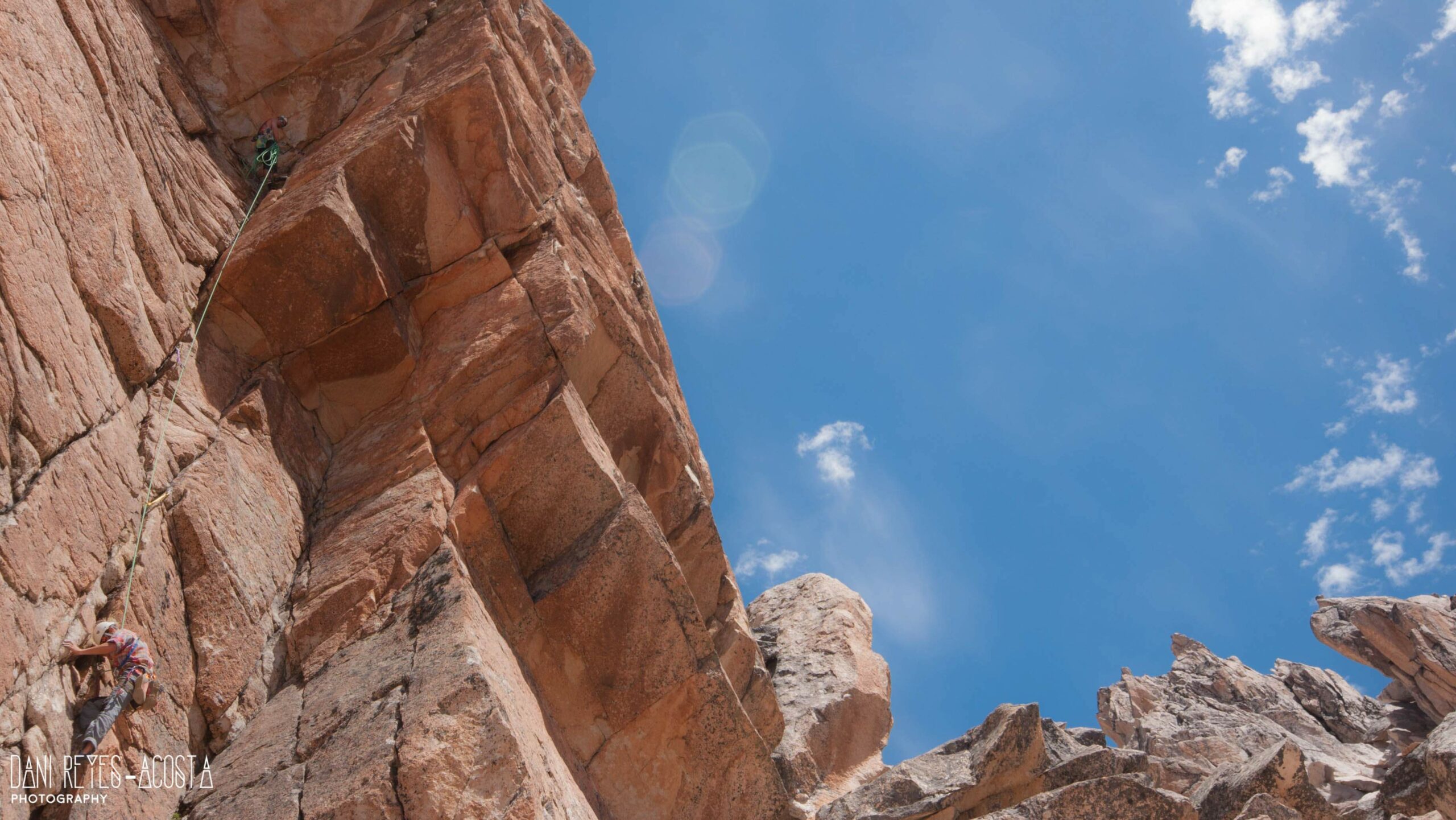 The first pitch of Sudafricana (5.10b)

About a 1.5-hour hike/scramble away from the Refugio, Sudafricana (5.10b, four pitches) on Aguja La Vieja is a beautiful line on the spire at the Frey’s western flank. With a beautiful roof, gorgeous orange granite, and a perfect crack that leads up to an exposed top-out, the views of the Patagonian Andes, Lake Nahuel Huapi, and neighboring Torre Principal are just one reason to try out this route.

Always wear a helmet for your safety, check this post.

Torre Principal casts its long shadow over neighboring crags like M2, El Abuelo, and La Vieja for a reason:  it is the highest spire to be found at the Frey. Of all the Frey’s classic climbs, the Ruta Normal is probably right behind Sifuentes-Weber. And as a five-pitch 5.10a, it’s easy to see why: the views are breathtaking and beautiful, and steep face climbing combines gorgeously with a wide crack and chimney. Just be sure to bring a headlamp for your descent—it’s a long scramble down at the end of the day.

Talking with fellow climbers in and around the Refugio is always a great way to grab beta. The crowd is international, so even if you don’t speak Spanish, you’ll likely still be able to get some good information going. A copy of the ever-growing guidebook is available in the Refugio, so ask around, and practice your Spanish climbing vocabulary to impress your new Argentinian friends.

An ideal time to visit is November to early December or mid-February through March. Remember that in South America, the seasons are reversed from North America, so November through March will be summertime south of the equator.

Our group climbed at the Frey between Christmas and the second week in February, when the weather was as perfect as can be. Patagonian weather is variable during the entire year, though, so come prepared. During our trip, days could be hot but the nights cold and blustery, and given that we all camped, an alpine-friendly tent with beefy stakes—plus picking a site with a good windbreaking wall—is critical.

When I left with my climbing partner the second week in February, we had to delay our departure by 1.5 days due to heavy rains, hail the sized of marbles, and lightning storms. The day we finally left? Drizzle at the Frey broke into full sun by the time we reached the Cerro Catedral base area. So just know that no matter in what season you visit, you could potentially get rough weather.

Something to note: crowds in January can be heinous, as this is when the concentration of Argentinian schools let out for summer break. 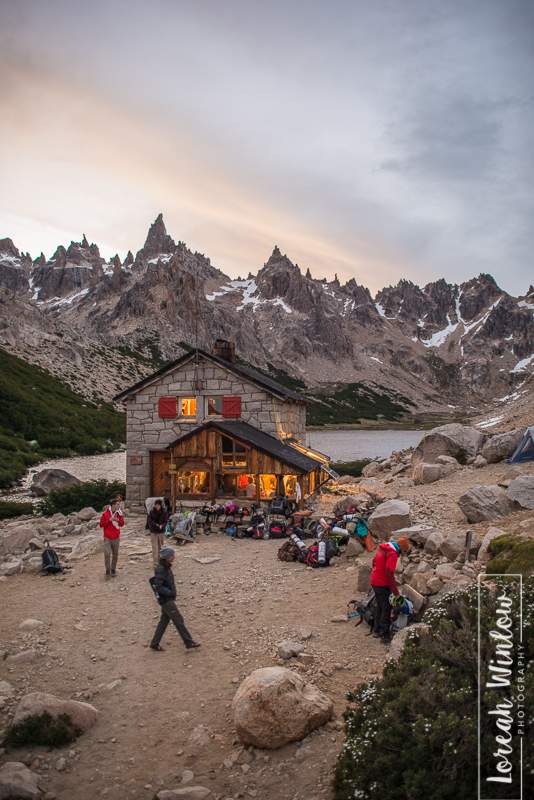 Refugio Frey and Laguna Toncek were overshadowed by Torre Principal.

After you’ve hiked the 4-6 hours up to the Refugio from the Cerro Catedral base, there are two lodging options: pay to stay at the Refugio (in a large dorm) or free camp. Since you’ll probably want to stay at least a week, camping is preferable, since sites are amazing, aplenty, and scattered all over the hillside behind the Refugio. Upon your arrival, drop your pack at the Refugio and ask about camping.

Regardless of the season in which you visit, finding lodging in Bariloche is difficult, since it’s a hub of outdoor activities for both Argentinians and foreigners. That said, make (and stick) to your reservations ahead of time.

There are a ton of hostels in town, but I like Bariloche Backpackers because the owner, Hugo, is super friendly, speaks fluent English, and even lived in LA for many years! You can find them on Facebook to book or ask questions, and the accommodations are clean, tidy, and in a super central location.

If you end up wandering around Bariloche after coming down from the Frey and don’t have a reservation, you can also try any one of the 5+ hostels on Salta.

When you’re at Refugio Frey, there are a couple of options. When you’re camping, there is the option to pay to use the Refugio’s kitchen (less than $2 per day per person), which has running water, cookware/plates/cutlery, and a two-burner stove. This option is nice for the obvious reasons but also because it gives you an opportunity to meet other climbers and learn from others who have done some of the climbs you’re interested in. The Refugio also has a fully-equipped kitchen and serves breakfast, lunch, and dinner. Try one of the pizzas the Refugieros (Refugio workers) cook up, or order a bottle of wine or beer.

Craft breweries Cervecería Berlina and Cerveza Manush have the best craft beer I have drank in my entire year in South America. Their food is great too—and if you visit at the right time, you might catch happy hour.

Las Brasas (less than two blocks away from Manush, on Ada Maria Elflein 163) has AMAZING sandwiches. Their schedule can be a bit wonky, and they do close during the afternoon, but it is worth the effort to swing by for a bite. Note that Las Brasas has two outposts at this address—the sandwich shop on the corner (which you should visit)—and a sit-down restaurant. 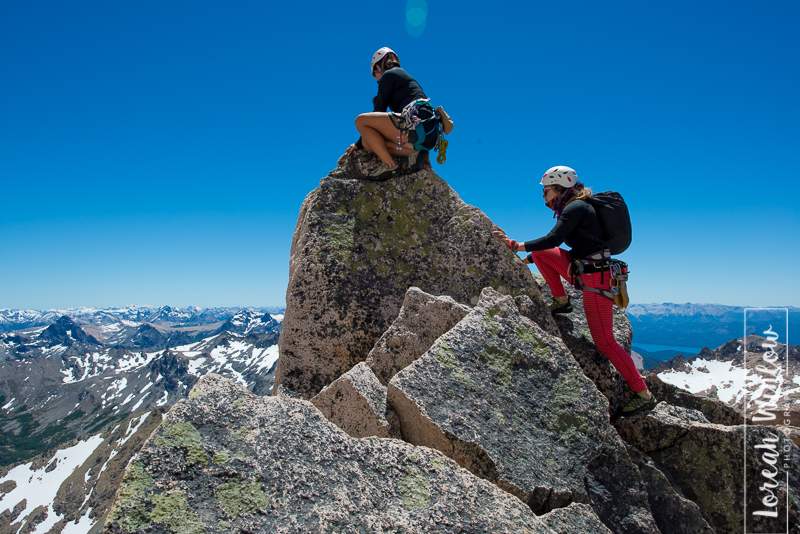 Hang out on the dock, hike around Laguna Toncek, go to town to buy more food, or walk the water line that (might) be strung up on the lake. If you’re feeling like you’re in a reading mood (or it’s raining), the Refugio has a mix of climbing magazines in Spanish, French, and English, plus various card games.

Bariloche is a great place for a rest day (or two), with excellent restaurants, craft breweries, and innumerable chocolate shops lining its main streets. Visit Mitre, two blocks north of the lake, to exchange American dollars for Argentinian pesos and sample chocolate from any of the 10+ chocolate shops. There’s also a local art market daily where Mitre begins, adjacent to the Centro Civico.

Now that you’re ready to go, all you have to do is buy the plane ticket, brush up on your Spanish climbing vocabulary, pack your bags, and go.

The Frey will likely be one of the best trips of your lifetime—so give yourself the time to explore the area. Two weeks is good, three is better, and if you can, journey to Piedra Parada while you’re there—you won’t regret it.

Dani Reyes-Acosta is a digital marketing consultant, freelance writer and photographer, founder of the Not Lost, Just Discovering project, and lover of rock climbing, splitboarding, and surfing. When she’s not nursing her torn ACL or working on a new taco recipe, she’s plotting her next trip. Follow along on Instagram @notlostjustdiscovering or @danicatalina, or on Facebook.

Loreah Winlow is a freelance project manager and photographer hailing from Washington but currently exploring the crags and canyons of Arizona. The best travel buddy EVER, you should follow her adventures on Instagram @loreahwinlowphotography or Facebook.