Women On Lead: Cara Dozier, Owner Of Virginia Beach Rock Gym; Climbing gyms are perhaps the most valuable tool that we climbers have to build strength, improve technique, and prepare us physically and mentally to get out and crush on real rock. Gyms are probably where most of us started, and where a lot of people will end up staying, as indoor climbing quickly becomes a sport of its own. So while we love spending hours in these buildings with ever-changing routes, perfect conditions year-round, and an atmosphere that encourages and builds our beloved community, it’s easy to forget that climbing gyms are a business, and running one takes a lot of hard work.

Check out another amazing interview with Shauna, here!

While it’s still a very male-dominated industry, more women are taking leadership roles in building these places up. As business owners, climbers, and very often wives and mothers, they juggle more than we would ever guess from the outside. Blending your passion and career is tough, but those who take it on are strong and confident–and they’re a force to be reckoned with. 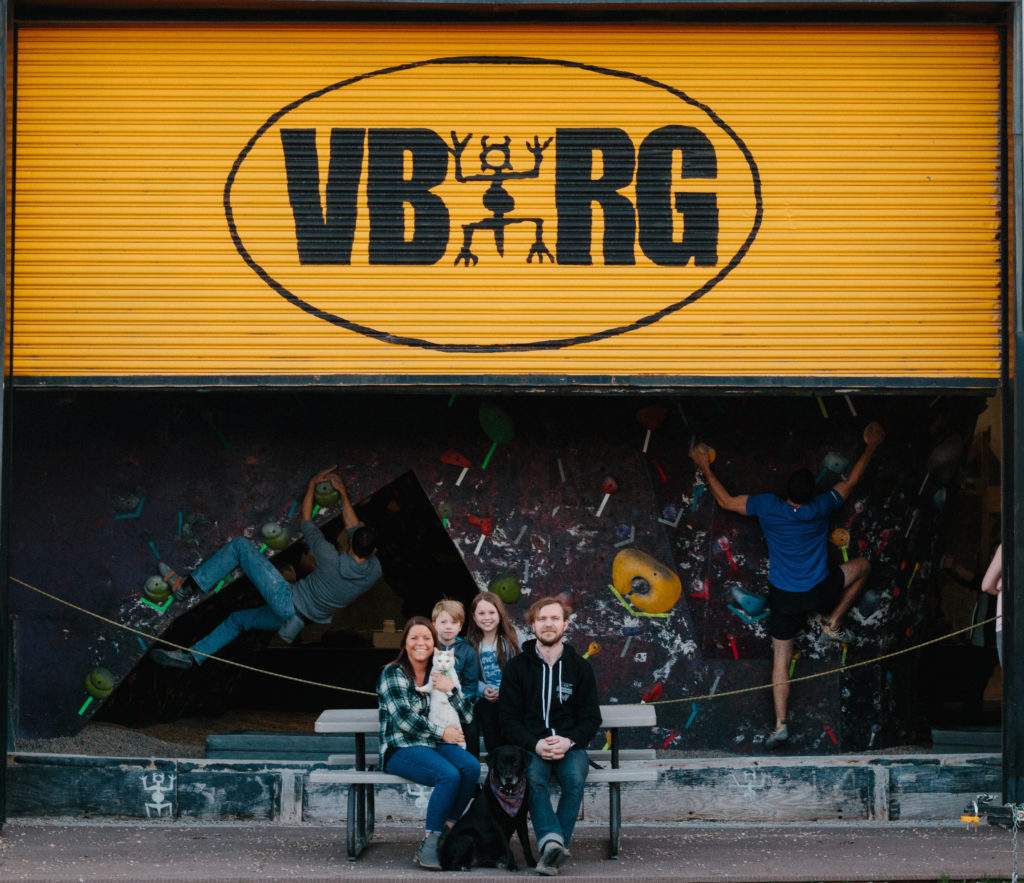 Cara Dozier and her family outside the Virginia Beach Rock Gym

I had the chance to sit down and chat with Cara Dozier, co-owner of the family-owned and operated Virginia Beach Rock Gym in Virginia Beach, Virginia, and one of those very women making an impact in the climbing community. Cara’s personality exudes kindness, warmth, and very notable confidence, which serves her well in dealing with the challenges of owning a rock gym in a place as foreign to climbers as Virginia Beach. Virginia Beach isn’t exactly known for its climbing–it’s flat, featureless, and the closest elevation gain is about 4 hours away. Despite those challenges, Cara has spent almost her entire life helping to build the passionate and eager climbing community that exists here today. 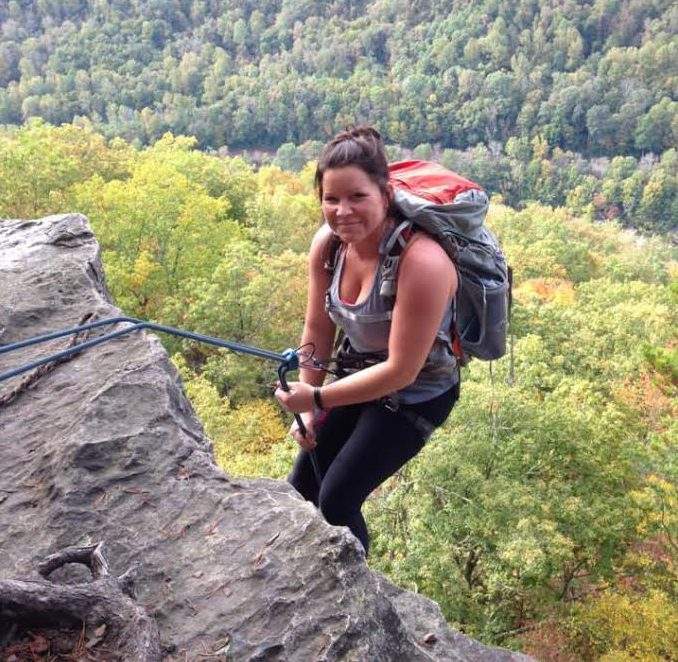 Confident, relaxed, and ready to rappel.

The Past: Where Cara Dozier Started Her Journey

When her family moved here over 20 years ago from San Diego, her Dad (an avid climber himself), recognized the potential for something new and cool in an area known for its surfing and water sports, and thus the Virginia Beach Rock Gym was born. “I can remember sitting on the floor of the warehouse when I was 8, watching the walls get built. I learned to climb on these walls–everything I know about climbing, I’ve learned from the people who’ve walked through our doors.” Cara Dozier and her brother climbed with their Dad a little bit growing up, but it was within the warehouse walls of her beloved gym that she really became a climber.

In its two decades of existence, the rock gym has seen many a dirtbag-climber whose philosophy was “work to climb”, and they offered some amazing experiences along the way. “These people were my mentors,” Cara Dozier said. “They taught me everything about climbing, both as a sport and as a business. My parents didn’t just give me the rock gym–I had to start from the bottom up, and working with and under these people has taught me more than I ever thought possible.”

One of the things that draw people to climbing is the familial feeling of being a part of the community, and it’s obvious that the people Cara encountered while growing up in the rock gym have been huge influences in her life. It’s this same feeling of warmth, friendship, and atmosphere of mentorship that Cara still brings to the gym today. 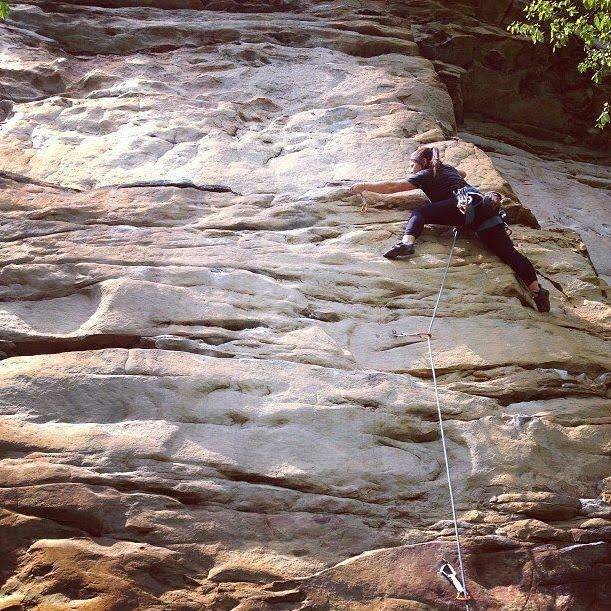 Applying the many lessons she’s learned inside, and outside.

A Struggler: Story Behind The Business

But while Cara describes it as one of the most motivating things in her life, owning a rock gym is far from glamorous. “I had to start from the bottom up, scrubbing toilets and belaying for birthday parties, and I think at times it was harder because my parents owned it.” These days, as co-owner with her older brother, she describes it as nearly impossible to separate work, life and climbing. “It’s tough because there’s no climbing in the area, so I can’t go outside to relax or escape. At the end of a long and crazy workday, all I want to do is climb–but to do that, I have to be at work!

That makes it a challenge, but honestly, I wouldn’t trade it for the world.” It seems like a dream come true to meld your passion with your career, but there are undeniable challenges with that, and it’s necessary to have other things that keep you balanced. For Cara Dozier, that’s being a mom, a YoungLife leader, and watching her kids grow up in the same climbing gym that she herself grew up in.

Cara Dozier’s eyes light up when she’s talking about her kids. “My kids keep me motivated–they both love to climb!” In fact, her proudest climbing moment doesn’t involve a grade, route, or destination she conquered–but watching her daughter send a 5.10c on her very first outdoor climb (when she was 8 years old–like mother, like daughter). Being a climber and a mom has its own set of challenges–you may not climb as much, or as hard, and you always have to look out for someone else–but “just watching them climb makes it so worth it.”

For Cara Dozier, this feeling can be summed up in a moment she had with her daughter. While she was scouting out a warehouse for a possible new gym location, she said she remembered her daughter “sitting on the floor of the warehouse, about the same age I was when I started climbing, and she was just looking up at the walls of the warehouse imagining everything, just like I did with my parents twenty years ago.” 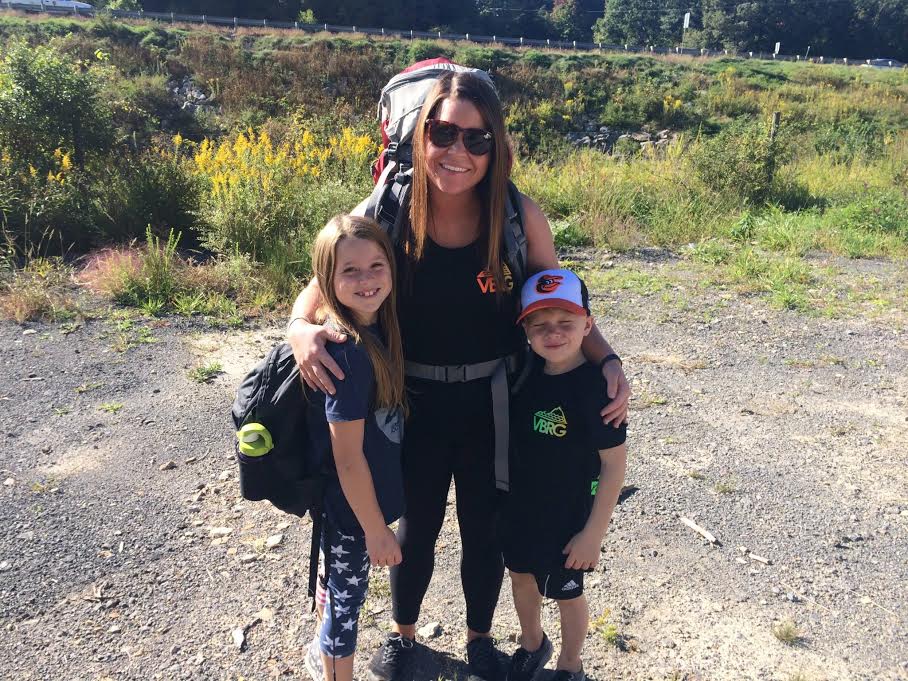 Out for adventure with her two kiddos.

For Cara Dozier, family isn’t just her kids, but the community she immerses herself in every day. “We love being a part of people’s climbing stories,” she says. For a lot of people in this area, the gym is their first exposure to climbing, and they can learn everything they need about climbing. While larger gym chains seem to be getting more mainstream these days, it’s the mom-and-pop type gyms that keep the bond in the climbing community so tight.

“If you’ve been to the gym a couple of times, I’ll remember your name. We want you to feel welcome like you’re a part of who we are and what we do, and I think that resonates with a lot of people, and they find a home here.” It’s this personal and deep involvement that keeps the Virginia Beach Rock Gym alive with a loyal community of climbers. But, for Cara Dozier, that means never being able to stop. When she talks about the challenges of balancing work, family, and climbing, she does so with a smile and the calmness of a seasoned professional.

Cara Dozier has some advice for women who are thinking about breaking into the climbing gym industry. “More than anything else, you have to be strong, tough, and you have to be confident in yourself. It’s still a male-dominated field, and that can be intimidating. If it’s what you want, pursue it–but don’t let it ruin your passion.” 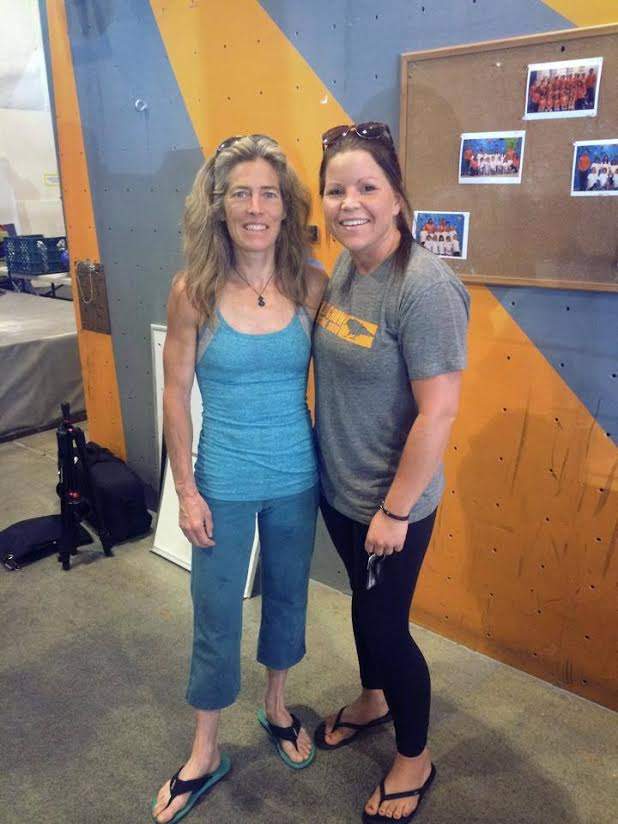 Cara Dozier and arguably the most ground-breaking female climber ever, Lynn Hill.

Climbing is built on local communities that grow, shape, and encourage climbers of every level. Without gyms and the amazing climbers like Cara Dozier who own them, we probably wouldn’t be where we are as a community. Cara Dozier, her brother, and the Virginia Beach Rock Gym have been the catalyst for the growth of climbing in Virginia Beach, and it takes an extreme amount of passion and dedication to build and sustain a community like that.

Cara Dozier’s story as a climber and a climbing gym owner is an amazing example of living your dream and sharing that spark with other people. As we raise younger and younger generations of climbers, we need people like Cara Dozier at the places where we all start out–our local climbing gyms–to inspire, motivate, and encourage them to pursue their dreams.