Kai Lightner has taken the climbing world by storm over the last couple of years. If you have been fortunate enough to watch Kai climb, you also most likely saw his mom, Connie Lightner, who is equally as inspiring in her dedication and support for her son. If you had the opportunity to see Kai and Connie interact, you know that the rapport these two share is one of discipline, sacrifice, respect, and love. For today’s post, we chatted with Connie on what it’s like to be raising one of the world’s best climbers. 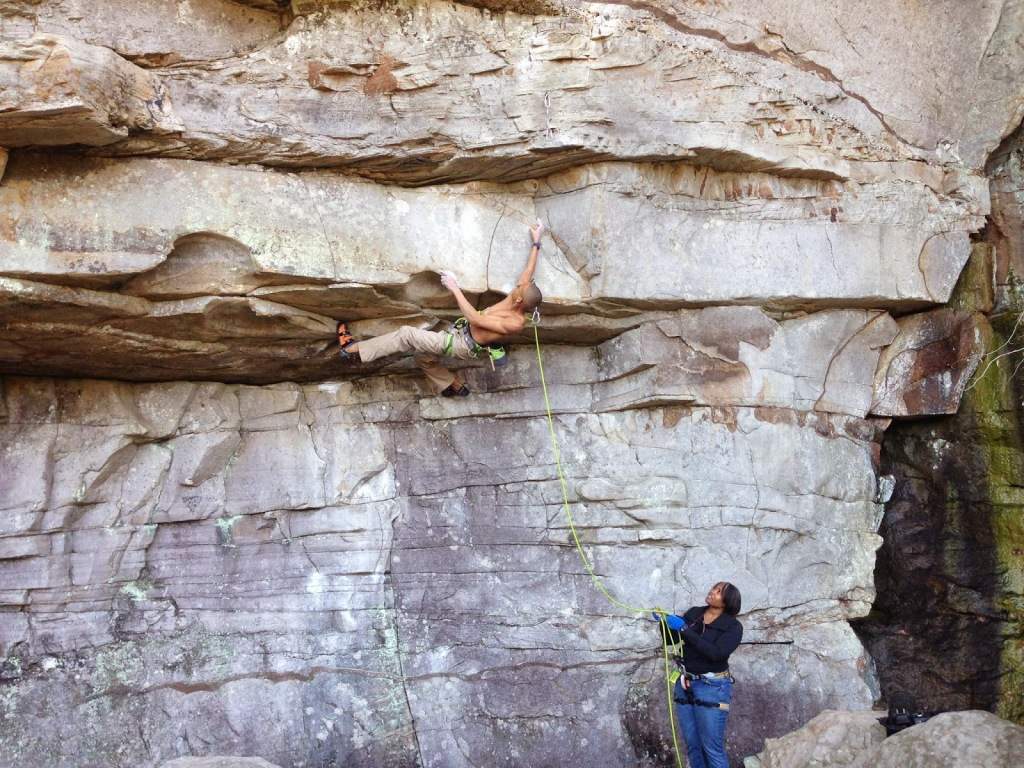 CXC: It’s clear that you work very hard to and have a vision to raise Kai to be a good person. How do you, as a non-climber, see climbing complimenting Kai’s development as a person? How have you used climbing as a tool for parenting or teaching Kai?

CL: I tried to push Kai into basketball, soccer, football, and baseball. He tried them all, but insisted that living at the climbing gym (and now crag) is his passion. The more he got into the sport, the more I realized how climbing inherently involves so many life skills that one needs to excel in any career path. That realization got me 100% on board. 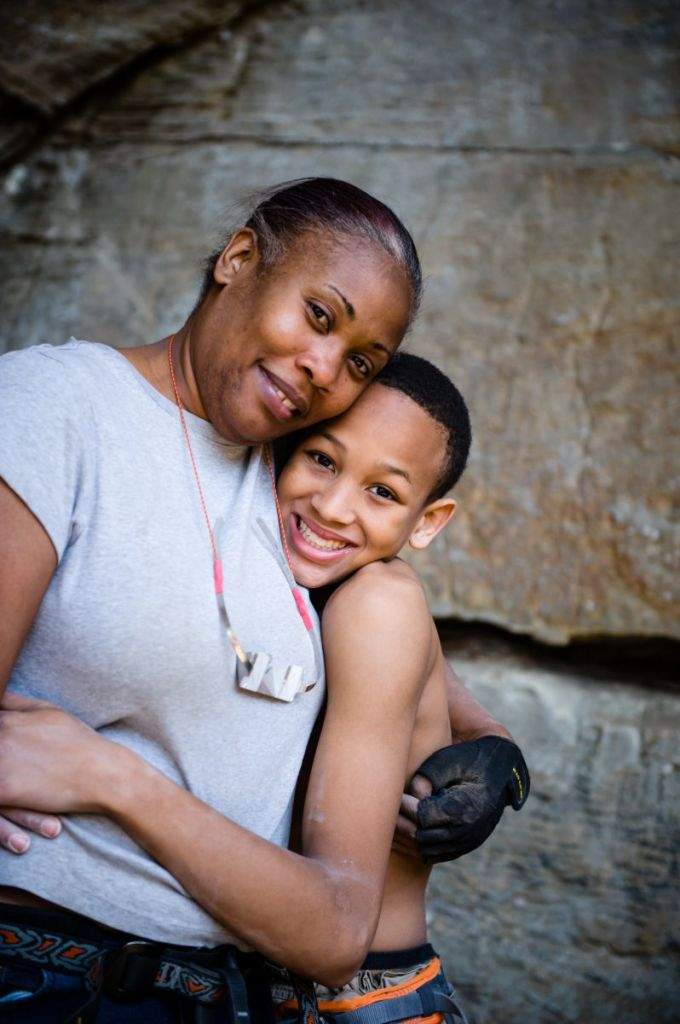 Connie’s realization that climbing inherently involves many necessary life skills got her 100% on board. (Photo credit: Elodie Saracco)

I always describe rock climbing to non-climbers as the perfect blend of swimming and chess. While climbing you have to constantly plan 1-2 moves ahead (to avoid getting stuck and falling), while every muscle in your body is engaged. That inherently involves the ability to think under pressure and extreme physical fitness. Competition climbing requires discipline, physical and mental strength, as well as the ability to accept and learn from failure. Those are all life skills that the average adult struggles to learn.

Kai is so dedicated to rock climbing that he has committed to mastering all of these skills. For me it’s a 2 for 1 deal. I pay for him to pursue his dreams in the sport, and in return he is happy living his dreams and I am elated helping him build a strong arsenal of skills that will help him be successful in whatever career path he ultimately chooses. I also get the added benefit of using climbing to “encourage” him to do well in school.

CXC: What are the most important things you can teach a child?

CL: As a parent, I think our primary job is to help our kids develop all of the tools that they will need to be successful in life. This includes instilling the value of education, discipline, and hard work. I believe it’s equally important to teach them that although success should always be the goal, failure is inevitable. It’s usually an unspoken part of the road to success. The people that make it to the top have often mastered the skill of learning from their disappointments while continuing to push ahead.

For Kai, the importance of humility and being a good person has always been an overarching theme, while trying to teach him all of these life skills. As the saying goes, “To he who much is given, much is required.” Kai is always reminded of his responsibility to give back. 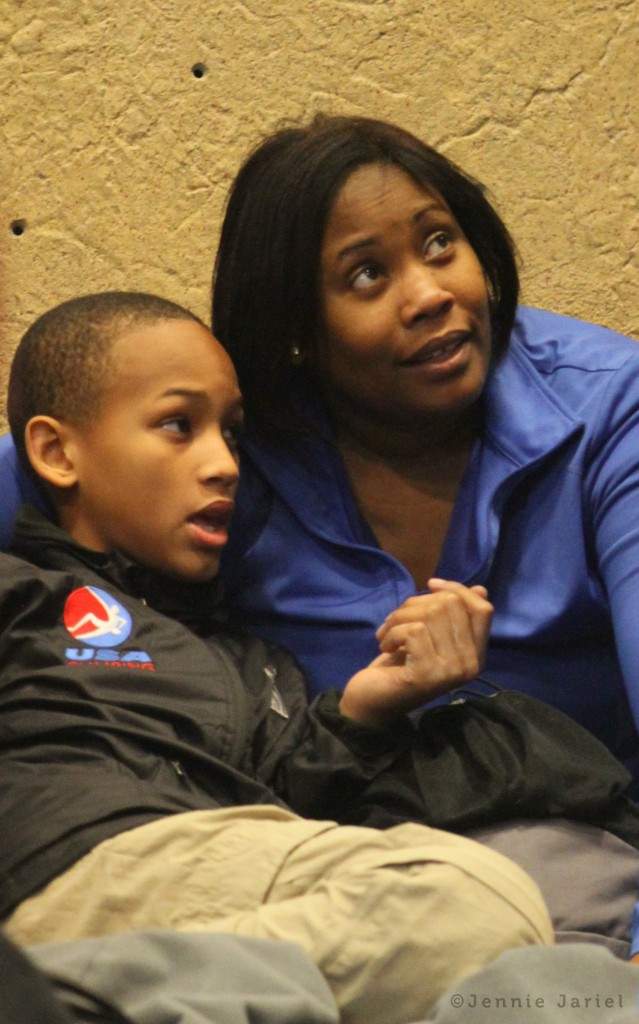 Connie often belays Kai: “When Kai was younger and would get scared making tough moves, I would tell him to focus on the climb, and let me handle his safety.”

CXC: You have your PhD and a successful career. Obviously you’ve worked very hard to get where you are. How do you balance your personal career with supporting Kai’s career?

CL: My job at the university and work as a parent, often blend in many ways. My job as a professor entails teaching discipline, work ethics and how to master difficult concepts while encouraging students to believe in themselves and set high goals/standards. This has also been my role in Kai’s journey through the sport of rock climbing. I guess in principle, the balance is not difficult. I think time is my biggest issue. I need about 3 secret hours in my day that no one knows about. That’s when I will schedule “me” time. 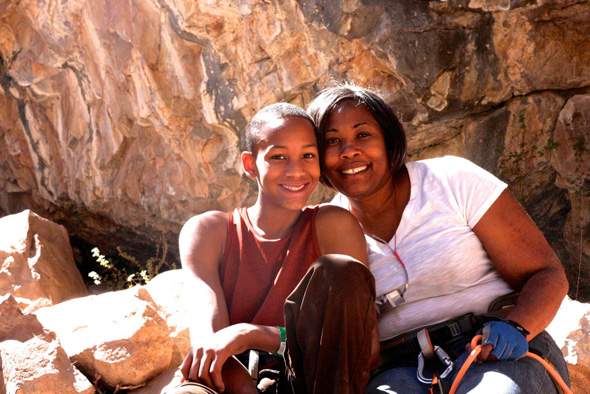 Despite having a love/hate relationship with the outdoors, Connie admits “Kai’s adventures have brought me to some beautiful places that I would have never seen.” (Photo credit: James Mills).

CXC: One of the salient features you notice when you see Kai climb is the fact that he’s black. You can count the number of black pro climbers on two fingers. By virtue of its participants, rock climbing is more accepted and popular among white culture. Yet, obviously Kai leaves the climbing gym and is still a black teenager. How is climbing accepted in Kai’s and your world, outside of climbing?

CL: When Kai was younger they used to tease him a lot. We have both heard our share of comments regarding what activities are the norms (or not the norm) for blacks and/or whites to do. I used to have talks with Kai to help him understand some of the comments that he would hear. I explained that most people tend to stick with traditions that are popular in their community. If you think about the food you eat, music you listen to, even the religious practices that you adopt, they often mirror traditions that you learned from your family or neighborhood.

Although this practice is common, I have always stressed that the world is much bigger than our community, and it’s ok to venture out and “take the road less traveled.”

Over the last few years a lot has changed. Many of Kai’s non-climbing friends have tried rock climbing and they think it’s awesome that he stuck with it. They are very supportive and admire all that he has been able to accomplish.

Personally, I love that he has become a great role model in our community and a good example for why it is important to be an individual and follow your dreams and passion…even when it’s a little outside of the norm.

CXC: As Kai continues to branch into this world of competitive climbing, including climbing in the great outdoors (your favorite), you’ve been along for the ride. You’ve been exposed to these new climbing adventures and experiences, alongside Kai. Have these new experiences forced you to be self-reflective at all? What have you learned from Kai through these experiences?

CL: I’ve always been a creature of habit, yet Kai has forced me to open my mind to trying new things. It’s no secret that I have a love/hate relationship with the great outdoors. For all of the negative experiences that I endure trudging through the woods and spending days covered in dirt, I have had an equal number of positive experiences that I have been fortunate to enjoy. Kai’s adventures have brought me to some beautiful places that I would have never seen, had he not ventured into the world of rock climbing.

I think I have developed a love for traveling that I will continue, even after he leaves home. I plan to stay in hotels, however, not campsites.

The most impactful experiences that I have gained through rock climbing, don’t actually involve climbing, but people. For starters, it takes a special personality to live out of a van for weeks at a time, with 2 changes of clothes and limited showers, just so that you can climb mountains during the day. I have found that people with that personality tend to be less judgmental of others, and accepting of differences (and diversity) in general. Although my “dirt bag” description sounds very offbeat, this has been a beautiful environment for me to watch Kai grow. The rock climbing community has taught me a lot about people.

Although it seems like evil often prevails in the world, we have always been surrounded by a very supportive climbing community that is filled with a lot of great people. 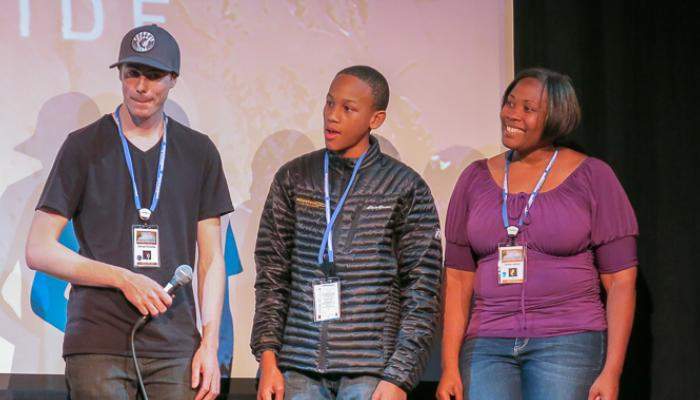 Kai and Connie were featured in a film, 14.c, by George Knowles (left), that won for “Most Inspiring” at the 5 Point Film Festival.

CL: No idea. Kai is very bright and outgoing. He has endless options that he can pursue. I don’t want to take anything away from the “dirt bag” life, but I hope that in 10 years he is beginning some career while continuing to enjoy climbing (on the side). As for me, I love teaching, and will likely be teaching at a university until retirement. Additionally, in 10 years I hope to get my paychecks back. Since I had Kai 4 months before beginning my first job (excluding lifeguarding as a teen), I have never enjoyed the luxury of spending MY money on myself. I LOVE MY KID. But I look forward to splurging on myself one day.

CXC: What is it like as a mother having your son so publicly spotlighted?

CL: Weird. As a parent, our first instinct is to be protective of our kid. When your kid is in the spotlight, you lose a lot of control. I had to learn to focus more on training Kai on the proper way to conduct himself, and trust that he could handle the spotlight. Luckily he is a good kid. That helps me worry a little less about him.

CXC: Have you ever thought of moving somewhere for Kai’s climbing?

CL: Fayetteville, NC is not an ideal place for climbing. Kai would live out of our SUV if I would agree to move. I would love to help him continue growing in his sport and be in a more climber-friendly area; however finding stable, yet flexible employment is not easy these days. . Since I am his sole support system (physically and financially), my job rules…..for now. 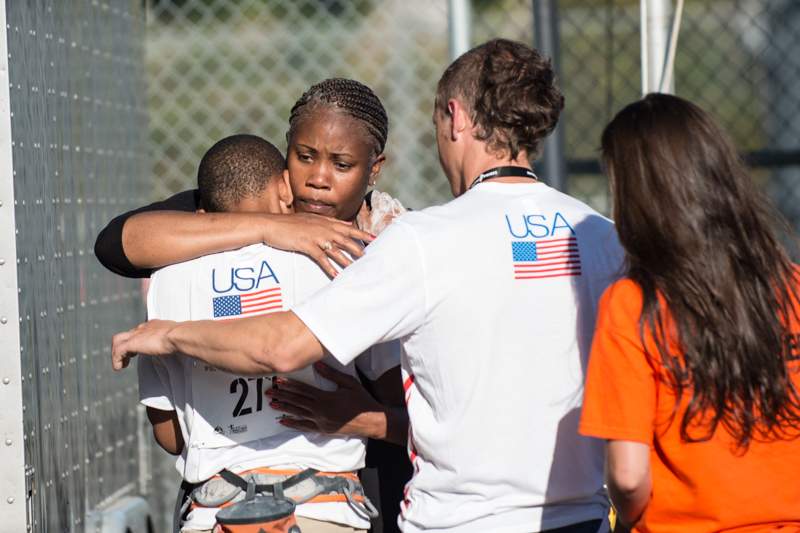 Kai is consoled by mom after falling in his final climb and finishing just out of the medals in the 2013 IFSC World Youth Championships (Photo credit: Doug Baird).

CXC: You often belay Kai. What’s going through your head while you’re belaying him?

CL: I am always focused on keeping him safe. I have belayed Kai for 10-20 hours a week for the past eight years. I can tell from his body language what he is thinking as he climbs. This allows me to easily anticipate his moves and make adjustments to keep him safe. As with any belayer, it’s all about trust. I have to trust that Kai will make good decisions while climbing or warn me to be prepared when he becomes uncomfortable with a section. He has to trust that I am always alert and prepared to react appropriately to keep him safe.

When Kai was younger and would get scared making tough moves, I would tell him to focus on the climb, and let me handle his safety. When he continued to hesitate one time, I told him to think about it this way, “It’s not about the love; it’s about the doctor’s bill. If you get hurt, I have to pay the doctor’s bill. So it’s in my best interest to keep you safe.” He giggled, and then committed to the move.

CL: For the most part, it’s just me and Kai. My sisters live a distance away, and all of Kai’s grandparents are deceased. Luckily I have some friends in the climbing community that have become like extended family. Climbing parents are pretty awesome. We all “temporarily adopt” each other’s kids at times to help out.

My mom was one heck of a role model. She raised 5 of us (my 2 sisters and 2 cousins) alone, while traveling on the road with me as I competed in gymnastics. If she was able to do it with 5, there is no way I can complain with just Kai to care for. Then again, JUST KAI keeps a VERY busy schedule, but that’s my baby.

Thank you Connie for taking time out of your “three secret hours” to talk with us. Check out Connie and Kai in 14.c. We wish you and Kai the best!