An interview with Majka Burhardt: When I first heard about Majka Burhardt I was immediately struck by all she has accomplished as a professional climber, guide, filmmaker, author, and entrepreneur. In 5th grade, she won the award for the most checking penalties in the boys’ hockey league, and since then has had an impressive career as a climber, including an ascent of The Bachelor Stroll (WI6) in Frankenstein Cliff, New Hampshire. Her most recent endeavors have been in social entrepreneurship and conservation.

The film “Namuli” documents the expedition which brought together climbing, science, and conservation in the mountains of Mozambique. In 2014 Majka and Kate Rutherford led an expedition of scientists and established routes on Namuli to enable the collection of specimens from an area with tremendous biodiversity and beauty.

Must read an interesting interview with Sierra Blair-Coyle; a climber and model!

An interview with Majka Burhardt

CXC: Tell us a little more about how you became “obsessed” with the mountains of Mozambique. Why Namuli?

MB: I get obsessed with things that are rich and complex and the mountains of Mozambique are a perfect example. Once I saw photos of the inselbergs (granite island mountains in the north of the country) I started learning anything I could about Mozambique and was hooked. Mount Namuli is Mozambique’s second-highest mountain and a critical target for conservation in southeast Africa. It has been understudied and sampled scientifically, held important data and discovery potential, and had a beautiful looking southeast face of granite…

CXC: As an experienced climbing guide, how was it different to lead a group of non-climber scientists? What was the funniest/most unique moment of the climb from a climber’s perspective?

MB: The scientists we worked with on Namuli shared many things with Kate and me, the climbers—namely that we all had a purpose and reason to be upon the face. The pairing of our purposes made it a very different experience to teaching the scientists how to access vertical terrain and move safely and confidently in that terrain. Scientists and climbers are a great deal alike in that they pay attention to the micro detail and are obsessed with the greater outcome.

One of my favorite moments working with Harith, our Mozambican herpetologist, was him pointing to a hanging corner and chimney system 300 feet above us and saying that if he could ask for anything in the world that he’d ask for a helicopter to take him to that “fissure.” I got to turn to him and tell him no problem. 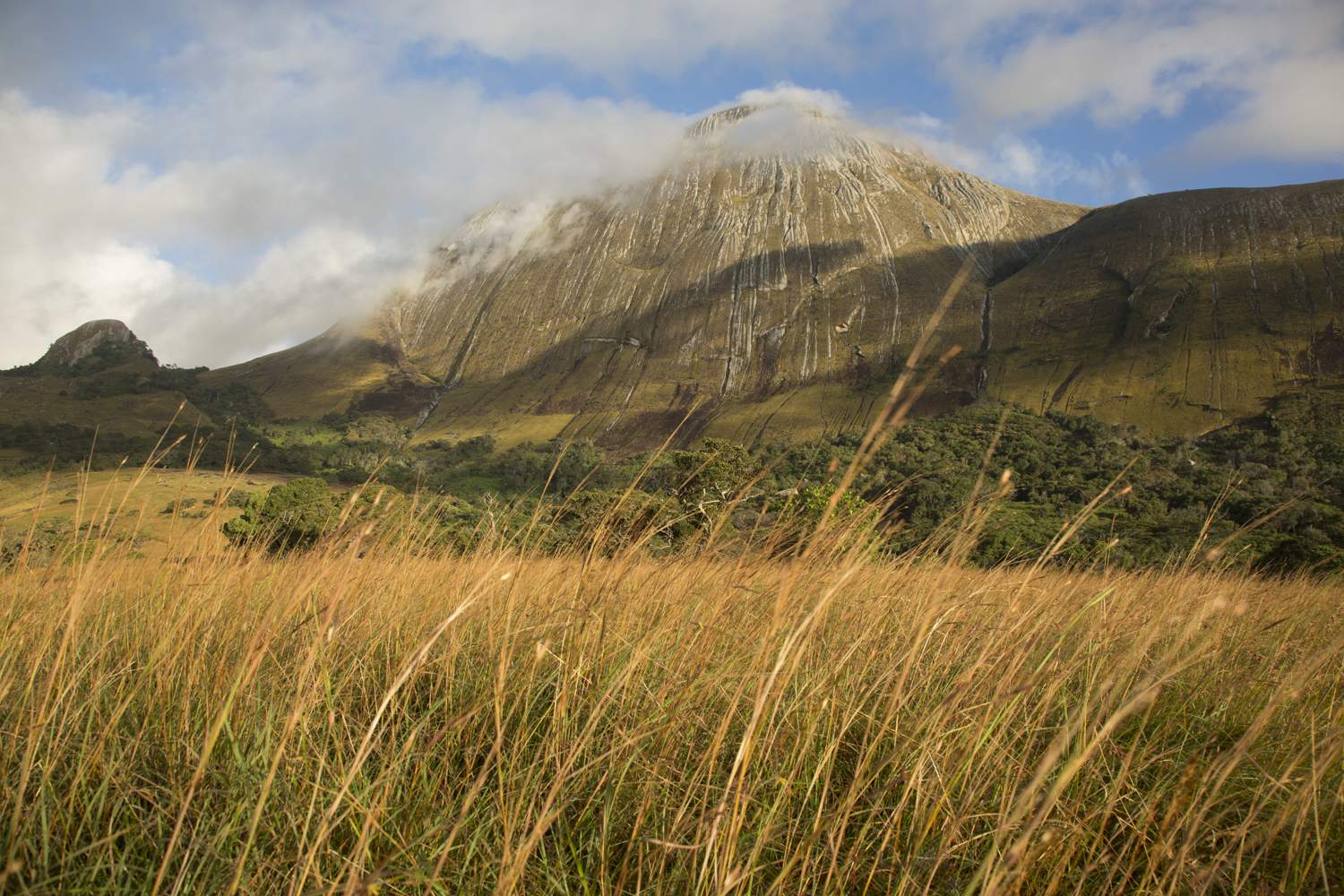 CXC: It seems like the community in Namuli saw you as a part of the research and community outreach team. How did they perceive you and Kate as female climbers leading the group?

MB: 2014 was my second time visiting Namuli. Both in 2011, and again in ’14, the members of the Curruca community on Namuli were very welcoming to me as the leader of the expedition. As for me being a climber? That was only something that we all understood after it happened. This past year, in July 2015, I was back in Mozambique working with several members of that community and I fielded requests from all of them to get up on the wall with me during my next Namuli visit.

CXC: Was the purpose of climbing in the project solely to enable scientists to access areas for specimen collection? Do you see Namuli being developed to attract recreational climbers?

MB: Kate and I chose our route on Namuli specifically to give scientists access to the areas of the 2,000’ face they deemed important for their collection. At the same time, how we linked those areas and how we created our line was with the minds and hearts of climbers. It was important to us to climb something both beautiful and useful. Namuli is an exceptionally gorgeous granite mountain and has a greater purpose as the ancestral home to over 2 million Lomwe people in Mozambique and Malawi, the actual home to close to 10,000 people, and the watershed for many more.

The priority for Namuli’s future is to pair the conservation of its unique environment with development and opportunity for its people. Do I believe there is more climbing to be done on Namuli and in the surrounding area? Yes. Do I think the more interesting conversation is about the broader context of this mountain and what these ecosystems mean for the people who depend on them? Absolutely. 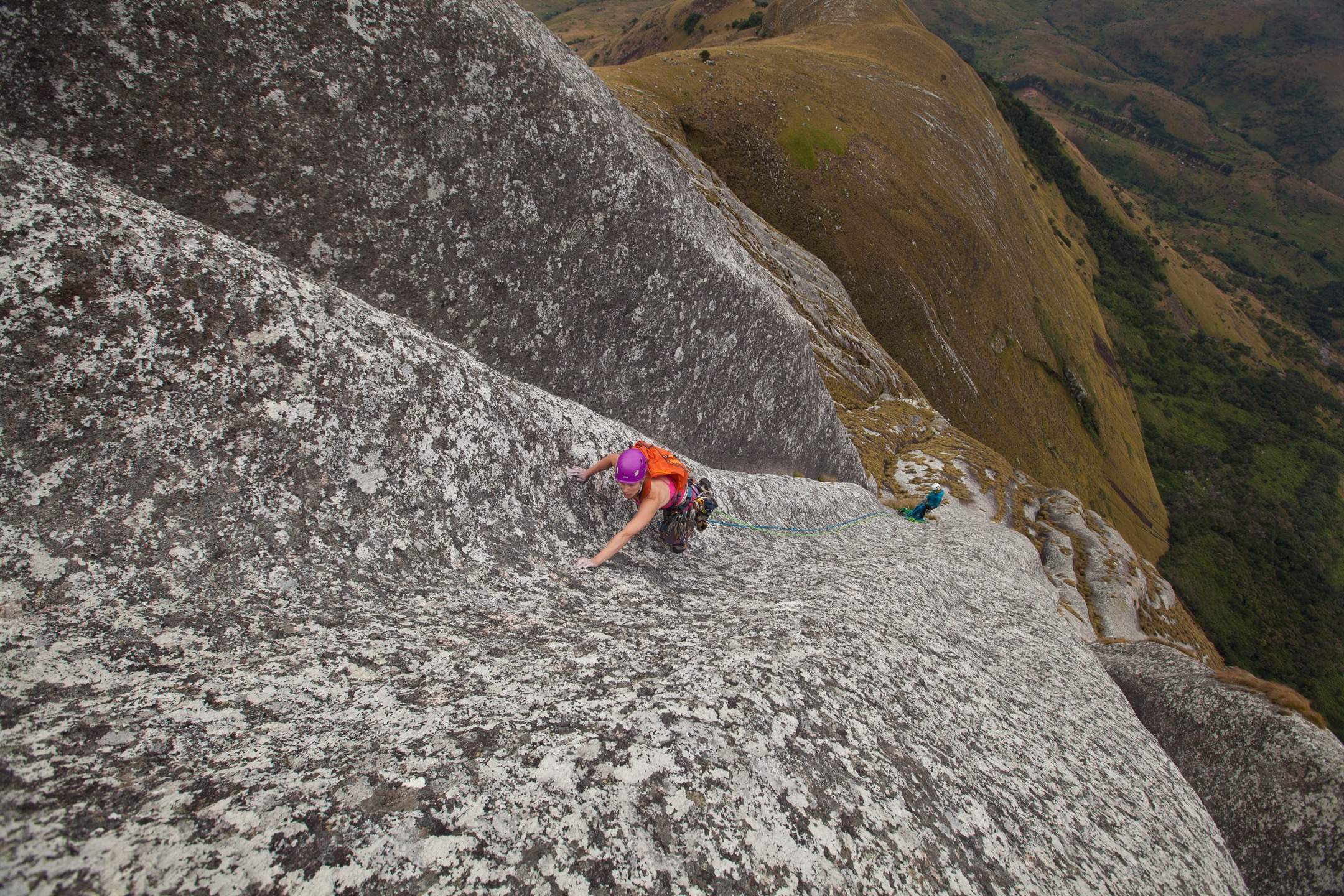 Majka running it out on the final slab crux of Majka and Kate’s Science Project (5.10-IV, 12 pitches.) Photo by Rob Frost.

CXC: What do you see as the role of climbers in conservation here in the US?

MB: I believe climbers have a unique role to play in advocating for the environment and the outdoors and that it’s up to us to do this with humility and honesty. Climbing, in and of itself, does not make us better and greener people—rather it’s what we are aware of, how we educate ourselves, and how we choose to contribute that will allow us to make a difference.

CXC: How have partnerships with female climbers inspired you both on and off the wall?

MB: The majority of my climbing partners— female and male— inspire me and I think the best partnerships and those with the most longevity have the right blend of motivating you, inspiring you, and understanding you. What sets my female partners apart is that they often become my closest friends because of our ability to share our lives when climbing and when not. I’m lucky in that I’ve been exploring the outdoors with female partners since I was a teenager and some of my deepest and most important friendships have been with the women with whom I’ve roped up, paddled, and journeyed.

CXC:  On your Instagram, we saw you ice climbing on Cannon and hiking the Whites–are you based in New England?  What are your favorite climbs in New England?

MB: Indeed— I live in the Mount Washington Valley. I came out here in 2008 for the Mt. Washington Valley Ice fest and fell in love with the ice and mixed climbing, and a New Englander who is now my husband. It’s a fantastic place to live, climb, and explore.

Check out the trailer, learn more about the Legado Initiative, and see when the film will come to your city!