Today’s post we dedicate to all the dads out there, but specifically the climber dads: the men who balance a love for climbing and a love for their kid(s), who refuse to give up one for the other, but instead carry 20+ pounds of kid, toys, tents, and whatever might be needed to keep a potential meltdown at bay, on top of rope, draws, and climbing gear. We’re talking about the dads whose first purchase when they found out they were going to be a father was not a stroller or a onesie, but a pair of those little kid monkey Mad Rock shoes.

Before we get started with the interview, don’t forget to read mom climber’s interview as well. 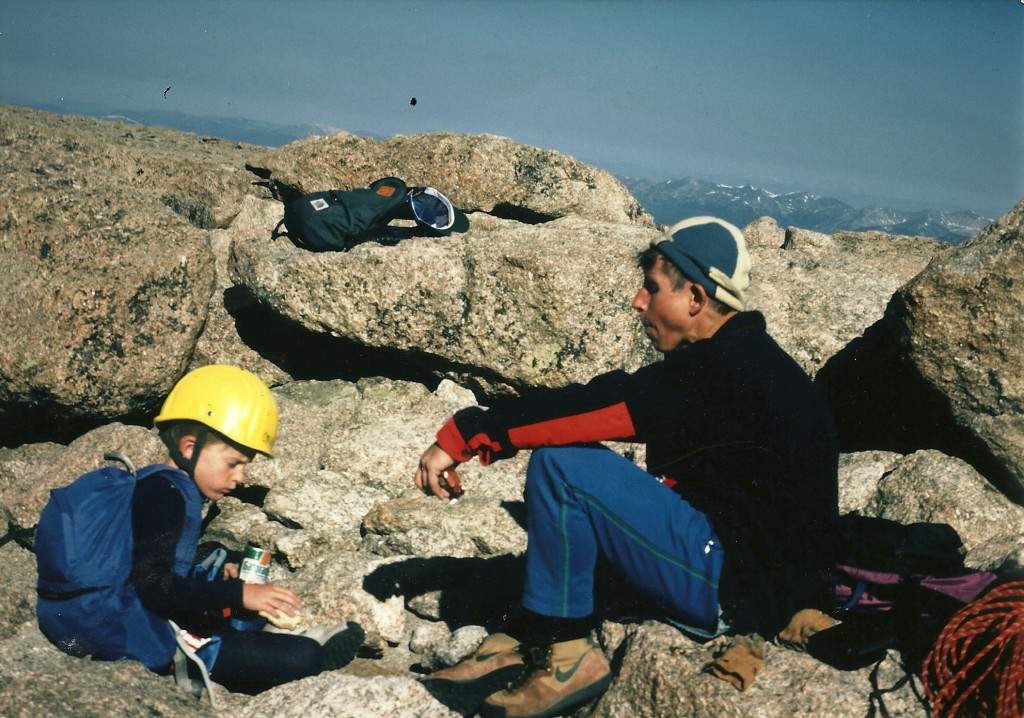 And let’s be honest, these are dads who love climbing and their kid so much that they’re willing to make the trek to the crag with the full understanding that they may get in only one climb – but find it worth it nevertheless. We asked three dads, Bill, dad to Finn (age 4), Mike dad to Jonathon (age 2), and Keith, dad to Chase (age 4 months) to share their experience as a climber dad. (And to be fully honest, we could have asked three moms and probably found similar responses, but as it is Father’s Day, we’ll let the dads shine for once). 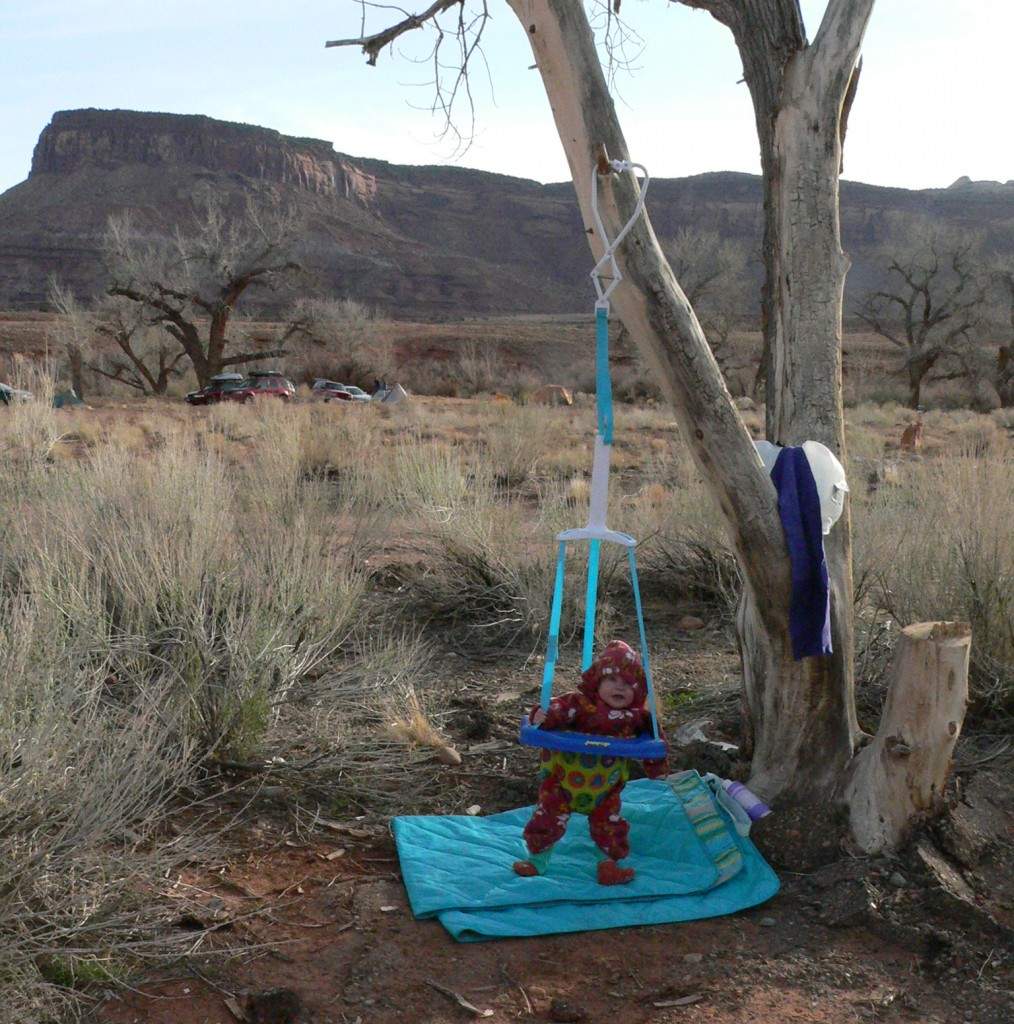 How long have you been climbing?

Bill: I’ve been climbing for about 20 years.

Mike: 12 years BC (before children) and 2 years since.

Keith: I’ve been climbing for ten years at this point.

Chase giving Keith a weight assist on his one arms

Being climber dads: Did you climb with your dad?

Bill: My dad has never rock climbed or had any interest in.  I’ve always thought he would have been an awesome climber though; he’s WAY stronger than me.

Mike: No. My dad’s thing is golf. When I try to predict how climbing will work its way into my relationship with Jonathon, I always come back to the golf analogy with my dad. I golfed a lot growing up because that was his favorite thing to do. I took golf lessons, went to an occasional golf summer camp, and played rounds with my family most weekends during the summer. None of this was forced or anything, I loved playing golf and still do.

Even though I eventually grew into my own passions and hobbies that replaced golf in the priority list of how I spend my ever-decreasing free time, I still get nostalgic about being out on the course at dawn on a summer day. Now I usually only make it out golfing with my dad once a year around Father’s Day. If this is how my son treats climbing in 30 years, I will be happy with that. If he makes it his own thing, that will be great too.

Keith: I dragged my Dad to the top of American Fork canyon and tried to TR him on a slab-rific 5.8 that led to a wildly exposed perch underneath a miniature arch looming above the cliff. He made 4 or even 5 moves and decided that climbing sucks. Looking back on it, I wonder if he ever wondered how the apple ended up so far from the tree. 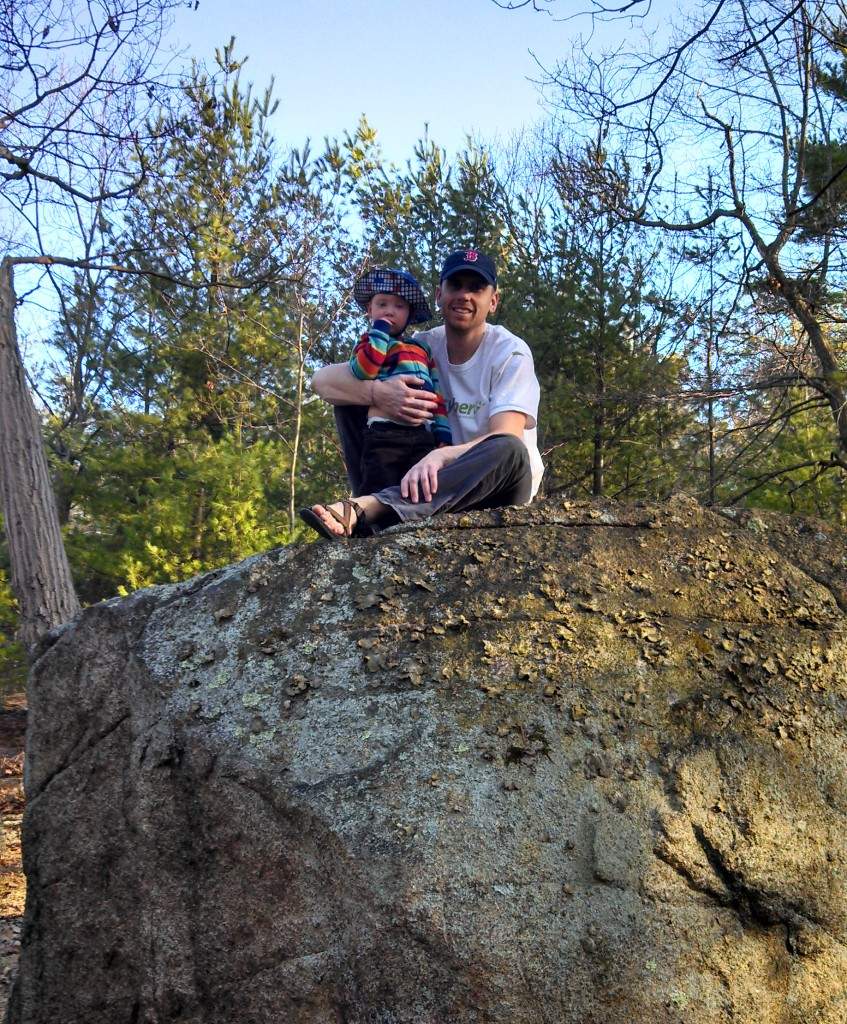 Mike and Jonathon after topping out a boulder

How has climbing influenced your relationship with your kids?

Bill: Finn is still only 4, and he has probably been climbing with me now, without mama, well over 100 times.  I find our climbing days to be very bonding because it is just the two of us (along with whoever we are climbing with of course) on an adventure from sun up to after sundown.

Mike: Hopefully not at all. There are way more important things than climbing, and I try to focus on these aspects of our relationship. Climbing is just something we do for fun. We play with toy trains a lot too because that is his thing right now. Toy trains don’t influence our relationship either.

Keith: Having a baby has actually surpassed any other training technique or paradigm I’ve tried over the years. Basically, climbers and trainers talk about progressive, incremental increases in resistance in order to make long-term gains in strength. A baby, when fed regularly, will naturally increase in total mass in slow, regular, incremental steps. Further, because babies demand attention (and so does the hangboard), the obvious solution is to integrate the two into a single, targeted, hyper-strength 6000 fitness program. Currently, I can do two one-arms on each arm with the baby girth-hitched to my harness.

At four months, he’s heavy enough to be good for a warm-up set of 20 bicep curls. Finally, “stress-proofing” your technique is essential to flawless performance under pressure. There’s no better stressor to test your mental strength than a screaming infant. Diapers get changed AFTER 4x4s, not during or before – this way, you’re both motivated to complete the workout more efficiently. 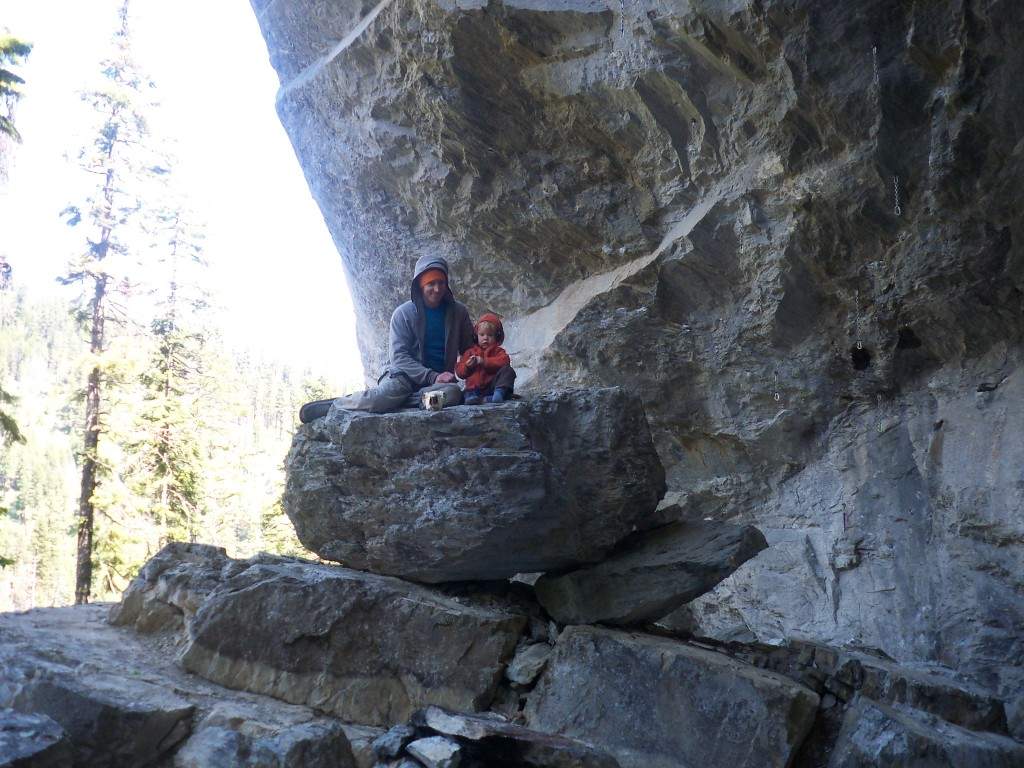 Finn and Bill during one of their many days out climbing

How has having kids changed your relationship with climbing?

Bill: The opportunity to enjoy climbing with Finn on a regular basis the past few years allowed me to go climbing a lot more, but on any given day I would have a lot less time to actually climb, so I’ve had to change my overall strategy around training and climbing outdoors.  The more I go climbing with Finn, the more opportunity I have to send but the less fit I actually get because of how little climbing I really get in.  I’ve had to resort to getting all my fitness at home where the biggest distraction from Finn becomes his wanting to Nerf sword fight all the time whenever we’re in the climbing shed. 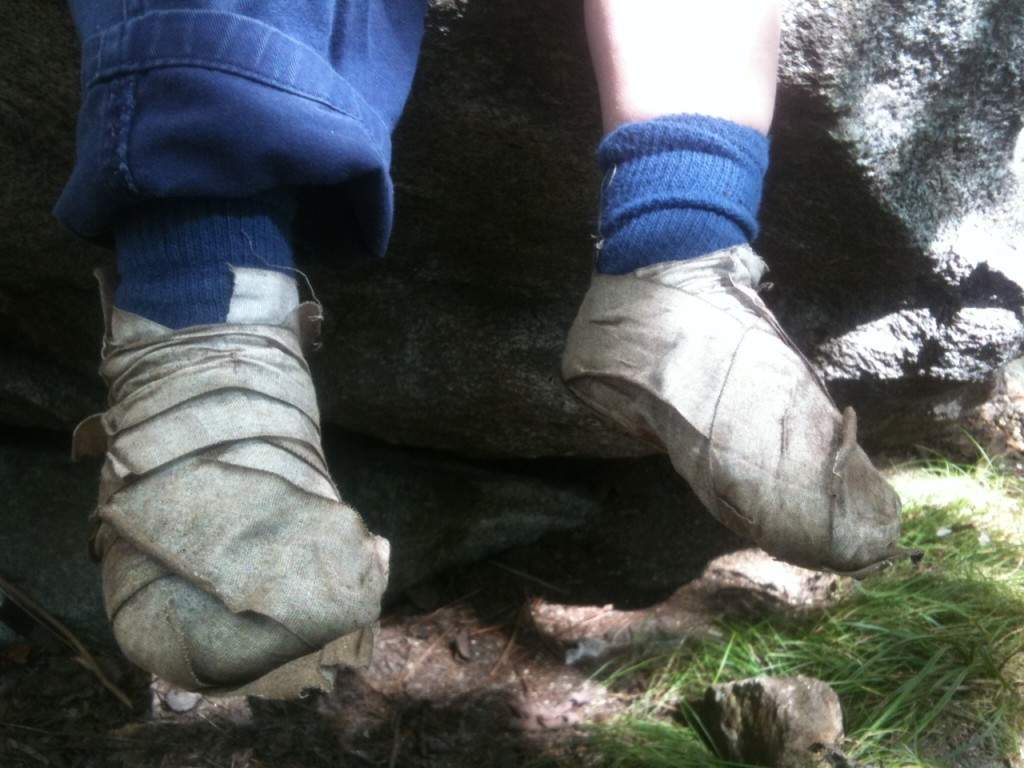 Finn’s “tape shoes” from when Bill carried Finn to the crag in his jammies only to realize he’d brought nothing for his feet.

Mike: Having a kid definitely works its way into the logistics of climbing trips, my wife and I choose to boulder more than route climb now because it is easier to keep tabs on a two-year-old when we are not attached at the hip. Multi-pitch climbing is out of the question when we go out as a family, but we really did not do very much of that anyway. I think I have started to value the time that I have on a rock a bit more now too. Since I make it out less frequently, I make the most out of the chances I get; no more complaining about conditions not being perfect.

Keith:I find a lot of value in Chase’s potential as a belayer and chalk-scrubber. With enough time, he might even be good to hang the draws and figure out alternate crux beta for me. I’ve also noticed that a little liquid chalk pre-treatment on my hands makes it a lot easier to hang on to a squirming, little drool machine. 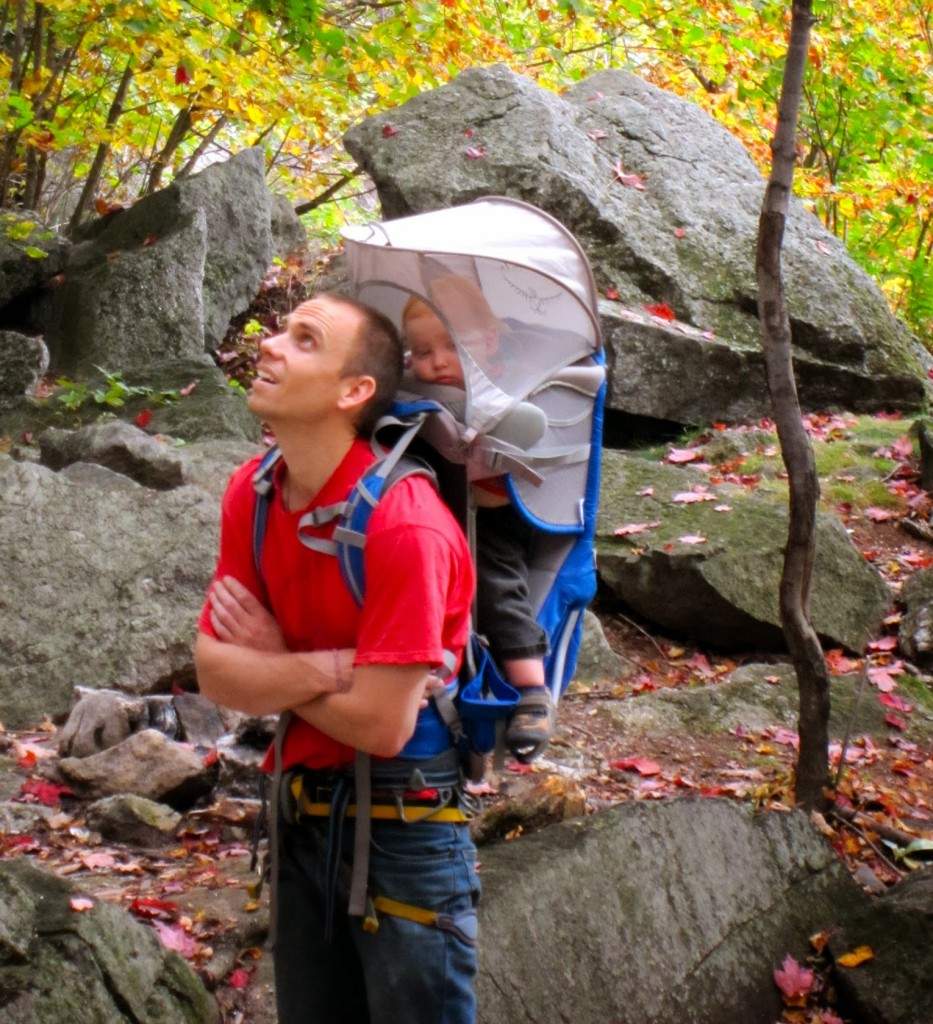 Mike eyeing his project at Shagg crag while Jonathon looks on

What is the best thing about sharing climbing with your kids?

Bill: I love going climbing with Finn for many of the same reasons I love going climbing with my friends; it is my favorite setting to be in, outside all day in beautiful places, being physical, with nothing else to think about except being present in the moment.  I’m glad that Finn gets to experience being in nature on such a regular basis in a way that so many children don’t.

Mike: My son is still a bit too young to share in the climbing; he still mostly comes along for the ride. I like taking him out of the city and into the mountains to expose him to things you can’t find in a 4.5 million-person metropolis. The other week we saw some waterfalls near Franconia Notch in the White Mountains, and he would not stop talking about them. That is the best thing.

Keith: The best part of sharing climbing with my infant is that I can make sure he doesn’t learn any bad footwork habits or develop any neuroses around running it out. Currently, he’s bouldering his age in months (V4), and I attribute this to our good foresight in switching out Teletubbies for the Big Up Productions library (mainly the Dosage series and Progression) on repeat. Chase likes to squeal back at Ondra when he throws wobblers. 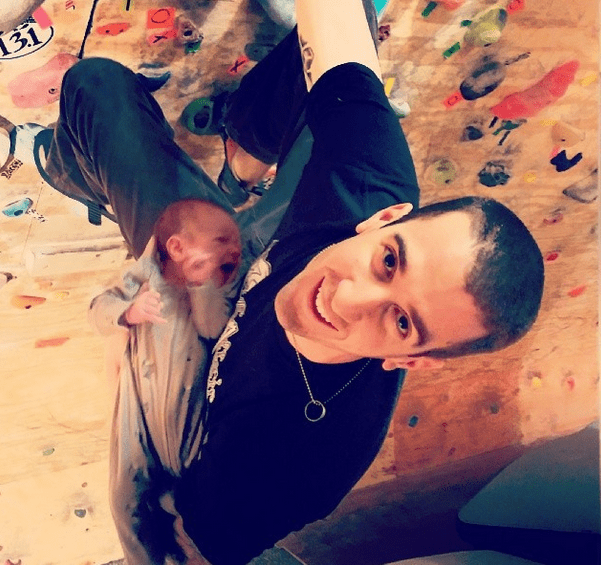 Keith, balancing training and being a new dad

So this weekend when you’re out climbing instead of visiting your dad for father’s day, give that climber dad you see a high five (and be sure to give your own dad a phone call!)