This is the first in a series entitled “Women on Lead, Katie Ives” which highlights women who are shaping the climbing industry and climbing community as writers, thinkers, artists, and entrepreneurs. 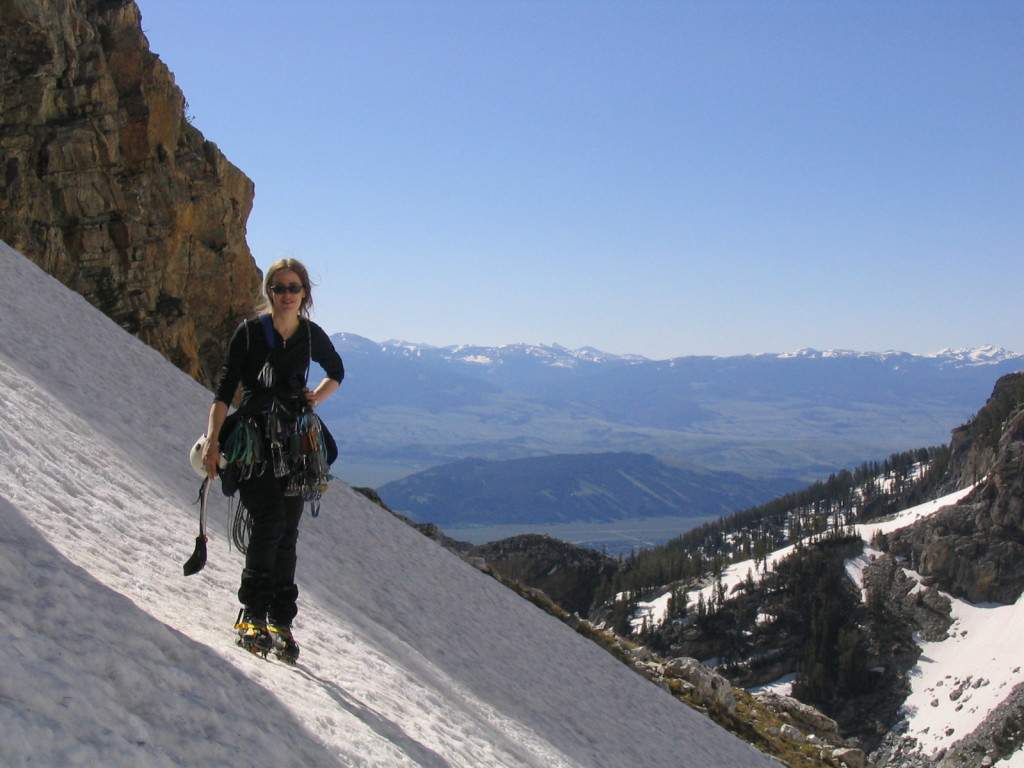 Katie Ives leads the way in the Tetons and in outdoor media. Photo by Dylan Taylor.

Mountaineering has often been hailed as the most ‘literary of all sports.’ While nowadays everyone is busy tweeting about their first ascents, we owe it to people like Katie Ives, Editor-in-Chief of the Alpinist, that there are still beautiful outlets for the thoughtfully printed word.

CXC: Katie, in college you already had a passion for literature and climbing. You chose a career that combines both. Tells us a bit about the milestones of your career. What was its most exhilarating move, the most challenging pitch?

KI: I’ve often thought that climbing teaches me how to write. When I was a graduate student in Iowa, my experiences on limestone cliffs helped me become more attuned to details: the light of the sky through a leafless November forest; the glint of crystals on the edge of an embedded fossil; the polished curve of a well-worn hold. Leading and soloing, I felt as though I could access parts of my unconscious mind and find new forms of creativity.

From my first day at Alpinist, I knew I was fortunate to be in a place that seemed like my literary home. I’ve learned from every writer whose work I’ve edited, gaining a sense of vast possibilities of ideas and styles. The span of time between the magazine’s bankruptcy in October 2008 and its relaunch in January 2009 was the most stressful in my career. I’m more grateful than ever, now, for the opportunities that I have.

Representing at the 2013 Banff Mountain Book Festival along with the other graduates of the Banff Mountain and Wilderness Writing program. Photo by Pat Morrow.

CXC: How important are special outlets dedicated to women’s narratives, such as Crux Crush or Alpinist 52?

KI: Even today, some climbers assume that stories of female alpinists aren’t as significant as those of men. To change that mode of perception, we still need to call attention to the value of women’s narratives. Otherwise, they can too easily remain invisible. A website like Crux Crush can train readers to notice those oft-neglected stories, emerging like constellations behind a nebula of clouds.

In the process of working on our own women’s feature for Alpinist 52, our staff became more keenly aware of just how many strong, committed female alpinists are active around the world. We got to know talented female writers who are now working on articles for future issues. I think that experience will help improve the gender balance in our magazine as a whole.

There has been a lot of debate, lately, about the notion of “first female ascents.” Sometimes those conversations leave out the reality that women have been involved in groundbreaking first ascents since the nineteenth century. If readers only encounter reports of first female ascents, they could mistakenly think that women aren’t doing anything else of note. I’d love to see increased coverage of innovative female alpinists such as Sílvia Vidal, Pat Deavoll, Natalia Martínez, the late Kei Taniguchi and others who have explored challenging new terrain in remote ranges—whose accomplishments transcend any notion of gender limitations. 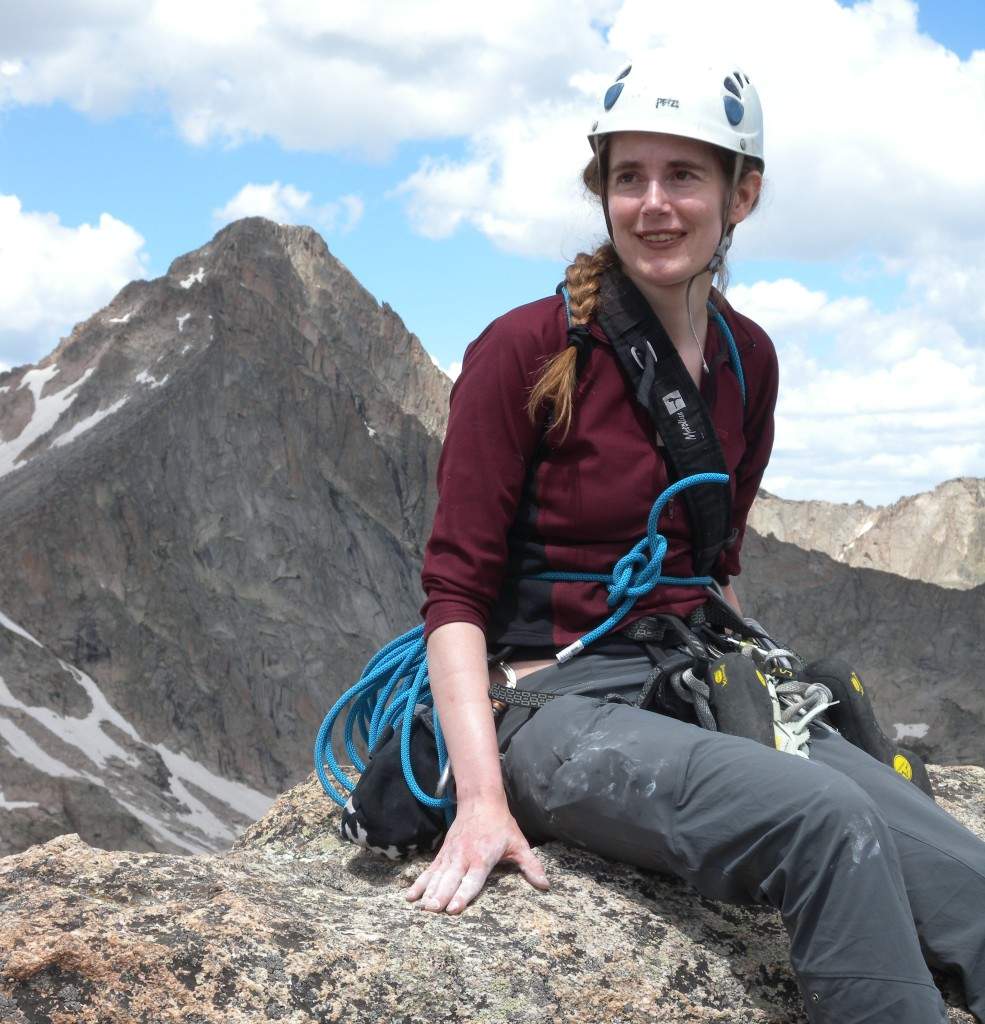 Taking in the view. Photo by Chris Weidner.

CXC: Are there differences in how women and men write about their climbing experiences?

KI: I tend to be wary of making clear-cut definitions of what’s male and female in literature. For a long time, many historians focused on the idea of alpinism as an “expression of masculinity.” Scholars such as Clare Roche and Ann Colley have pointed out the downsides to that approach. There’s the risk of ignoring the large numbers of women who have participated in climbing since the early days. There’s the problem of obscuring the presence of male alpinists whose approaches didn’t fit stereotypically “masculine” concepts of “conquest”—not to mention forgetting the existence of people who don’t identify entirely as either men or women.

At the same time, I’ve spent much of this past year studying books and articles on women’s mountaineering writing, and I’ve noticed a few common trends. For instance, during the nineteenth century, some of the early European female authors tended to downplay their alpine and literary accomplishments, as though they feared criticism for venturing beyond conventional gender roles.

Women’s voices have often seemed less loud than those of men—at times because societies have muted or silenced women; at times because of a kind of self-censorship. Frequently, however, it’s the quieter climbers and writers who have carried out some of the most imaginative ascents and stories. And even if many of these feats have remained unheralded, they can still form a chain of influence, each tale a link that flickers in the dark. Further to the topic; Katie Ives, editor-in-chief of Alpinist magazine, below.

CXC: How can climbing magazines help to make the climbing community more inclusive in terms of gender, race, and class?

KI: Throughout history, alpinists from diverse backgrounds have made extraordinary achievements that have received little notice in the mainstream media or even in climbing periodicals. By becoming more inclusive, publishers can help raise both climbing and writing standards—encouraging new talents and new voices.

In recent years, I’ve also realized that it’s important for editors to let people know that we’re interested in stories and images from under-represented groups—rather than just waiting for writers and photographers to approach us on their own. I encourage potential contributors to contact me.

While we devote a fair number of pages to significant new climbs, we’ve always had parts of the magazine dedicated to more literary approaches to the mountains. We’ve included personal essays, fiction, historical features, and even poetry. There’s never been a requirement to climb at a particular grade to write for Alpinist—we look for writers whose stories reflect the “spirit of alpinism” in its varied forms.

Definitely feel the “spirit of alpinism” on Grand Teton. Photo by Dylan Taylor.

CXC: We publish a lot of advice on how to climb stronger. What is your advice to climbers who want to become stronger writers?

KI: As many authors have pointed out, the acts of climbing and writing have a lot in common. When we sit down in front of a blank sheet of paper, we can learn to find a similar, meditative flow in the rhythm of sentences that rise and fall like the strike of an ice axe—or like the sound of breaths. Climbing helps me access that state more easily. I also “train” for writing by reading every day, paying close attention to the structures of other writers’ narratives and sentences, and noting what patterns are most effective for solving different literary “problems.”

There are many wonderful textbooks that can help emerging writers. I recommend Janet Burroway’s books as a guide to basic elements of craft. Becoming a writer is a lifelong journey: I still feel like a beginner, in many ways, but I love the adventure of it all.

Crux Crush would like to congratulate Katie on receiving the American Alpine Club’s  H. Adams Carter Literary Award for her contributions in alpine literature. Thank you for sharing your thoughts and insights.