Rock Roots Hannah Shea: In today’s edition of “Rock Roots“ Lily He brings us an interview with climber, cadet, and college student, Hannah Shea. We’re inspired by her love of climbing and incredibly grateful for her commitment to the good ol’ US of A. Here’s her story:

Hannah Shea was nominated (hint hint!) by her professor, Kevin Tatsugawa, who has seen her “grow and mature both as a climber and a person since I first taught her in the rock climbing section of my course 3 years ago.” Her maturity and intensity most likely stem from a decision she made a few years ago to join the Army. Yes, Hannah will be an Officer in no time, a product of years of hard work in ROTC while committing to the National Guard, completing her degree, and climbing any time she can.

Despite her many (important) obligations, Hannah was bitten by the climbing bug and has found a place for it.

LH: How did you get into climbing, and what made it stick?

HS: I go to Westfield State University and like all freshmen during their first year, I met all these new people trying to get you to “come here” or “try this”. I showed up to the climbing wall on campus and fell in love with it. I realized my brother had taken me climbing once in high school and I didn’t go back. I think climbing stuck with me in college because I was much more mature.

In high school, I was shy and didn’t like being in the spotlight – I thought everyone was judging me. Part of growing up my freshman year was realizing that my climbing friends were cheering me on because they wanted me to be better.

LH: How have you since taken climbing and integrated it into other parts of your life?

HS: When I first started climbing, I became good friends with the people who ran the gym. I started working at the gym because the personalities of the staff were so fun. They weren’t afraid to meet the random college students who had never heard of rock climbing before and were really open so that any student that came by themselves wouldn’t be intimidated (climbing can be really cliquey).

Staff at any gym will see a lot of inexperienced people, and showing some understanding towards these new climbers is really important. You get a good sense of beta for climbs because you’re staring at people a lot, and you can pass “lean left” or “move that” to these new people. Unfortunately, now in my senior year, campus interest in climbing is waning – we do have people who want to climb outdoors but lack transportation or equipment. 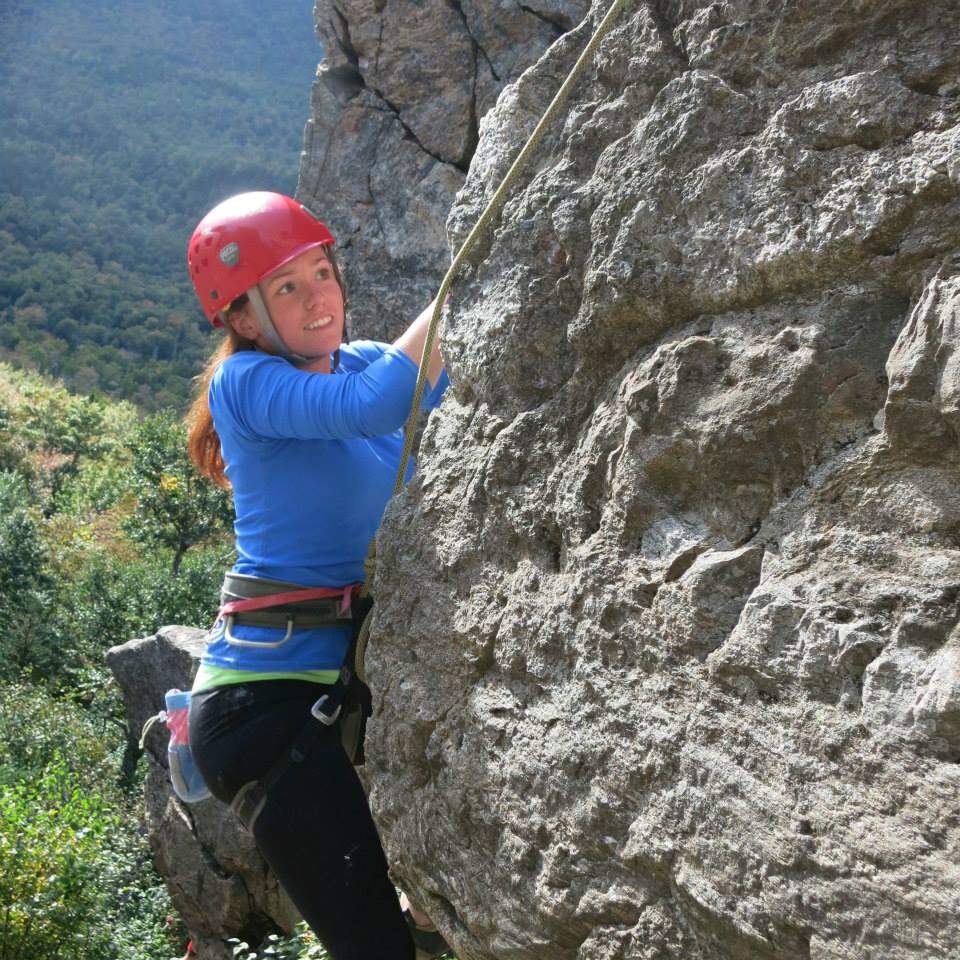 On a climbing trip with her professor Kevin Tatsugawa

I am also studying Wilderness Leadership as part of my major. After the military, I could definitely see myself delving into the wilderness response system. I’ve noticed that the people I admire in the climbing community all treat safety as number one, and I want to be a part of that. It’s always good to be a person who others can turn to in an emergency, and it’s even better when more people can take on this responsibility as well.

LH: You dedicated a large part of your life to the military, and after graduation, will be going into the reserves as an intelligence officer. How did you make this decision?

HS: My grandfather, uncle, Dad, and brother have all exposed me to military life. My dad is in the Navy reserve and was deployed to Iraq twice. He was great about separating work from family life, so he just seemed like a normal dad to me. I remember the exact moment I realized I wanted to join the military – I was a freshman in college watching “I’m Coming Home”.

It’s a TV show that facilitates surprise homecomings for soldiers’ families, which always puts me in tears because I know what it feels like to have a dad come home from war. In one episode, a female came home to her civilian husband, and I realized, “Oh my gosh, that could be me.” 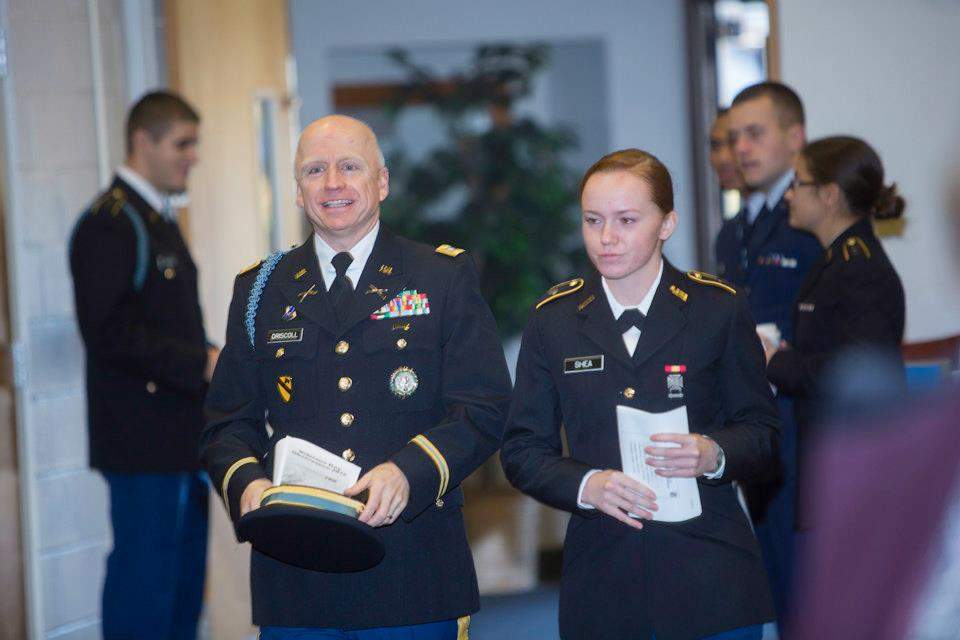 LH: It seems crazy to draw comparisons between ROTC and climbing – what you learn and the end result in climbing seems much less important than the impact you’ll have as an Army officer. But how has what you’ve experienced in the military transferred to climbing and vice versa? What is it like to be in an environment with so few females?

HS: At basic training, the ratio of males to females is 10:1. In ROTC, it’s even more skewed. Because we’re all training to fight together, the Army is a really tight-knit community…and people talk. I think as a woman, you do have to think about what you’re saying, what your body language is saying. But the big equalizer is that women have the same requirements as the men – we do ruck marches with 45-pound packs, and it doesn’t matter if you’re 110 pounds or 200 pounds, you still have to carry the weight.

In climbing, I still have to get to the top of the same climb as my big beefy guy friends, but I can be innovative with my beta and get around those (what-used-to-be) limitations. There will also be times in ROTC when I am frustrated with these “puzzles” – to plan logistics for a 4-day training trip with hundreds of cadets – and I can actually look back to that feeling of finally unlocking that hard crux on a route. It’s related that muscle endurance and mental strength from climbing into ROTC. 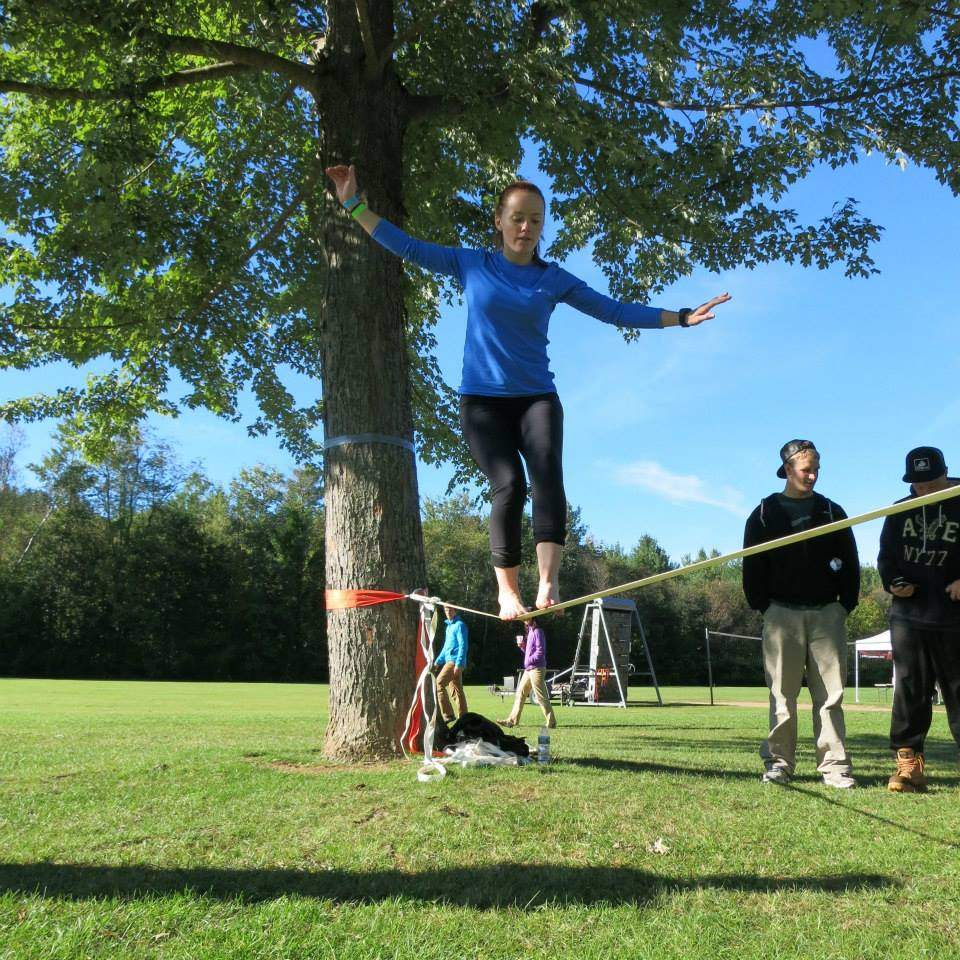 LH: Why do you continue to climb, and what are your goals for climbing?

HS: I love climbing because it’s a choice. Of course, I’ve chosen to dedicate my time to the military, but I don’t get to choose the days or times that I have to do things. And yes, I do have a strict “always improve yourself” and “what else can I be doing?” mentality, but I keep that personal challenge to myself. Relative to the strictness of the military and the stress of my academics, climbing is relaxing!

My goal is to really get back into climbing – this semester, I’ve cooled down the “climbing fever” because of my schedule. Interestingly enough, I haven’t really lost my climbing ability, and I think that has to do with the type of strengths I have. People tell me I’m good at being smooth, flowing my movements together, and committing to my next hold. My other goal is to become better at bouldering.

I hate bouldering because it requires so much power, but with my schedule, I frequently have to go to the gym alone. Across the board – old, young, tall, short, thick, thin, male, female – everyone has their fortes and power is not one of mine!

Hannah – First, thanks to you and your family for your service to our country. Second, your ability to integrate climbing into the rest of the life you lead is truly impressive. You remind us that there are no excuses! Hannah, we love your rock roots!