In celebration of Mother’s Day, we had the honor to interview with Robyn and Brooke Raboutou. Talking with the Raboutou duo it is obvious that mother and daughter share a mutual love, respect, and admiration for one another. As the founder, owner, and director of ABC Climbing, (of which Brooke is a member), Robyn has a unique relationship with her daughter. Their relationship is also evidence that the apple doesn’t fall far from the tree. While today Robyn is focused on coaching and physical training, her climbing resume includes the title of US Champion five times and World Cup Champion four.

Climber Robyn Erbesfield-Raboutou and her daughter Brooke Raboutou playing around.

At age 13, Brooke seems poised to follow in her mother’s footsteps. Their shared passion for climbing and pushing their limits, while keeping it light and fun makes this mother-daughter team a model for any relationship.

Tips for setting up a rad home wall: taking your woody to the next level.

CXC: Robyn, what’s the best thing about having a daughter as a student?

Robyn: The obvious for me is just having her with me all the time. I’ve been fortunate to have climbing children and in this case a climbing daughter. Since she’s been itty-bitty she’s been impassioned by climbing. I know that some parents will say, “Oh, my child doesn’t care much about climbing or doesn’t seem to have any interest.” So I feel quite fortunate that Brooke loves climbing as I do. In fact, I often find myself saying, “Wow! My kid loves to do what I do.”

So I feel lucky. Pretty much the heart of it is that I’d spend 24/7 with her if she’d let me. Obviously, as she gets older she’s going to want to be with her friends more, but I’m milking it for as long as I can.

CXC: Do you feel you encouraged Brooke to get into climbing or do you feel like it happened naturally?

Robyn: I don’t think I pushed or encouraged her. I encourage her during her climbing, but I’ve never had to encourage her to climb. In fact, it’s quite the opposite. I have to say to Brooke all the time, “Okay, I think we’ve had enough.”

CXC: What is it like for you, Brooke, to have your mom as a coach?

Brooke: I love having her as my coach most of the time because she’s a really good coach and she’s really supportive, but sometimes it can be annoying because I see her all the time [laughs].

Robyn: That’s the truth, sometimes it is too much for her. We’re lucky that it’s not often, but she’s got a good temperament so that helps.

CXC: Robyn, do you find it difficult balancing the roles of mother and coach?

Robyn: I’d like to say I don’t pay as much attention to Brooke or I try not to highlight some of the things she does. There’s really two things going on. One, when I’m coaching a group, her climbing can be an example. I have a great relationship with all the kids so if I say, “Watch Brooke do this move,” or “You might want to check in with Brooke because she’s already done this boulder problem,” – I can use her as an example.

All the kids seem to really support that we have the mother daughter relationship, and to be honest, I can’t think of any time that the kids have ever said, “You seem to favor your daughter,” or “Obviously you think Brooke’s the best because she’s your kid.” I think I must have a good balance on that because I’ve never heard a parent or another athlete complain.

On the same note, Brooke is fairly modest, so if I am encouraging her too much she’ll quickly remind me in a quiet voice, like, “Mom, okaaaay, I get it.” So there are times when I might have my eyes a little more glued towards her, but not to a point that’s ever been uncomfortable for the team or for the other kids.

CXC: That says a lot about you and about the community of climbers you’re working with. It’s great that you can still be her mom and that doesn’t have to be an issue, and there’s no resentment around it.

Robyn: The fact that she loves climbing makes the parents even fonder of the program and my coaching because they see that I’ve been able to help Brooke be the best climber that she can be. That’s sort of a test to my coaching skills. And seeing our relationship, that 95% of the time we do really well together – I think that helps the program.

CXC: Brooke, what do you admire most about your mom? CXC: Robyn, how do you think climbing has influenced the way you parent?

Robyn: I’m kind of lucky because parenting is easy for me because I have two good kids. When Brooke steps out of line it’s either two things: she’s hungry or she’s tired. Like a toddler. It’s not that complicated. Maybe this is the relationship between coach and parenting that goes hand in hand and seems to give us an advantage. I can look her in the eye and say,

“Stop. Obviously you’re hungry. And we’re gonna get some food. Hold your words if it’s not nice because obviously you’re just really tired.” And that’s because I know what she’s done. I know she should be exhausted after a 3 hour practice. And we haven’t had dinner. So when she’s snappy I know where she’s been. I know who she is and I understand her as an athlete and as a mother.

CXC: What about the climbing lifestyle? How has that influenced your parenting and how you’ve raised Brooke?

Robyn: We surround ourselves with a lot of adults and other climbers. Lots of famous young ladies like Sasha DiGiulian, Meagan Martin, Courtney Woods, Nina WIlliams, Alex Puccio. Brooke always had that influence from other young females and perhaps that changes how I parent because she’s not an average 13-year-old. She’s pretty savvy. We travel together so she sees the world with me. Those are some of the ways I see my parenting being different because we’re climbers. We’re not like any old family.

CXC: How has being a parent changed your personal relationship with climbing?

Robyn: My passion [for climbing] has always been there, but I think that it’s stronger having children that climb because I’m always thinking, “Where can I take them next?” and selfishly it’s like, “Where are we going next?” We’re about to go to South Africa this summer and it’s like I better take them now because Shawn’s 16 and next year, who knows, he might go off with Daniel [Woods], Paul [Robinson], and Jimmy [Webb] and I won’t even have a summer.

So I would say my climbing level is boosted because of my kids. As soon as I try a boulder problem or a climb outside…I have to be really honest and say I am constantly thinking, “Man, I’m gonna get shown up by these kids.” It’s not that I don’t want them to climb better than I climb, because of course my only wish is for them to be the absolute best they can be, but guess what?

I want to be the best I can be too! Also, my son is slightly taller than I am and my daughter’s definitely not as tall as I am, so as soon as she can do something I’m thinking, “I should be able to do it.” That’s the biggest plus of having Brooke as my climbing partner. I can see her do it and I’m like, “Okay, that’s motivating. I should be able to do it too.” So, it’s going to keep me young. 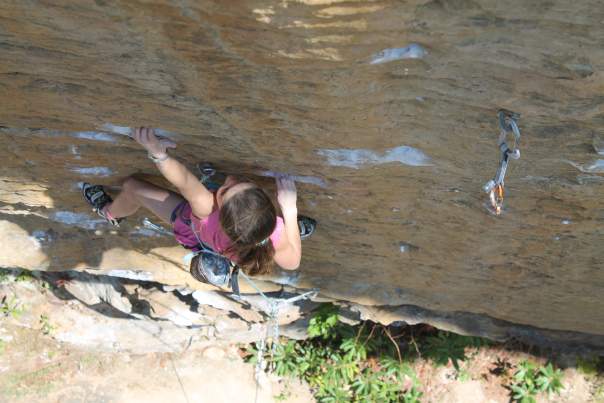 Brooke climbing God’s Own Stone, her first 5.14a. 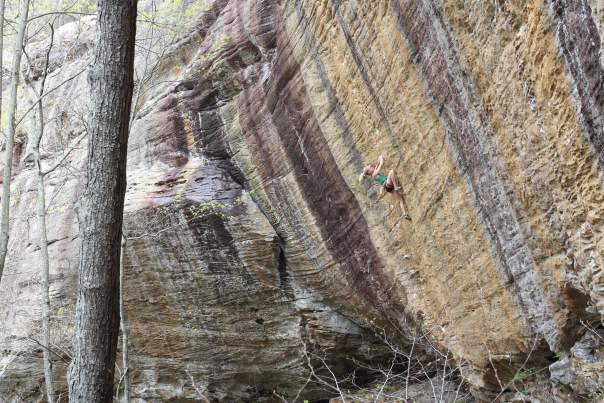 CXC: Brooke, do you feel the same way about your Mom? When she sends something are you like, “I gotta send that!”?

Brooke: Yeah. She can always give me the beta if I haven’t already given her the beta [giggles]. It’s nice to see when she climbs too because she has good technique and experience that I can learn from.

Brooke: I think we’re similar because we both share the same passion and we work really hard for what we want. We don’t really give up. But we’re also different because… I don’t know, there are just times when we would do completely different things.

CXC: Aside from climbing, what do you two like to do together?

Brooke: We like to paint our nails and do art.

Robyn: Yesterday I got a hand massage and my nails done… by Brooke.

Robyn: More than climbing shoes. And we like to go swimming. There’s pretty much nothing we don’t like to do together. We like being around the water and in the sun. 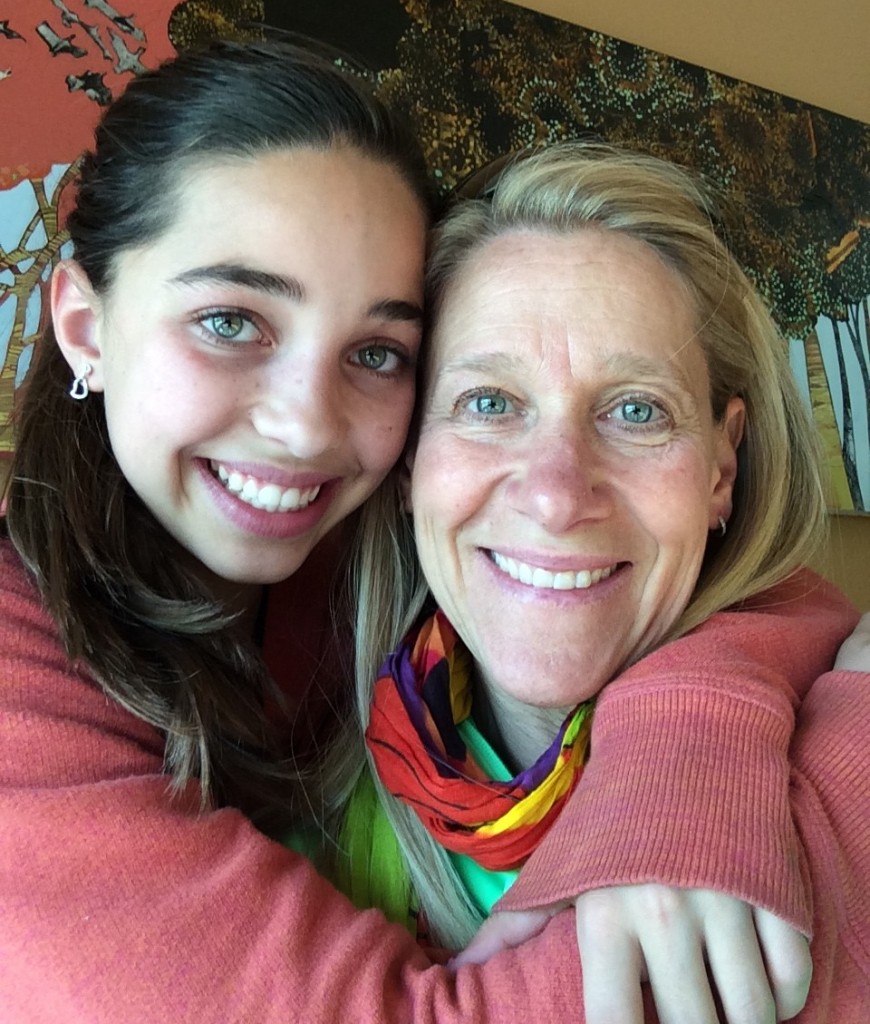 Robyn and Brooke just hanging out. Check out their Instagram for more fun pictures.

CXC: Brooke, we were wondering, looking toward the future, where do you want to go with climbing?

Brooke: Well I know I want to continue climbing for the rest of my life. I guess I want to go to World Cups like all the professionals and keep climbing outside and try to beat new records, but I don’t really know much more than that. I kind of want to do what I do now but as an adult and in bigger competitions and stuff.

CXC: That sounds good. We’re putting our money on you to climb 5.15! We think you can do it. No pressure, no pressure though! [Laughing] So Robyn, what are your hopes for Brooke’s future in climbing?

Robyn: For me, I just want Brooke to be happy. If Brooke’s future is to go do World Cups and travel the world and try to set new records and possibly be the first woman or young lady to do 5.15, wonderful! If she decides she wants to go play soccer, as long as she’s happy that’s great, and like she said, her passion is climbing. I know that the biggest change is that she’s going to likely spend a lot more time with the other young pros as well as some of her teammates who are also her best friends, so I might slide out of the loop a little bit which is okay.

Then again I might travel the world with her as she does those competitions so it’s really gonna be whatever she wants and where she finds happiness. That’s what makes me happy and I’m certain that she’s going to pick a path that’s just right for her.

Thank you so much to Robyn and Brooke for chatting with us with such honesty and lightness. We had a blast getting to know you. Brooke, you are one lucky girl to have Robyn as a Mom and coach. Happy Mother’s Day!

Check out more photos of Robyn Erbesfield-Raboutou and Brooke in Chris Nobles’ Women Who Dare. For more on ABC Climbing check out their Instagram and Facebook pages.