The Great Age Debate; Today we’ve got a great read from guest contributor John Burgman on a question competitive sports have been asking for decades… 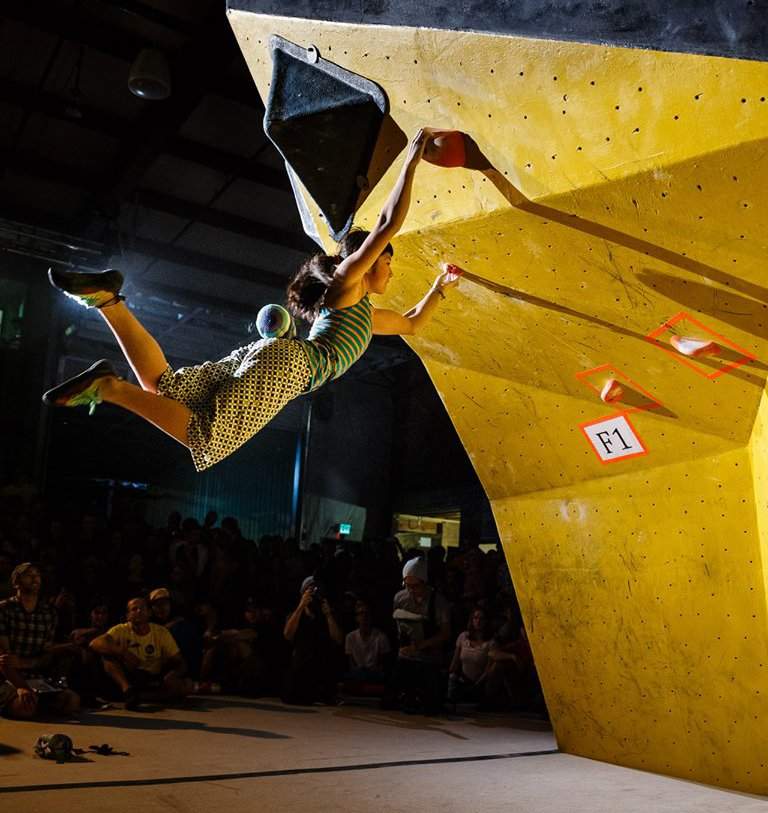 How Young Is Too Young For A Climber To Be Crushing It In Competitions?

If you went to the fridge for another beer at some point while YouTubing the recent 2014 Portland Boulder Rally, you might have missed the off-handed commentary about age restrictions that sparked discussion of the question on social media and message boards—in essence, reigniting a timeless debate that spans all sports.

Here are the details: while sharing play-by-play duties at the commentary desk, bouldering superstar Alex Johnson was asked how she felt about Ashima Shiraishi being allowed to compete in the Portland competition, despite the fact that Shiraishi is under 16 years old.

You can ask crux crush, here!!!

“A lot of these events lately haven’t been conforming to the 16-and-up, pro-event rule, so it has been interesting having [Shiraishi] thrown into the mix,” Johnson said.

Johnson was then asked her opinion on so many recent competitions not adhering to the widely-accepted age restrictions.

“Personally, for me, it is frustrating…” Johnson said. “But then, on the other hand, when [Alex] Puccio and I were 13, we were doing the same thing, competing against Lisa Rands, and now I feel bad about it. I feel like I should have waited until I was 16. It’s frustrating, but only personally because of my ego, I think.” 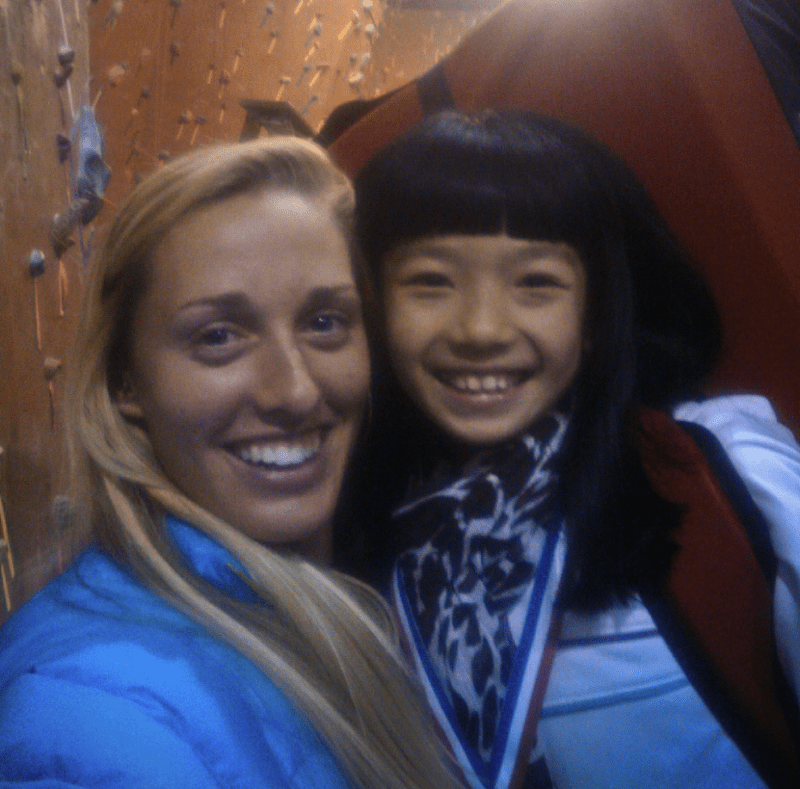 Alex and Ashima are friends first and competitors second. Photo from FiveTen.com.

Johnson was being candid, and as a veteran of the sport who has won big-time competitions, her opinion carries a lot of validity. Shiraishi is only 13 years old. The International Federation of Sport Climbing (IFSC), the governing body that tends to set that standards the trickle down to regional organizations, states in its rulebook, “Only competitors who are or will be at least 16 years of age in the year of the competition …shall be eligible to compete in a World Cup competition.”

That rule is the reason why we don’t often get to see Shiraishi, who would unquestionably be an elite participant in any age category, compete against other elite climbers like Alex Johnson or Alex Puccio.

But the debate isn’t cut and dry, and for a brief second, some of the climbing community on the Internet responded to Johnson’s comment with a number of varying thoughts on whether kids should be allowed to compete with adults. Let’s examine both sides of the eligibility argument a little closer.

Argument: Age Restrictions That Limit Eligibility Are A Good Thing

It’s uncommon in American sports to see children competing alongside adults, to the point where it just seems “wrong” in the eyes of many spectators. America not only segments its youth from adults but also often segments the youth into sub-segments: 16-and-under, 12-15, 10-7, 6-and-under, etc. The degree of division in some sports is almost ridiculous. However, most reasoning behind all age requirements likely comes down to the singular idea of protecting the young competitors.

The IFSC started in 2007, so we don’t have much linear climbing competition history from which to draw for analysis. The best we can do is attempt to draw rough parallels from a few other sports.

Competitive gymnastics may be the best comparison to climbing. Photo by The Chicago Tribune.

Competitive gymnastics is the sport most often referenced with competitive climbing, as there are some overlapping skills in terms of core strength, flexibility, and controlled full-body movement. Also, competitive gymnastics’ age restrictions are currently similar to those of the IFSC—competitors must be 16 years old in order to compete with adults. The supportive science for the age restriction cites issues such as the weaker bone structure of participants who are younger than 16 years old. “They’re still growing,” is the popular refrain of adults. Some children around this age also have coordination problems due to the gangliness inherent in puberty.

Potential mental stress and burnout of the young competitors is another justification for limiting their participation in high-stress, adult competitions. We’ve all seen the crazy-eyed parents who are clearly living vicariously through the athletic accomplishments of their young children, and such constant pressure can have long-term psychological effects on kids.

Argument: Age Restrictions That Limit Eligibility Are A Bad Thing

One of the biggest arguments for allowing youth like Shiraishi to participate in events with adult competitors is a theoretical one, but since all sports begin as theory, it’s hard to ignore. Competition is founded on the principle that the outcome will reveal the best entrant. Thus, age discrimination is unjustifiable. In more practical terms: if Shiraishi has the climbing credentials to pose a threat to the reigning champions, then it’s hard to rationalize her exclusion from major competitions.

Youth have bested adults in other sports—for example, tennis player Martina Hingis won a Grand Slam title in doubles at age 15, in 1996—so the sport of climbing wouldn’t exactly be breaking new ground by allowing youth to play with the adults. 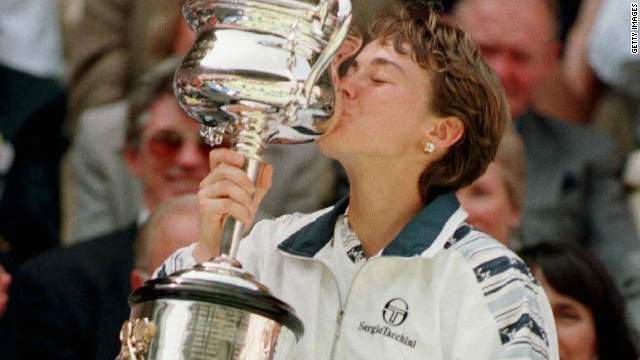 Martina Hingis makes tennis history at the age of 15. Photo from CNN.

The physicality argument for age restrictions in climbing can be pecked at as well. Unlike many other sports, climbing isn’t about relentless power. Rather, climbing requires power in a ratio to one’s own body mass. Shiraishi likely isn’t hitting the weight room, stacking unreasonable amounts of iron onto a barbell in hopes of building bulk; she’s simply carrying her own weight up the wall—no more, no less.

But in a more abstract sense, consider climbing in its fundamental iteration. There are mountains and crags and boulders all over the world, ready and open for anyone to climb, and it is laughable to imagine climbing on some of those routes or problems being deemed illegal based on age. In the purest sense of sport, nothing but ability matters—prejudice based on age (or anything) is just silly.

What Does The Future Hold?

Gymnastics has fluctuated on its age restrictions throughout history, and it’s not crazy to think that climbing might as well. It’s interesting to note that there was a period—in the 1960s and 1970s —when the best female gymnasts in the world were in their 20s. When famed American gymnast Cathy Rigby won the U.S. Nationals two times in the 1970s, for example, she was 18 years old and then 20 years old. But as gymnastics progressed in nuance, and the routines became more demanding, the sport started trending rapidly and significantly toward youth. Further to the topic; the great age debate, below.

Teenagers became dominant, to the point where the notion of someone becoming an Olympic champion at age 30—as was the case with Maria Gorokhovskaya in 1952—is inconceivable now. Gymnast Gabrielle Douglass was 16—the minimum age—when she won her widely-celebrated gold medal at the 2012 Olympics.

Could it be that climbing, a relatively recent sanctioned competitive sport, is destined for a similar fate to gymnastics? It’s not uncommon nowadays to have champion climbers, like Jain Kim, who are 27 years old or older. Might we see our own rapid and significant trend toward youth, with a majority of the future elites hovering around the 16-, 17-, and 18-year-old mark? 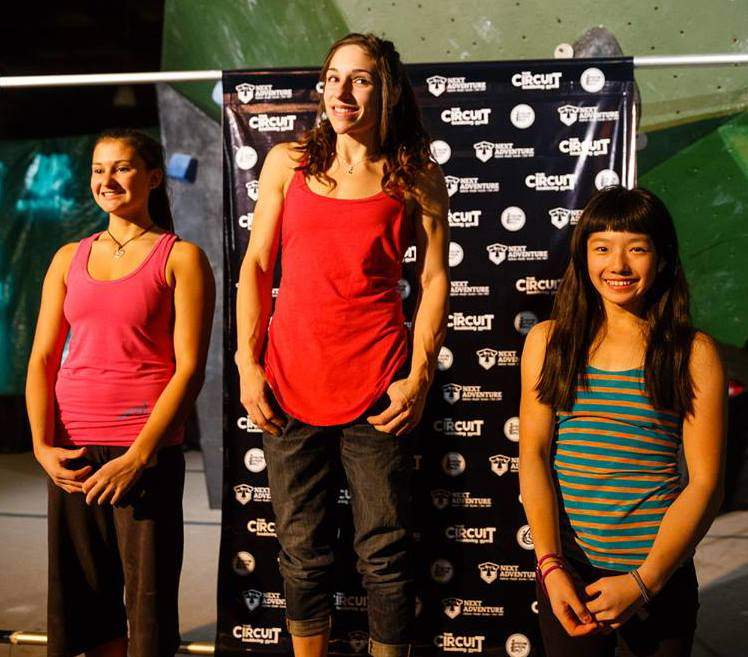 So the question remains—and will likely continue to spark discussion with every young gym rat that outshines the old dogs on the wall. Should kids be allowed to compete with adults? Leave a comment and let us know what you think.